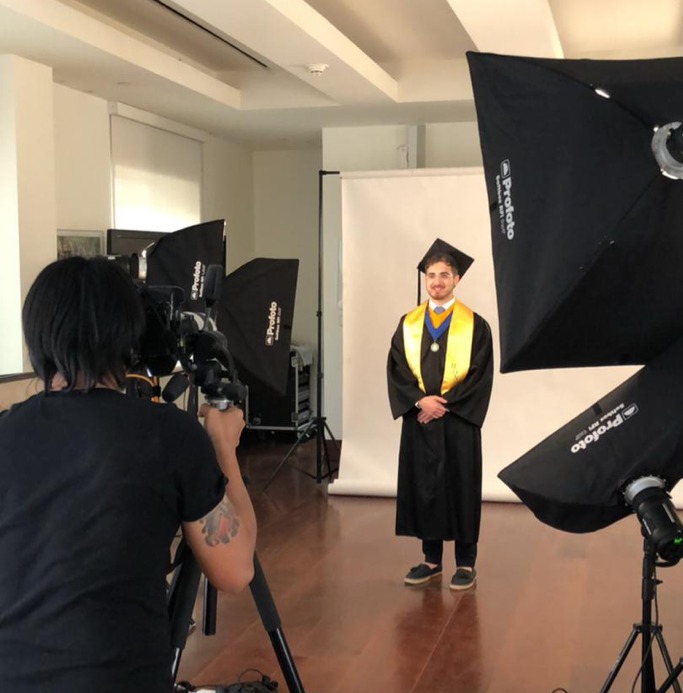 As a freshman at Georgetown University in Qatar majoring in international economics, Jamal Khatib was unsure about many things. He hoped to win the Qatar Foundation scholarship, applied for internships, and above all wanted to make his parents proud. At a 2016 Hamad Bin Khalifa University graduation event, Khatib met the former first lady Sheikha Moza, who listened to him spill out his worries. In response, she told him, “tafa’alu bilkhayri tajidu” [hope for good and you shall find it]. Now, as a senior about to graduate and leave the uncertainty of university behind, Khatib said, “I feel I did.”

Khatib was born in Damascus, Syria, and lived there until the age of 15, when his parents, concerned about the war, decided to move to Boston. This was a very difficult transition for Khatib because of the immense culture shock he experienced and the loss of everything that was familiar to him. Khatib said, “It was different to change the status quo.” He had to adjust to a new way of life while still holding onto his own culture. The language barrier was especially difficult. “When I arrived, I thought I could speak Arabic, English, and some French, but in the airport, I discovered that I only really speak Arabic,” he said. Everything from landing in the country to his first day of school was a challenge. “On my first day, I sat, I saw the teacher, and I asked her, ‘can you learn me this?’ Because learn and teach are the same word in Arabic,” Khatib said.

Although it was difficult to adapt to the environment, Khatib found a way to benefit from the absence of comfort and lifelong friends. He dedicated himself to studying English and succeeding in the rigorous academic environment of his new school. “The U.S. was tough because it was very competitive. I got used to that system so when I came [to Doha], I was able to shine,” he said. When Khatib began applying to universities he expected that he would stay in Boston near his parents, but when he heard about Georgetown University in Qatar, he became intrigued by the opportunity to get an American education in the Middle East.

For the majority of his life, Khatib has travelled back and forth between the Middle East and the United States, chasing the opportunities he dreamt about. This did not change after he began studying at GU-Q. Last year, Khatib travelled to Washington, D.C. for study abroad. He studied there for four months with the intention of getting an investment banking internship in New York City. He subsequently succeeded in securing an internship as a summer analyst at the Bank of Montreal in New York for the following summer. The work was intense and required dedication, said Khatib.

“The earliest I would leave [the office] was between 11 p.m. and 1 a.m., which was crazy,” he said. “It was very challenging, but with an amazing work ethic and my Georgetown education supporting me, I was able to excel.”

Khatib said he realizes that he has greatly benefitted from pushing himself to expand his horizons. “Don’t let your major limit you,” he said. “I’m [studying] foreign service. That doesn’t mean I’m going to only stick to that. I’ve done internships in investment banking, asset management, and the public sector. I’ve worked in housing as a CDA, and I tutored Arabic.” All of these experiences have benefited him in ways he did not anticipate, and with the usual amount of uncertainty, he is still quick to embrace any new opportunity.

Khatib plans to work for the Boston Consulting Group in Doha after graduation. He has a flexible view on life after graduation and remains optimistic. “You might host a comedy show at night, you might be doing research, you might be a diplomat, you never know. Don’t limit yourself,” he said.

He is eager to graduate, travel to see his family in Damascus and spend Ramadan there, but he will miss his life at Georgetown. “University is a great place to learn how to learn,” he said. “But once you leave, don’t stick to one thing. See what’s out there, choose what you want to do, and do it well.”