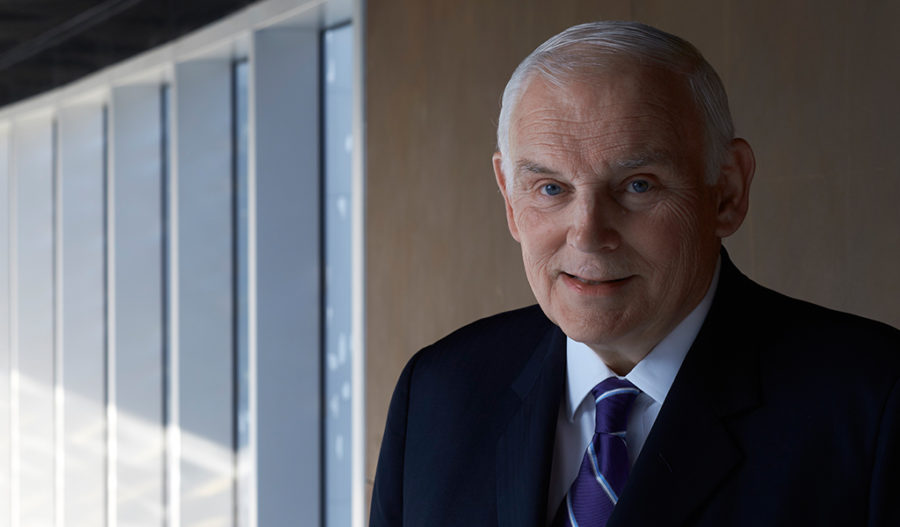 Everette E. Dennis, the dean and CEO of Northwestern University in Qatar, will step down in 2020, according to an announcement made by Northwestern Provost Jonathan Holloway on April 11.

Dennis took on the role of NU-Q’s dean and CEO in June 2011, leading the school into its 11th year of successful operation in 2019. He is to conclude his service at NU-Q on June 30, 2020 to return to his tenured faculty appointment at the Medill School of Journalism, Media, Integrated Marketing Communications in Evanston in 2021.

During his time at NU-Q, Dennis has overseen a number of important accomplishments. It was under his leadership that NU-Q moved to its state-of-the-art building in 2017, inaugurated an executive education program this spring, opened the university’s digital museum the Media Majlis in April, and created an institutional research program, including the annual publication of the “Media Use in the Middle East” survey from 2013 onward.

According to students, faculty and staff at NU-Q, the school owes much of its success to Dennis’ vision. “Dean Ev Dennis is a transformative leader and his vision and energy have brought great distinction to NU-Q,” said Mary Dedinsky, director of the university’s journalism and strategic communication program. “His legacy will be a country and region filled with well-educated and strategic media, journalism and communication employees who bring the highest standards of the professions to a dynamic country.”

“The news of him stepping down really upset me, and I consider myself lucky to have attended NU-Q during Dean Dennis’ leadership,” said Alessandra El Chanty, a communication senior and president of NU-Q’s Student Union. “I know that he’s very proud of everything the students are executing and achieving, and he will be dearly missed at NU-Q.”

NU-Q freshman Cade Aguda said he will miss the dean’s friendly and open disposition. “If he’d [Dennis] ever walk by, he’d say hi and ask me to stop some time by his office for a chat. It’ll be a shame that he won’t be around anymore.”

“It’s been an honor and privilege to work for Dean Dennis during my time here. He has inspired our community to continue to push forward, and I think that’s the lasting legacy too. It is the pride that we take in the work that we do that’ll continue by students, faculty and staff,” said Greg Bergida, the director of planning, assessment, and strategy within the Office of the Dean.

Prior to his appointment at NU-Q, Dennis was the Felix E. Larkin Distinguished Professor of Communication and Media Management at Fordham’s Graduate School of Business in New York City. He was also the founding director of the Gannett Center for Media Studies at Columbia University, and founding president of the American Academy in Berlin. He also served as dean of the University of Oregon’s School of Journalism and Communication.

Dennis completed his bachelor’s at the University of Oregon and went on to pursue a master’s from the S.I. Newhouse School of Communications at Syracuse University. He then earned his Ph.D. from the University of Minnesota. He held three advanced study fellowships at Harvard, and authored, co-authored and edited more than 45 books on media industries, media law and related topics.

The Office of the Provost will appoint a search committee soon to find Dennis’ successor, according to Holloway.

“Meanwhile, there is much to do here as we anticipate a search for new leadership and that transition. I will have time in the months ahead to properly thank all who have supported our school and me personally,” said Dennis in an email to the NU-Q community. “This continues to be the adventure of a lifetime for which I’m grateful.”