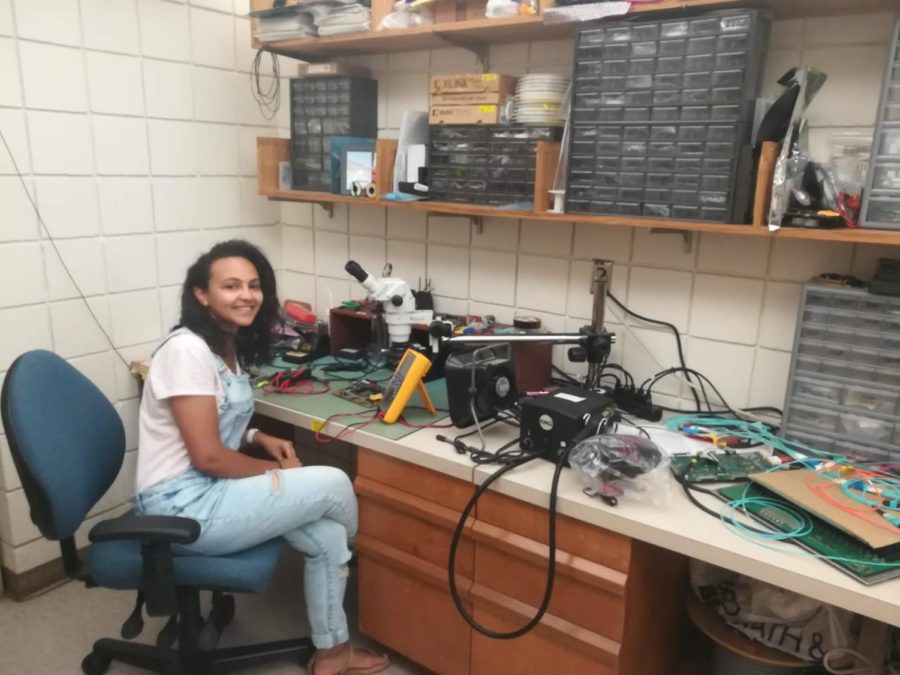 Alaa Abdalla at her physics internship. Photo provided by Abdalla.

On January 29, mechanical engineering senior Alaa Abdalla joined her classmates for a tradition known as the Senior Walk. Texas A&M at Qatar’s Class of 2019 gathered to mark one hundred days left until their graduation and celebrated by releasing balloons into the air. It was an emotional occasion, particularly for 22-year-old Abdalla, who had overcome many obstacles to make it to that point.

Abdalla first came to Qatar from Egypt when she was in fourth grade. She did not like Qatar when she first moved here, but it eventually grew on her. One of the main reasons she decided to stay in Qatar for university was because Education City was booming, and she noticed how diverse the student body was. “We have all of these varieties in one place,” she said. “When I went [to] study abroad most of the students [were] from the same place. So, I appreciate the diversity.”

Although Abdalla now finds joy in studying in Education City, she did not always feel this way. According to her, one of the greatest disappointments of her life was realizing she would have to stay in Qatar for university. She had a plan for her future throughout high school: study abroad in London.

She applied and got accepted with a scholarship to Middlesex University in London. However due to financial circumstances beyond her control, she was unable to attend. She began at TAMU-Q in 2015 instead. What was meant to be an exciting time in her life was instead a difficult one. Abdulla said she experienced depression throughout her first year. She was so fixated on that vision she had created, she found it hard to accept that it would not play out. “Back then I didn’t have this flexibility that things won’t always go as planned,” she said.

Abdalla eventually realized that although she did not expect her life to go down this path, it was okay for her to adjust. As Ahmed Hussain, a classmate and friend, said of Abdulla, “she is very determined… [she] will try her best to adapt to change.”

Reflecting back on her freshman year, Abdalla said her mistake was that she was so determined to maintain her GPA. Not that being a good student is not important, but she said she took it too far. “I burned out. I learned the hard way how to balance.”

There were times that did not require her to work so hard, or when she could have prioritized her wellbeing over completing an assignment that was not due for a while. “It’s fine to do a little effort at times when it’s needed, so whenever you need a lot of effort you have the energy,” she said.

Abdalla says she now can better recognize when she is unable to continue working. Rather than feeling guilty, she takes it as a signal that her body and mind need a break. For her, this can be reading or watching movies, specifically classics. She loves films by Charlie Chaplin and Alfred Hitchcock.

Those around Abdalla also noticed this change in her. Midhat Javiad, a friend and coworker of Abdalla’s, said that “she [now] has control over what she allows to affect her and what is not worth her mental energy.” Similarly, Hussain observed that when he first met her, “she wanted to make sure everything [was] perfect… she was always stressing about having the job finished like two days before it’s due so she can check everything.” In the present, however, he explains that she is more flexible: “She does deliver the work in the best picture possible but with less stress.”

One of Abdulla’s passions is travelling. It began in ninth grade, when Abdalla’s school won a regional competition for a research project about water and conserving resources. As a result, she was given the opportunity to travel with her school to London. “It was the first time in my life I [travelled] outside… I was so happy,” she said. Winning that competition was one of her greatest achievements, and it introduced her to her love of travelling, which she had the opportunity to explore further during her years at TAMU-Q.

Travelling became particularly important to her because in spring 2016, the second semester of her freshman year, Abdalla began having doubts about studying engineering. She had had different expectations for what it would be like, and her doubts only escalated as time went on.

Eventually coming to the realization that she did not want to continue studying engineering was disheartening for Abdalla. “It was very depressing,” she said. “I realized, oh my god, I’m stuck like this.” Changing universities would have been a challenge financially. In the end, she made sure she was busy outside of class. She made the most out of the opportunities presented to her and partook in every trip or club she could, gaining as much knowledge as possible. This included travelling whenever possible.

Some of Abdulla’s travels included attending the annual conference of the society of women engineers in 2016 in Philadelphia. In the Spring of 2017, she did a semester of study abroad on TAMU-Q’s home campus in College Station, Texas. According to Abdalla, these experiences taught her a lot as it was her first time living alone. She had to consider things that usually did not cross her mind when living with her family in Qatar, like buying groceries, cooking, and transportation.

Travelling also helped Abdalla to become more accepting of people who are different. “I used to be very narrow-minded,” she said. However, being placed in situations where she had to deal with people who were very different to her helped her realize that “not everyone I’m going to meet is going to be like me… I don’t have to be their friends, but I don’t need to judge. I can just accept them. It’s their life, it’s their choice.”

A regret Abdalla expresses is that she wishes she had started taking opportunities sooner. “Every year except my freshman year I actually did a lot of stuff,” she said. She managed to make the most of her time at TAMU-Q. She travelled twice with Qatar Science & Technology Park– first to Silicon Valley, then to Italy for a three-week long accelerator entrepreneurship program. She was able to visit major companies, network with entrepreneurs and technology professionals, and learn the process of creating a startup company.

Currently, Abdalla is considering pursuing a master’s degree in engineering education after she graduates. Despite her uncertainty with engineering at first, ultimately, learning is what drives her forward. “Once I learn something new… I feel like my mind grows. This pushes me to learn more.” To her, education is very critical, both because she loves to learn and because she wants others to grow as well.

Looking back on their time together, as both students and coworkers at TAMU-Q, Javiad spoke fondly of how she witnessed Abdalla come out of her shell and grow into the person she is today. “She [is] a bubble filled with passions… someone you can trust will positively impact those around her.”

For now, Abdalla is keeping her options open. She is applying to graduate schools as she believes she needs to study more if she plans to shift careers. At the same time, she is keeping an eye out for a job, so that she can gain some experience before deciding for certain. What is more certain is that Abdalla is ready to leave Qatar. “I think I want to move on. Go somewhere else, meet some new people.”