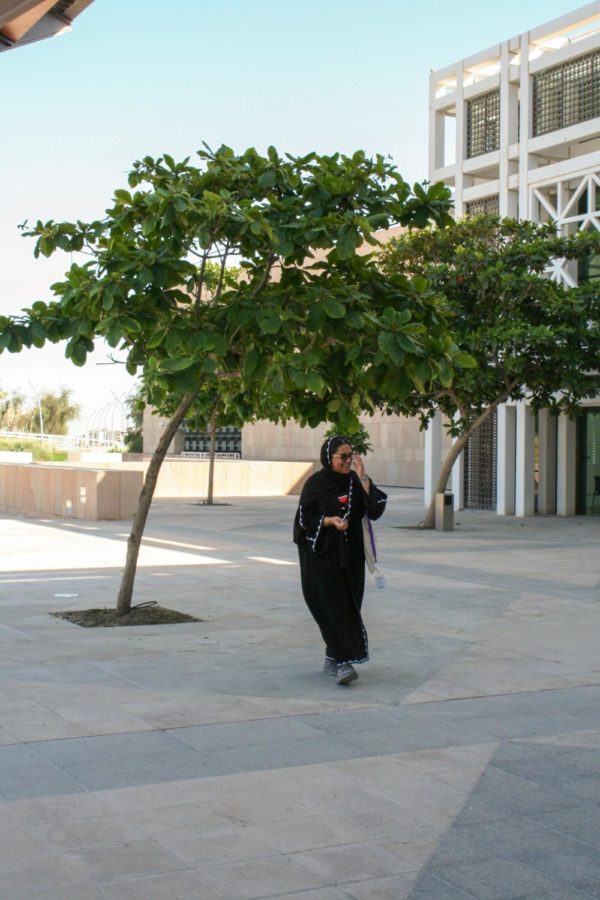 Sitting in Education City’s Torba Market on a Saturday morning, I was trying to focus. The crowds around me buying avocado toast and iced lattes, along with the overhead speakers playing “Happy” by Pharrell Williams, was making it difficult to write my paper. At the table next to me, a group of young Qatari women, identifiable by their black embroidered abayas, sang along and swayed to the music. Their youthful chatter enticed me and I couldn’t help but overhear snippets of their conversation. In the middle of this, the athan, or call to prayer, began and the music was hurriedly shut off. The young women also quieted, gathered their things and left. Seeing this shift in behavior caused my curiosity to pique. I wanted to know more about how young Qatari women living in a rapidly modernizing world balance their legacy of tradition and religion.

Qatar is a young country that is currently undergoing a lot of change, which is part of the reason that Qatari women are having to determine the way they fit into their country’s makeup. Qatar itself is learning to balance centuries of traditional life with the prospects of the future.  Because of this, Qatari women are sometimes viewed as being respectful of tradition and adhering to it above all else, and sometimes they are recognized for breaking stereotypes and presenting themselves as self-sufficient, empowered women. The real challenge, however, is finding a way to balance both of these perspectives. Tradition factors into both of these as it can obstruct but also support Qatari women.

An example of how tradition supports women is found in traditional Qatari clothing like the black abaya and shayla, or headscarf. Because the common Western perspective views religious modesty as oppressive or forced, it is often misunderstood. “Modesty for most people is a choice and I wish that people would learn to respect that. I take pride in my religion and in my culture,” Maytha Rashid Al Malki, a freshman at Georgetown University in Qatar, said. “For me it’s something that I really love and I do it because I want to do it.” A common thread among young Qatari women regarding modesty is that they feel it adds to their identity. It gives them a framework around which they can be productive. Jawaher Al Moawda, a communication senior at Northwestern University in Qatar, said that her modesty and identity as a Muslim woman gives her something to fight for. “The Western perspective is that the Arab woman is oppressed, she needs to be freed, and she is not getting all her rights. And my perspective of an Arab woman is that my education, my family, my background, my hobbies are what make me an Arab woman, not what everyone thinks I am.” Al Moawda hopes to show the truth of her decisions and how this contributes to her identity and the makeup of Qatari culture.

Shaikha Al Kubaisi, a freshman at NU-Q, said she is grateful for the support she sees being given to Qatari women among her professional and university communities. She said that Qatari society “praises women more because they know the hardship she went through to reach that level.”  These hardships are rooted in gender stereotypes that dictate that the role of women should be in the home. Like anywhere, women in Qatar have had to fight to break these stereotypes and are now being recognized for their accomplishments. And in fact, Qatari tradition has helped women to become empowered. Al Moawda said that the Arab perspective of an Arab woman is that she is dignified and should be respected. The unique part about the way that Qatari culture supports women is that it is so inherently part of the culture and is a social understanding rather than a written law. Qatari culture as well as Islamic custom demands respect for the mother and her role in strengthening the family. This is not an enforced rule, but it is recognized as the correct way for society to conduct itself.  For example, Al Malki was one of the few children in her family to go to an American school in Qatar. “Growing up, that was a big thing for me because all of my [extended family] were very traditional,” she said. Al Malki’s mother made the decision to put her in an international school rather than an all-girls school following a Qatari curriculum, and although she faced backlash from traditional members of the family, and their community in general, her decision as a mother was respected and helped Al Malki in achieving her academic aspirations.

Al Kubaisi reinforces this. She said that in her university environment she notices equality in the way female Qatari students are treated versus male students, from equal time in class to speak, to opportunities afforded to all students. For example, although there is a traditional separation between men and women, Al Kubaisi feels supported by the men in her life and in her classroom settings. She said that she appreciates the tradition of keeping a respectful distance between men and women, something that enhances her learning environments and greatly adds to her ability to succeed. Whether this success is in the workplace, academic excellence, or public work, women in Qatar, as with anywhere, benefit greatly from the endorsement of their skills.

Noora Al-Yafei, a freshman at NU-Q also comments on the way tradition impacts Qatari women. She said, “traditions [in Qatar], have over the years enabled girls to do what they want.” Al-Yafei gives the example of Her Highness Sheikha Moza bint Nasser, former first lady of Qatar, who she said is “a role model for all of us.” Sheikha Moza’s ability to balance her traditional responsibilities as a Qatari woman with her roles as a powerful and patriotic leader act as inspiration for many. Al-Yafei said that especially after the 2017 blockade between Qatar and other Gulf countries, when Qatari patriotism escalated, Sheikha Moza’s speeches and public action motivated young Qatari women to work hard at what they do and represent Qatar as best as they could. “She is a woman, representing the Qatari women as a whole, and this motivates others to step up,” she added.

The role of tradition in the lives of young Qatari women continues to be a complex thing to navigate, especially because tradition also plays a part in restricting women. Al Moawda admits, “in many cases, identity and who I am hinders where I want to go and creates roadblocks.” She said that when she talks about her plans post-graduation, many people assume she will get married and start a family. “That’s a possibility but it doesn’t mean I should stop everything else,” Al Moawda said. “I try to do things regardless of what people try to put on me just because I’m a Qatari woman.”

However, this progression forces Qataris to take other types of roadblocks into consideration. Many Qatari students have expressed concern about how they are viewed by expats or international students within Education City because of their preservation of tradition. Qataris are often elevated in social status which has created a harmful stereotype that they don’t work hard to succeed and get everything they need handed to them. Al Malki passionately described situations where she was made to feel “less than” or excessively privileged simply because of her nationality. “I feel like when people look at me they just see one thing: Qatari, money, connections, probably doesn’t care about education, probably isn’t smart.” Al Malki has seen international students express their surprise at her ability to speak fluent English and work hard for her grades. Despite this, Al Malki pushes herself to strive for success, as many other young Qatari women do, and plans on pursuing her personal goals after graduating. However, a common misconception many people have of Qatari women is that they rely on family connections or marriage instead of pursuing a career, so they have no reason to work hard. Al Malki said, “I put so much pressure on myself to not seem like that stereotypical Qatari.” Hessa Mohammed Al Khulaifi a freshman at NU-Q, also shared an anecdote from one of her university classes. Her non-Qatari partner expressed his uncertainty and even fear of being honest with her, and when asked why, he said, “I don’t want you to get me deported.” Al Khulaifi responded by saying, “I don’t want you [or anyone] to look at me that way, we’re literally at the same level.”

Some people might say that the reactions of the young women are unfair to their culture, and that they should be grateful for the benefits their established society gives them. However, Al Malki said something that struck me, and brought me back to that Saturday morning at Torba market, when I wondered about the group of young women. She said, “to have modern perspectives isn’t to lose your own culture and your identity and traditions.” This goes to show that in today’s world, it is easy to lose oneself in change and novelty, or be fearful and cling to what is known. But to find a personal balance between the two – old and new – is the ultimate goal.