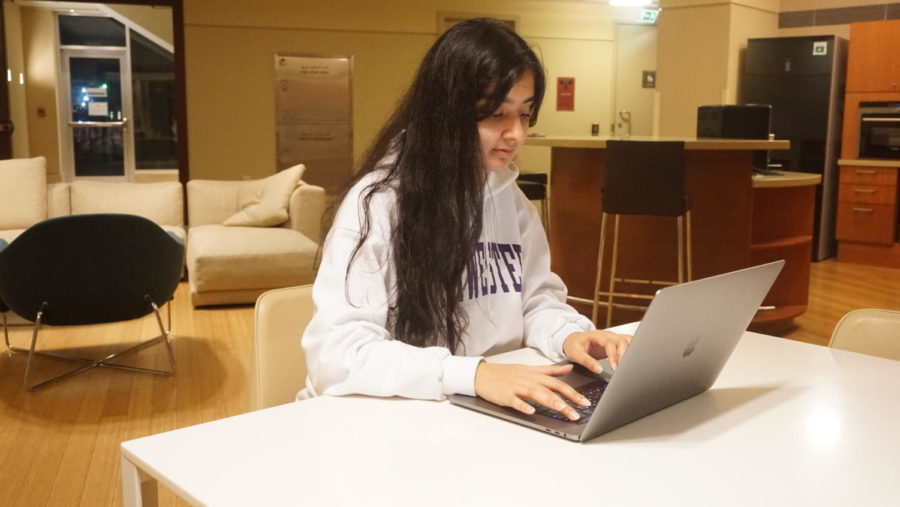 Arya Mainali, a freshman at Northwestern University in Qatar and Staff Reporter at The Daily Q. Photo provided by: Arya Mainali.

Almost a year ago, I came to Northwestern University in Qatar for the fly-in program organized by NU-Q’s Office of Admissions. As a freshly accepted international student, my first time in Doha was extraordinary and everything was beyond what I had imagined. But despite my instant love for NU-Q and everything it had to offer, I could not decide whether NU-Q was the right university for me.

I remember desperately staring at my mother on the second day of the fly-in program, hoping she would help me choose. She stared right back at me and told me that she would support me no matter what I decided. We were sat right outside of the dining hall, overwhelmed by everything NU-Q had to offer. As dramatic as it sounds, at that exact moment someone wearing a The Daily Q hoodie walked past us. I had already known about TDQ through my hours of research on the internet while I was applying to NU-Q. This small encounter reminded me of the initial excitement I had about NU-Q. That evening, I confirmed my enrollment and officially became a Northwestern Wildcat.

Joining TDQ instantly became a part of my NU-Q wish-list. When I came back in the fall of 2018 to officially start my first year as an undergraduate student, I started asking around about the student news site. As soon as the application opened for new reporters, I applied without giving it a second thought. I had always wanted to work for a newspaper and what better way to start than by working for your university’s news site

However, I did not think about all that comes with being a reporter. As a first-year student with limited experience in journalism, I had taken on TDQ too lightly and, to a certain extent, for granted. The first meeting in the newsroom was exciting but it also made me realize the responsibility that would be placed on my shoulders as a staff reporter at TDQ. Working for the news site meant that I had to find sources who were willing to talk on the record, take extra measures to obtain accurate information, and inform people of the truth without any bias.

The first article I ever wrote for TDQ was the hardest piece I ever had to write. The Nepalese students’ scholarship crisis was a big case among students back in Nepal, but no one in Nepal or elsewhere knew what exactly was happening. Fortunately, I had a few sources to start the story, who then linked me to more people who were willing to talk about the case on record. However, interviewing official sources was extremely nerve-racking. I kept asking sources to reconfirm their statements because I did not want to end up with a factually incorrect or incomplete piece.

As a first-year student, working in a newsroom can be tough. As much as I loved working for TDQ, each story felt like a road to failure. I was not incompetent per se; I was just inexperienced. It was hard balancing deadlines, finding time to write news articles and transitioning from high school to university. Coming up with a new pitch for every weekly meeting was another problem. I never seemed to find anything interesting happening around Education City. Every week, I would question my position at TDQ: do I even deserve to be a staff reporter?

Despite my self-doubt, I did not quit. I was late with my deadlines, but my editor was kind enough to understand that I was still learning to juggle my academic life with my professional one. As time went on, I went from writing vague story proposals to producing solid pitches, and my writing improved with each edit. By the end of the first semester, I had developed into a much better writer and much more professional reporter.

Although I did not accomplish as much as I had hoped in the first semester as a reporter, I do not regret applying to TDQ or being a part of the newsroom. The first few months were difficult and messy, but that only added to my experience on how to pitch, write and produce a concrete story. Each mistake was an opportunity for me to learn.

When I ask newly recruited reporters about their stories and how they feel about their work, frustration seeps through their eyes. It is hard being a reporter when you lack experience, and there is nothing you can do about it except to work hard until you are satisfied with what you have produced. However, most reporters who have worked for a news site are optimistic about their work. I have noticed that my attitude has changed over the course of a semester. For me, TDQ has gone from a dream to a harsh reality to now a job I look forward to doing.

Despite the complaints and fuss reporters create when working on an article, the happiness you get when your work gets published is indescribable. I had never imagined I would be writing a piece about my time at TDQ. If someone asked me about my work and experience here, I would say that it has been an extraordinary experience so far and I am grateful for it.