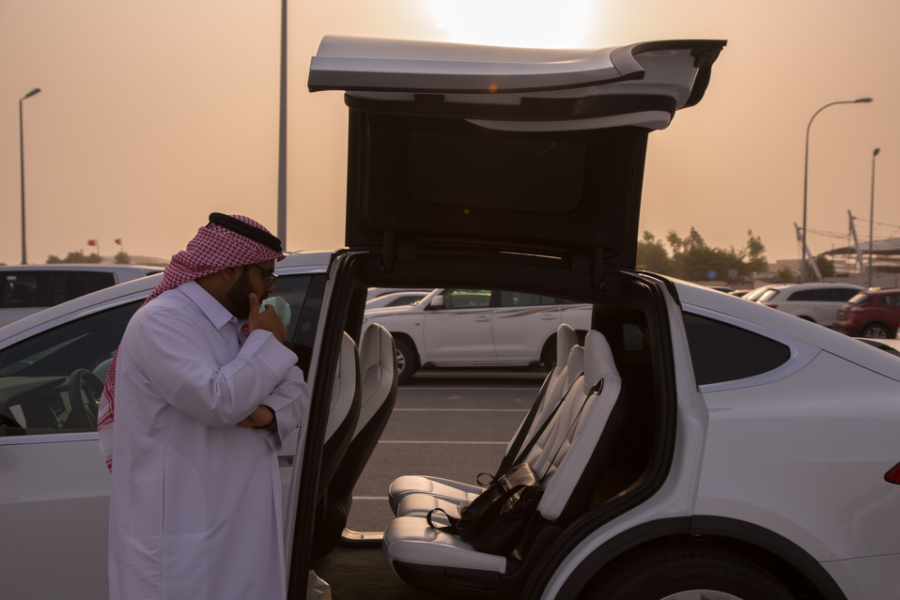 In a dark corner of the parking lot in Education City’s female housing sits Qatar’s ninth electric car charger. Installed with an unusual lack of fan fair and no press coverage, the sign above the charger reads, “Pilot product. Under Test Period.”

The charger is part of a Kahramaa, Ministry of Transport and Siemens partnership to reduce transport emissions by promising electric buses and 400 charging stations around Doha. “The Ministry of Transport has a target of reducing vehicle carbon emission by 10 percent,” said Eman Ahmed Ali, a researcher at TASMU Smart Qatar, a policy think tank based in Doha. Part of the government’s plan to do so is to encourage investment in electric cars, she said.

According to Zohaib Irshad, an employee in Qatar Quality Trading’s finance department, there’s a long road ahead before the plans become a reality. “We still need a lot of infrastructure to make it feasible, including at least a hundred car charging stations in Doha alone,” said Irshad. However, like the charging station in EC, the one installed at Qatar Scientific Club is inactive too. None of them are open to the public yet, said Irshad.

Abdullah Al Kuwari, student at the Academic Bridge Program, could not use one of these stations when his car was low on charge during a trip. “My brother took [the car] to the one in St. Regis and once he got there, he saw it was not even active,” he said.

Faced with the unreliability of charging stations in Doha, Al Kuwari relies on the charger he has installed in his home garage to charge his electric car, a Telsa Model X. He charges it overnight using a specialized supercharger he imported.

Even with a full battery, Al Kuwari said that he always hesitates before going on longer trips. “I can’t do a long trip out of the city and do my city errands in the same day. I have to charge it at some time in between,” he said. A one-way trip to Al-Khor from his home in Doha would consume 20 percent of the battery alone.

Yet he said he would put up with this if the features in his sophisticated car could work in Qatar. Autopilot, a system that allows the car to drive itself and one of Tesla’s signature features, is disabled. “[Tesla] have to work with the Qatari government and it has to be approved by them until Tesla can activate it,” he said.

According to Ali, the government is already debating the best way to implement this feature, just like other countries, and is already experimenting with unmanned vehicles. “Hamad Port has had an unmanned people mover since 2017,” she added.

Al Kuwari also struggles because of the lack of service centers for electric cars in Doha. For the slightest issue, he has to send his car to the closest Tesla center in Jordan. The entire process takes him 20 days and up to USD $2,000 to ship the car back and forth.

In spite of this, Irshad is still hopeful. “There is a market in Doha for them and we plan on also building electric SUVs to suit the locals needs,” he said.