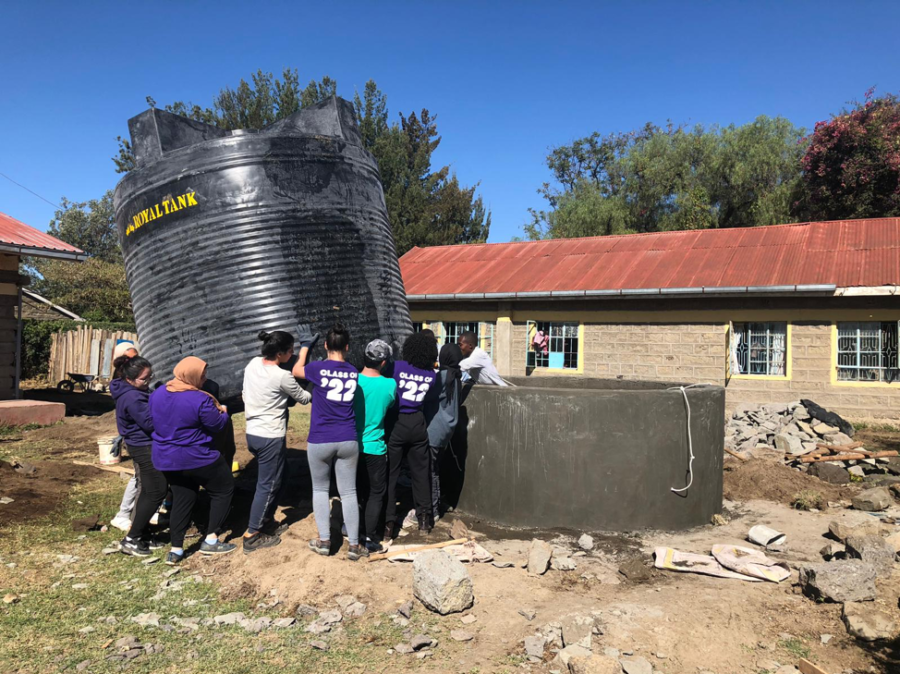 This spring break, Northwestern University in Qatar students traveled to Naivasha, Kenya, as part of the annual Service Learning Trip. The group focused on the global water crisis by building the foundation for a water tank at Manera Primary School. The 10,000 liter tank will be filled with rainwater and will service the school and surrounding community. By visiting Kenya, SLT in no way solved the global issue surrounding water, and there is still much work to be done. However, NU-Q students have made a small contribution that will hopefully serve the community well. Two students who went on the trip, Maryam Gamar and Nadege Bizimungu, recount their experiences and takeaways from Kenya.

The children shouted joyfully, stirring up the loose dust on the ground, and pulling eagerly on my shirt and pockets for attention. Happy but overwhelmed, I shouted above their voices, “Make a circle! Hands up!” Over the bobbing heads that were disregarding the strange English words I was saying, I saw a familiar face arrive at the edge of the crowd. It belonged to a tall girl, about 7 or 8 years old, wearing the school’s customary plaid uniform over bright green pants. Her eyes found mine and she reached out to the children, saying, “usimshike,” Swahili for “don’t touch her.” Obediently, the children backed away, their eyes attentive to make sure I would not disappear. This favor was one that I had come to appreciate and expect from my little guardian during the trip.

Her name is Namaya, and I first noticed her because she is so much taller than the rest of the children in her class. I learned that she was older than the pre-kindergarten children in her class because she had not been able to go to school until the year before and had to catch up on her studies. Despite this, I was struck by her maturity and calm observations. I could always find her at the edge of the crowd of younger children, waiting to clear a path for me or break up the schoolyard scuffles. Although she and I only knew very basic words in each other’s language, we found communicating quite easy. She taught me a popular children’s song and dance, and as the other children joined in yelling, “shake, shake, shake!” around us, I taught her the words: “smile” and “hug.”

Meeting Namaya was important because the theme of the service learning trip for me was connection. I formed relationships with people seemingly overnight or after just one conversation that seemed so natural despite being completely unexpected. On our first night in Nairobi, the capital city, our group stayed in a guesthouse called Camp Karen. While there we met Smiley, the resident driver/tour guide/conversationalist. I never found out his real name, but nothing would fit his personality better than this nickname because his smile is the most noticeable thing about him. One morning, the two of us sat down after breakfast and talked about African politics, something he was very passionate about. The conversation soared, and in the span of 15 minutes, Smiley recommended his favorite books, quoted African politicians, and gave me life advice, smiling the whole time. He articulated his worries about the world: everyday corruption in his country, global warming, racial misrepresentation, and more, emphasizing the most severe statements and sly jokes alike with a hearty laugh. The whole time I almost expected his words to turn into the solution for the world’s problems.

If I were to take one thing away from my experience on this SLT I would say that it taught me how interconnected we all are as humans. We are able to make connections on a level deeper than the things we usually consider to be our identifying factors, such as race, gender, and religion. We are all just people, trying to make our mark in the world, and while I went to Kenya to make my mark by positively impacting the lives of the people I met, I feel like they have left their permanent mark on me, too. Or, as Smiley said, “We will keep a part of your heart here in Kenya with us.”

Perhaps the moment Kenya felt foreign to me was when the kids at Manera Primary School called me “Mzungu,” a Bantu language term used in the African Great Lakes region to refer to “a white foreigner.” Since this is how they were calling the rest of the group and because of my lighter skin tone, they thought I was a Mzungu too. I told them in English that I was from Rwanda and I am black, so I am not a Mzungu, but these kids were less than convinced.

In that moment, I remembered a phrase from Trevor Noah’s book “Born A Crime:” a shared language says “we’re the same” and a language barrier says “we’re different.” Determined to prove my identity, I started speaking to the kids in my broken Swahili. Although they laughed at my sentences, they started teaching me more of the language. They continued to talk about Kigali, my capital city, and Paul Kagame, my president. They forgot about “Mzungu,” and started calling me “jirani yetu” (our neighbor). This warmed my heart and motivated me to keep improving.

The next day at the primary school we were serving, I attended a class made up of 70 kindergartners spread across three rectangular tables. As I observed, I realized that the kids sitting right next to me could not hear or even see the teacher’s one small book because she was too far.

Growing up, I didn’t get the chance to attend a prestigious school until high school. I went to a public kindergarten school that only taught classes in Kinyarwanda, my native language. Seeing these kids struggle in this class reminded me of my years in public school, filled with a lack of resources and confusion. As a person who wants to dedicate my life to shaping policy on my continent, this trip was another important reminder that education is a great equalizer to breaking the cycle of poverty. I used to go to a school just like Manera, and I know those little kids have the potential to be the next generation of African leaders if given equality of opportunity.

At the end of the trip, I felt more eager to learn and explore the politics of my continent. I still think short service trips to developing countries are a form of foreign development aid that creates dependency without addressing root institutional causes. However, this experience taught me that service learning can also be about individual growth and building identity and purpose. There is a phrase in Zulu that I like very much, “Umuntu ngumuntu ngabantu,” which translates to “a person is a person through other people.” This year’s service learning trip to Kenya was another personal reminder that everything I do in this world should reflect my capacity to help others in my community, the same way my family sacrificed everything to shape who I am today.