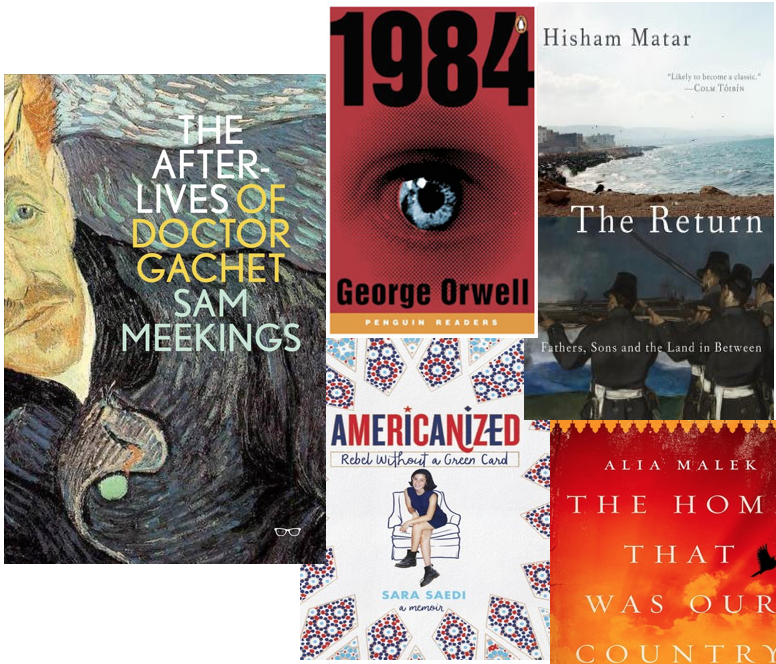 Through books, we retrace our steps back to our collective past. Through books we shape public consciousness. Books have the power to intrigue and amaze and captivate and overwhelm us. We read because we do not confuse the limit of what we know as the limit of all that can be known; we read to tunnel into worlds that could not be more different from (yet so inadvertently in sync with) ours. Below is a list of books that range from ones that are expansive and discursive to ones (like most of George Orwell’s books) that are short but still manage to broaden our horizons with stirring emotional and intellectual force.

AMERICANIZED: REBEL WITHOUT A GREEN CARD

“In my not so humble opinion, I believe that immigrants are the true American patriots. We never take living in this country for granted.” – Sara Saedi, Americanized: Rebel Without a Green Card

In her novel “Americanized: Rebel Without a Green Card,” Sara Saedi adds a new voice to America’s immigrant community that for too long has gone unheard and unacknowledged. The book follows her narrative from the age of 13 when she realizes she is undocumented and the map of her world is redrawn, permanently. With the existential threat of deportation lingering overhead, Saedi clings to a different vision of what the world around her could be, drawing on her teenage angst to become fully Americanized. Despite the lightheartedness of her arresting work of nonfiction, by compelling us to read in full thrall of the story of a young undocumented immigrant from Iran, Saedi manages to compel readers to shift their focus to uncovering the unwritten narratives of immigrant experiences and the untold stories of courage and bravery.

THE HOME THAT WAS OUR COUNTRY: A MEMOIR OF SYRIA

“There was nothing new for me about leaving Syria; separation has always been the defining condition of my relationship to the country.” – Alia Malek, The Home That Was Our Country: A Memoir of Syria

In “The Home That Was Our Country: A Memoir of Syria,” Alia Malek tells the story of a Syrian family in a world where sociopolitical battles have transcended national boundaries. Malek’s absorbing storytelling blends the narrative and the journey of one Syrian family with contemplations on Syria’s descent shared peripherally by countless others. In doing so, she tells the story ofa world that is frantically trying to make sense of one of the most intractable political crises plaguing the contemporary world. As you read about her and her grandmother Salma’s story, every step she takes to retrace her path back to her familial roots reveals the underpinning of all that she and her family have experienced over the past century.

George Orwell’s “1984,” written nearly 70 years ago, is a novel that depicts a dystopian future that doesn’t seem too far removed from the reality of our world today. Orwell’s book, which is driven by curiosity and written with intellect, imagination, and flair, offers readers a dip into a dystopian world dictated by the iron grip of a thoroughly totalitarian and dysfunctional society.  In many ways, this book is thought to be the foreshadowing of life in the 21stcentury and beyond – a life where Big Brother is always watching. Particularly with Trump consultant Kellyanne Conway’s use of the phrase “alternative facts” and the growing threat to democracy in our contemporary world, Orwell’s book continues to resonate with people.

THE AFTERLIVES OF DR. GACHET

“Meanwhile I have a portrait of Dr. Gachet with the heart-broken expression of our time.” – Letter from Vincent van Gogh to Paul Gauguin, Auvers-sur-Oise, c. 17 June 1890

In “The Afterlives of Dr. Gachet,” Sam Meekings, assistant professor in residence at Northwestern University in Qatar, tells the story of the life (and the afterlives) of the subject of one of Van Gogh’s final and most famous portraits, Dr. Paul-Ferdinand Gachet. As he follows Dr. Gachet, who walks a meandering and oblique path, Meekings retraces his steps through asylums, gory communes, fashionable salons and battlefields, seeking to understand the true depth and power of Dr. Gachet’s despondent smile and of the vast repository of grievances that is our collective history.

THE RETURN: FATHERS, SONS AND THE LAND IN BETWEEN

“What do you do when you cannot leave and cannot return?” – Hisham Matar, The Return: Fathers, Sons, and the Land in Between

When Hisham Matar’s father went missing in 1990, he was left confused, overwhelmed, and certainly unsettled. The scale of his emotional turmoil and anguish was equal to the mass upheavals, deaths and political anarchy through which countless Libyans were living under Colonel Muammar Gaddafi’s rule. In his book “The Return: Fathers, Sons and the Land in Between,”Matar writes about living in political exile, being clear-eyed about the pain of separation and loss, and the moments of familial fragility that left him in shambles.

Let us know if you found any of these books interesting and comment below on what other books you think we should cover!