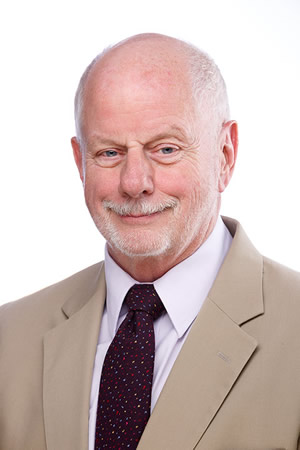 Generosity, kindness and a wry sense of humor are among the many traits for which D. Charles “Chuck” Whitney, emeritus professor of communication studies and former associate dean of academic affairs at Northwestern University in Qatar, will be remembered.

Whitney passed away on Feb. 9 at age 72 in Evanston, Illinois, due to complications arising from his recent lung transplant. To his former colleagues at Northwestern University in Qatar, the news of Whitney’s death came as a shock.

“I thought he was on the way to recovery and I was quite shocked to hear that he had died,” said Mary Dedinsky, director of the journalism and strategic communication program.

Whitney was born on August 19, 1946, in Asheville, North Carolina. He earned his bachelor’s degree in English at Clemson University and went to the University of Minnesota to earn a doctorate in mass communication. Prior to working at Northwestern, Whitney enjoyed an already prestigious career in academia, serving at Stanford University, The Ohio State University, University of Illinois at Urbana-Champaign, and The University of Texas at Austin, among others.

“He really had an impact in many different institutions over the course of his career, always tied together by his passion for understanding media and doing research,” said Everette E. Dennis, the dean and CEO of NU-Q.

Whitney began at Northwestern in 2010 as the associate dean for faculty and graduate affairs with an appointment in the department of communication studies in the School of Communication. In 2015, Whitney moved to Qatar to serve as associate dean of academic affairs for NU-Q. According to Dennis, as a member of the NU-Q community, “Chuck had high standards and wanted the school to get better and better.”

“Chuck was very student oriented. Students would often drop by and talk with him about all kinds of issues. He was a real friend to everyone here and contributed greatly to the school,” Dennis added.

According to Hissa Al-Mannai, communication senior at NU-Q, “Chuck was a kind and helpful man. He wanted everyone to do well and he genuinely cared about the students and their success.”

Whitney retired and returned to the United States in 2017, but remained close to the NU-Q community. “He never lost interest in the school. He stayed in touch with a lot of people here after he left, including some students,” said Dennis.

“The last time I saw him was back in May 2017 at NU-Q’s grand opening…. I never passed up an opportunity to chat to him. Whenever he walked past me, he’d smile and say, ‘You look like you’re up to no good’ or “Look, here comes trouble,’” said Al Mannai.

According to Whitney’s coworkers, his generosity and appreciation for life were some of his many great qualities.

“He read my book, which is so dense to read, but the thing that I remember is that he commented upon the jokes in my book and said that he appreciated them,” said Scott Curtis, associate professor in residence at NU-Q.

“Chuck was a wonderful cook and he also loved to read books on science. He gave me several books by some noted science writers. In fact, I have two books of his that I had hoped to return when I went back to Chicago in May. And I had hoped I’d see him,” said Dedinsky.

Whitney will be remembered for many things, including his contributions to NU-Q and its community, the strength of his character, and all the lives he touched. A reception was held in honor of Whitney’s life and scholarship on Feb. 17 at Northwestern University’s Harris Hall in Evanston.

A scholarship fund at the School of Communication honors Whitney’s late son, Stephen Wright. As Whitney wished for his memorial to be held in honor of his son, in lieu of flowers the family has asked for donations to be made in support of the Stephen Wright Whitney Scholarship.