Qatar vs. Japan: The Maroon Miracle 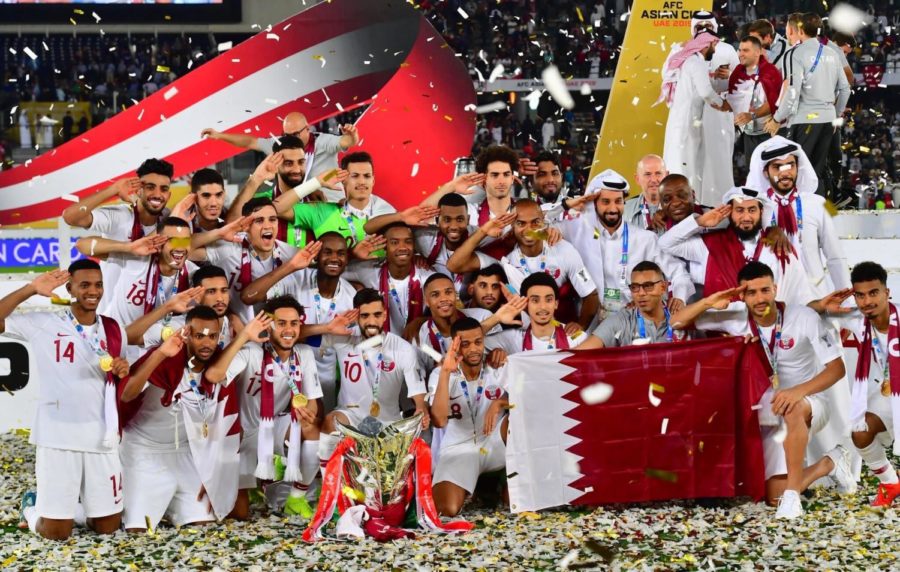 “[Almoez Ali] has just done it again! One-nil Qatar, incredible stuff,” declared the commentator on beIN sports as Qatar took the lead over three-time winner Japan in the 2019 AFC Asian Cup Final on Feb. 1. As he scored the stunning opening goal, Ali took his total goal tally in the competition to nine. In doing so, he broke a 23-year-old record in tournament history set by Iran’s Ali Daei, who scored eight goals back in the 1996 cup.

Qatar then went on to score two more goals courtesy of Abdulaziz Hatem and Akram Afif, and the game ended 3-1 in Al-Anabi’s (the Maroons) favor.

This sublime volley from Qatar’s Almoez Ali that opened the scoresheet in their #AsianCupFinal against Japan should be voted the goal of the Tournament. pic.twitter.com/DfObf9JbQe #AsianCup19

After scoring 19 times, conceding just once and playing 630 minutes of football over the course of three weeks of the competition, Qatar lifted their maiden Asian Cup. The awards ceremony took place in the same city where shoes and water bottles were hurled at the Al-Anabi players only a few days prior by an antagonistic Emirati crowd.

After losing their spot in the finals to Qatar, the UAE questioned the eligibility of a couple of Qatari players, as reported by The Washington Post. Furthermore, the New Arab reported that senior UAE. officials refused to take part in the medals distribution event held in honor of the victorious Qatar football team during the closing ceremony. This behavior is in line with the UAE’s approach towards Qatar since it, Saudi Arabia, Bahrain and Egypt imposed an air, land, and sea blockade upon the tiny Gulf state nearly two years ago.

When asked whether he expected Qatar to win, 33-year-old fan Husein Aziz Nezad said, “Not at all. From the beginning, I wasn’t expecting anything special but I felt [like] this team had everything in them, you know? They proved to everybody that even if everything is against you, you still can make it.”

Nezad was not the only one who was surprised by the victory. Lamya Ahmed Al-Derbesti, a freshman at Northwestern University in Qatar, was among those who claimed that they were taken aback by the result. However, she said that her thoughts changed when Qatar scored the first goal.

Qatar’s victory in this championship sent the entire footballing world into a frenzy. Every goal the Maroons scored, every game they won, sent many Qataris and non-Qataris alike into a shock. The truth, however, is that none of this should come as a surprise.  Aspire Academy in Doha, launched in 2004, is dedicated to nurturing Qatari football talent. It is this very initiative that is responsible for the recent footballing success of the country. Out of the 23 players in Qatar’s Asia Cup squad, 14 are Aspire Academy graduates; four, including Almoez Ali and Akram Afif, have been a part of the Aspire Academy project since 2006.

The national team manager Felix Sanchez is a success story in his own right. The Spaniard joined the academy in 2006 after many years of nourishing talent at FC Barcelona as a youth coach.  Sanchez was appointed the coach of the U-19 Qatari national team in 2012. In this capacity, he led the team to glory in the 2014 AFC U-19 Asian Cup in Myanmar. After his coaching exploits with Qatar’s team at the 2015 FIFA U-20 World Cup in New Zealand, he was put in charge of Qatar’s U-23 team, before being named the head coach of Qatar’s national team in July 2017.

[Translation: Thank you God, the gold for the gold! Congratulations to Qatar on the historical achievement, praise be to God. We used to say at the Aspire Academy: today a Dream, tomorrow a star … and today we are the champions of Asia thank God. Thank you everyone for standing with us, especially the Omani audience. The happiness cannot be described.]

The point being is that what has unfolded in the UAE over the past few days is the result of many years’ work, starting with Aspire Academy. Qatar’s football infrastructure has made constant progress. In the end, the talent nurturing program has provided the national team with several top-notch players.

After Qatar’s victory, many fans said they were beyond happy. “I’m so proud of this country so proud of these people and very happy even though … everything is against us [and] against this team but they proved to everybody that if you have the will you can do the impossible,” Nezea said.

Khalid Zaghmout, the organizer of the match screening held in the Education City’s Ceremonial Court, said, “It’s more than amazing. Our team were extremely polite. They played clean. And they were very kind to everyone even to the other players. This is like history. This will be in history. Beautiful!”

Najla Nabil, an onlooker of the match at the EC Ceremonial Court, called this victory a “morale boost” and added, “the odds were against them [Qatar] emotionally, physically, of course. The whole one and a half year of the blockade behind them. So, from a morale perspective, this is as good as it gets. This is the cherry on the top.”

With the country still in a state of euphoria, the football heroes were given a royal welcome by the Emir Sheikh Tamim bin Hamad Al Thaniat the airport. The team then celebrated their win with the Qatari people in a bus parade held in the West Bay area of Doha city, Al Jazeera reported. Now the country awaits their performance in upcoming events such as the 2019 Copa America and the 2022 FIFA World Cup. The latter will be held on home turf.

Once again, congratulations to the Qatari national team for defying all odds!