Qatar vs. UAE: Al Anabi, You’ve Made Us All Proud 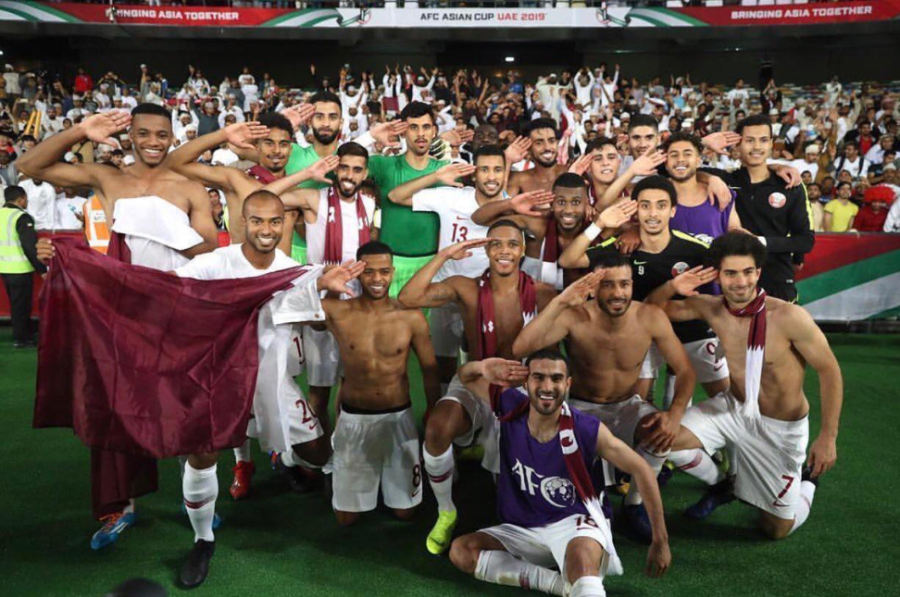 The Qatar National football team owned Tuesday’s match in the AFC Asian Cup and sparked celebrations globally by scoring not one but four goals against the UAE, a country where supporting Qatar can lead to up to 15 years imprisonment.

Despite the astonishing 4-0 victory, the Qatari players were pelted with shoes and bottles by Emirati fans throughout the game. However, that did not stop player Almoaz Ali from greeting the audience with a victory dance and a smile after scoring Qatar’s second goal. After days of stressing over the semi-finals, Al Anabi [The Maroons] are one step closer to winning the trophy on the same land that launched a blockade against Qatar more than a year-and-a-half ago.

Qatar, host of the 2022 FIFA World Cup, has won all six of its matches in the Asian Cup championship so far, including its match with two of the blockading countries: Saudi Arabia and the UAE. What makes this victory even more significant is that the team has yet to concede a goal, making it the first country to do so in the history of the continental championship.

It comes as no surprise that Tuesday’s match was more than just a game of football for both teams, despite it only being the semi-finals round of the tournament. The matches have been intertwined with regional politics, and the contentious relationship between both countries stems from the UAE- and Saudi Arabia-led blockade imposed on Qatar since June 2017.

Translation: [A game or a war? #emirates_media]

“This was so much more than just a game to everyone, and to be on the winning side of it gives me so much pride. Fan or not, everyone was waiting for the game,” Hessa Al-Thani, a communication junior at Northwestern University in Qatar, told The Daily Q.

Even before the game started, the UAE went to great lengths to dominate the game inside and outside the pitch. Though the ongoing conflict between both countries has made it hard for Qatari fans to travel and fill the stands in support of their team, many Omanis and Iraqis have been cheering for Qatar, showing great support to their neighboring country. For this game, however, the UAE bought around 18,000 tickets and handed them out for free to Emirati fans only, restricting any support for the away team, according to Al Jazeera English.

Despite these efforts, some Omani fans managed to attend the game, and though the stadium was mostly dominated by Emirati flags, they proudly held the Qatari flag up high and cheered for the players.

Translation: [People of Qatar, we are with you through all circumstances. #Qatar_Emirates]

During the match, Emirati fans disappointed many by throwing shoes and bottles at the Qatari team after Almoez Ali scored the second goal. This act, however, stood in stark contrast to the slogan of the competition, “bringing Asia together.”

While these actions angered many Qatar fans, they also prompted mocking comments on the UAE’s performance in the game.

The only Emiratis doing anything noteworthy with their feet. #AsiaCup2019 #qatarvsuae https://t.co/RftPGlGpTO

Translation: [They’re going home without a goal, without a cup, without manners and without shoes.]

Shortly after the game, opponents started deriding the celebratory tweets with comments criticizing the diverse origins of the players on the Qatar team. Regardless, the spirit of triumph was unwavering.

Moreover, some UAE players rushed to clean the pitch from all the garbage and shoes that their fans threw. And despite all the drama, the players showed respect to each other on the pitch.

Translation: [Okay, but did anyone pay attention to our players fixing what the fans have done]

Despite all the pressure and conflict, Qatar made all of its fans proud in this historic win against the UAE. They now advance to the finals against Japan this Friday. Tuesday’s match was screened in Katara, Souq Waqif, the Mall of Qatar, Lagoona Mall, and almost all cafés with TVs across Qatar. Doha was packed with fans celebrating each goal and cheering for the Qatari team.

Translation: [The end of the first half with the progress of Qatar on the Emirates by 2-0 by Almoaz and Khouki].

“We were very proud of how the players and the team did, not only about the four goals they shot, but for the constant team effort and energy they had throughout the whole match, regardless of all the pressure,” Aisha AlMuftah, a junior journalism at NU-Q, told The Daily Q.

After the referee blew his final whistle, cementing Qatar’s win, celebrations spread on the streets of Doha. Locals and residents started marching across the Corniche by foot and by car.

The celebrations spread worldwide. Not only did people celebrate in Qatar, but also in Muscat, Gaza and London.

Translation: [Hearts from Doha to Muscat]

Translation: [Distribution of sweets in the Gaza after our [Qatar] national team. #Qatar_Emirate #AsianCup]

Translation: [We’re done with it, tell them bye bye!]

Congratulations to the Qatari National team once again, and good luck in the finals!