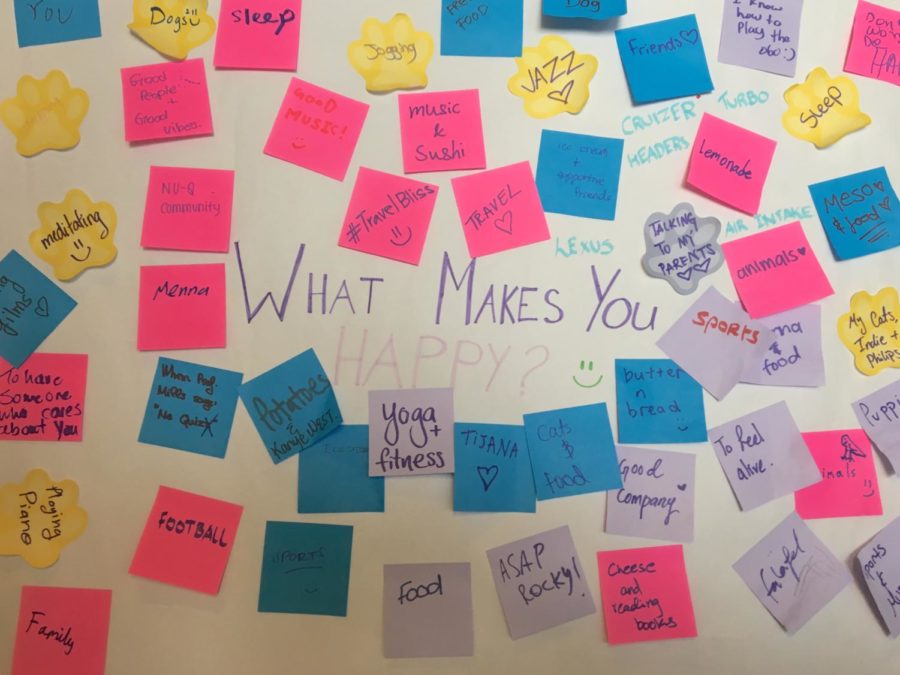 A poster created by NU-Q students and staff to raise awareness about mental health. Photo by Maryam Gamar.

Dropping out of high school was one of the challenges that Darrell Pinontoan faced after struggling with depression. Pinontoan, founder of Northwestern University in Qatar’s Mental Health Club, had lived the majority of his life in the Gulf, but in 2012 at the age of 12, he moved back to Indonesia where his family is originally from. After living away from his home country for so long, he said he no longer felt comfortable there.

Pinontoan said that at his new school he was bullied by students who saw him as an outsider because of his accent and different understanding of social norms. As a result of not fitting in, Pinontoan struggled with anxiety and depression throughout his high school career. In his junior year, Pinontoan visited Doha and realized that in the month he spent there he was happier than he had been for the past three years in Indonesia. He decided that leaving the toxic school environment was the best thing for his mental health. Looking back, Pinontoan said the experience forced him to reflect on himself but, more importantly, it made him realize the gravity of mental health and the importance of making a positive change.

Amina Awartani, a recent graduate of Qatar University and someone who has struggled with mental health in the past, affirms Pinontoan’s realization. “Mental health issues are real and we shouldn’t be afraid to talk about them,” she said. Crazy, weird, shameful, abnormal— these words and more are often used synonymously with mental health. However, Awartani argues that this should not be the case. “There’s a lot of stigma towards people with mental illness that we need to tackle,” she said.

October 10 marked this year’s Mental Health Day, a day meant for education, de-stigmatization, and slowing down, according to Patricia Collins, NU-Q’s counselor and coordinator of counselling and wellness.

Observing Mental Health Day in Qatar is unique because although mental health awareness is a topic of interest around the world, in Qatar it is sometimes viewed as culturally inappropriate. In fact, according to Awartani, a longtime resident, Qatar still has an older generation that doesn’t believe that mental health problems really exist. “They believe that depression is lack of closeness to God and that anxiety is just overthinking,” she said. This attitude has the potential to do harm because it prevents many young people from seeking help, which can lead to serious conditions going untreated.

Collins understands the lengths that university students in Qatar used to go to in order to get help. When she first came to the country in 2005, she said if somebody had a mental health issue they were required to go to an isolated mental health unit; this is intimidating, especially if the individual is not suffering from something severe. Today, care is being made more easily accessible by positioning psychiatrists in primary health care centers in Qatar, but there is still a lot of work that needs to be done. She added that along with improving services available in Education City, an important goal is to normalize mental health enough that students become comfortable talking about it regardless of what they individually struggle with.

When encouraging students to talk about mental health, it is important to consider the existing “culture” surrounding it, or the way that it fits into society. Pinontoan draws attention to the issue of using the names of conditions in everyday language without actually understanding their significance. It is very common to hear people saying things such as, “that guy is acting next-level autistic,” or “her room is so clean, does she have OCD?” Pinontoan says that this type of casual term-dropping is harmful because it diminishes the struggle that people who are actually diagnosed with a condition go through. “This can bring a bad light to those who actually are affected by [a disorder] and go through a hard time dealing with it,” Pinontoan said. In other words, promoting conversations about mental health is important, but the line between productive dialogue and diminishing its importance must be respected.

Respect and tolerance regarding mental health in general needs to become more widespread as well. In a day and age that centers around rushing to get things done, Collins finds it incredibly normal for lots of people to have mental illnesses such as depression and anxiety. This is especially pertinent for students who get stuck in the strained cycle of assignments and extracurricular activities. Collins advises that the practice of slowing down is the answer to many problems. She said that the instinct to immediately react after feeling something uncomfortable, such as stress, is detrimental to general mental wellness. “We have stress as human beings but we create more suffering for ourselves by the way we relate to the stress. I think the most important thing is to acknowledge [the stress], give it a name, and then validate it, say it’s okay,” said Collins.

Fueling the conversation surrounding mental health is helpful, but what is more important is inspiring people to take action. Within Education City the vast majority of people are young, passionate about current issues, and aware of the challenges we currently face. Awartani says that the responsibility of addressing mental health falls on the youth of today because we understand its importance and have the capability to make a change.