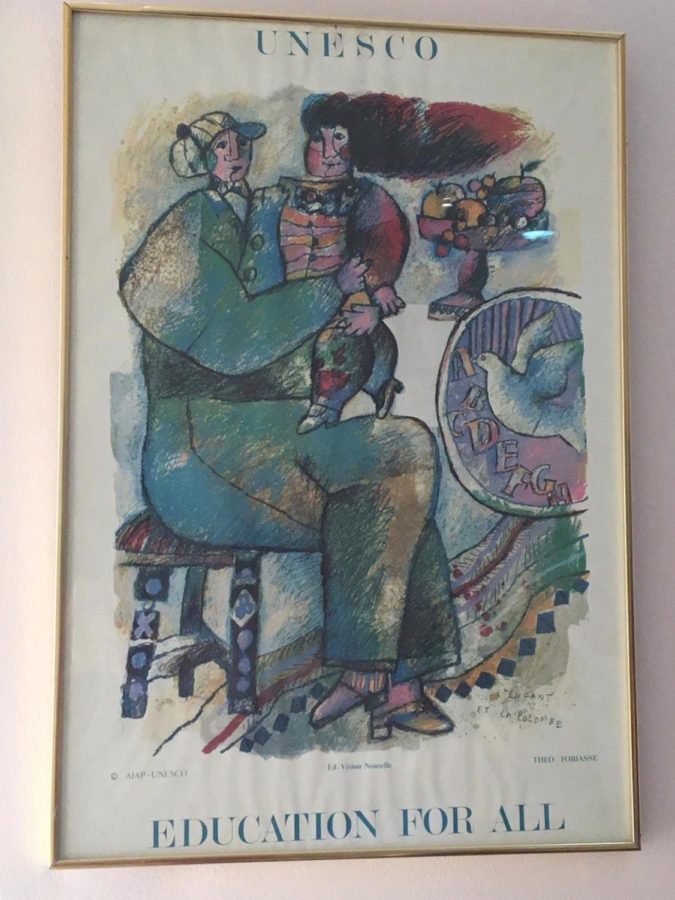 An Education for All artwork hanging in Maricel Fernandez's office in Education UNESCO Office in Doha. Photo by Shafaq Zia.

Education is not a privilege but a human right; that’s according to a new campaign launched by the UNESCO office in Doha in partnership with Qatar’s Ministry of Education and the Education Above All Foundation.

Launched at the Hamad Bin Khalifa University Student Center on Oct. 31, the year-long campaign will focus on the inclusion of individuals with learning and physical disabilities in mainstream schools. The campaign also reflects Qatar’s 2030 Agenda for Sustainable Development, specifically goal four which emphasizes the need to“ensure inclusive and equitable quality education, and promote lifelong learning opportunities for all.”

According to Maricel Fernandez, programme officer for Education UNESCO Office in Doha, UNESCO is working in close association with the Ministry of Education to develop a proposal for integration of inclusive education concepts within mainstream schools around Qatar. Efforts also are being made to ensure that teachers are equipped with the skills to provide support to children with special needs and that the social environment of schools is healthy for the emotional well-being of all students.

“Around 52 mainstream schools in Qatar are now ready to accept individuals with disabilities. Not only Qatari citizens, but children of migrant workers too,” said Fernandez.

Short-term goals of the campaign include holding activities such as film screenings, exhibitions and workshops. Long-terms goals, on the other hand, include the spread of awareness of the importance of offering inclusive education in Qatar. “The effort of leaving no one behind when it comes to education begins with the promotion of an inclusive educational system,” she added.

Phoenix Private School, located in Al Mamoura, is one school that offers inclusive education to individuals with learning disabilities. The school follows the British curriculum and “modifies educational requirements for students [with learning disabilities] at a level that they can access,” said Ayesha Ahmed, a special educational needs coordinator at PPS. Cognitive behavior therapies and one-on-one in-class support is also offered by shadow teachers at the school.

According to Ahmed, PPS has a student body of roughly 400, out of which 23 are children with special needs. “When I came to Qatar four years ago, PPS had just started their project of inclusion. Over the years, the number of schools that are inclusive has relatively increased,” she said.

Ahmed added inclusive education is highly important for the social growth of individuals with physical and learning disabilities. “The rest of the student body also benefits from inclusion by learning to be tolerant and aware of the needs of special needs individuals from a very young age,” she said.

Khansa Maria, blind since birth, is a sophomore at Georgetown University in Qatar, who was previously enrolled at an inclusive school in Pakistan. “This experience helped me see what it means to be equal to my peers, regardless of my disability,” she said.

Despite efforts to achieve inclusivity in education in Qatar, Tala Rifai, the mother of Celina Rifai, a 4-year-old affected by muscular dystrophy said, “my experience has been extremely disappointing, as international schools in Qatar continue to be hesitant of accepting children with special needs.”

Rifai said that based on her experience, local government-run schools seem more open to the idea of inclusivity in education. She added that she believes it is the responsibility of the Ministry of Education to ensure that international schools around Qatar are only allowed to operate if they are accessible and inclusive of individuals with special needs.

According to Fernandez, Qatar still has a lot to achieve in order to establish an inclusive education system in the country. However, she said she believes this is not only the job of the government, the Ministry of Education, or UNESCO.

“We encourage [the] community as a whole to be part of the process in order to affect change because it is not [only] effective if we have the tools or the facilities,” she said, adding, “What about the mindsets of the people?”