Sculptures of Fetal Development Cause Controversy 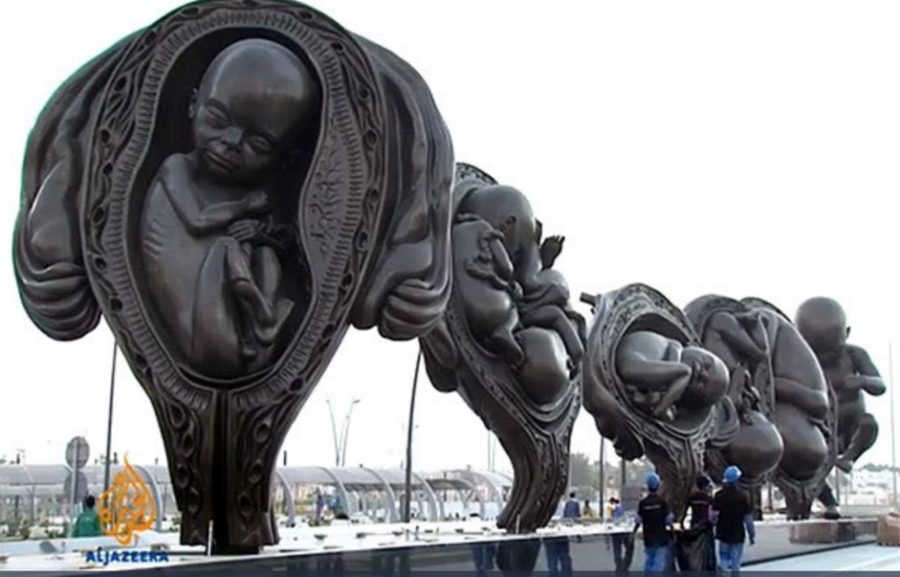 After five years hidden under sheets and covers, the 14 bronze Damien Hirst artistic sculptures located in front of the Sidra Medical and Research Center were unveiled again in early October. While the sculptures, titled “A Miraculous Journey,” aim to visualize the stages of fetal development, the recent unveiling has resulted in a backlash from many Qataris with some criticizing the sculptures as violating Islamic principles.

In 2013, Hirst’s artwork was showcased to the world for the first time. Shortly after the unveiling, the sculptures were put back under wraps. The Qatar Museums Authority said the covering was intended to “protect [the statues] while work is ongoing” in the surrounding area.

The colossal sculptures illustrate the 14 fetal stages from conception to birth, starting with an egg being fertilized and ending with a 46-foot-tall baby. Commissioned by Sheikha al Mayassa Hamad bin Khalifa al-Thani, the chairperson of the Qatar Museums Authority, the artworkcelebrates the journey a baby undergoes before birth.

Subsequent to the recent unveiling, Hirst’s work aroused mixed reactions on Twitter from locals, with some criticizing the statues as “disrespectful to the Islamic beliefs.” The critics of the sculptures started a hashtag on Twitter لا_للتماثيل_في_قطر#, which roughly translates to #No_sculptures_in_Qatar. Some users argued that statues in general imitate Western cultural practices and violate the religious traditions of Islam.

Translation: [#لا_للتماثيل_في_قطر The designs, also called models, are invading the Arabian Peninsula till it leads to the leniency of the establishment of temples in some Gulf states, which are reprehensible steps in Muslim countries, which demolished the valley and was deprived and returned from the marks of Judgement day like it was mentioned in the Sunna, and the Government must prevent it.]

Other users, however, disagreed, saying that Hirst’s statues are a “celebration of life through art”and expressed their appreciation for the effort to bring the creative art pieces into Qatar.

Translation: [Every time I look at the sculptures displayed outside @SidraMedicine, I ponder the magnificence of God’s creation in the formation of the fetus, Thank God for His grace and for His good creation and for the grace of reason and meditation. I pray to those who did not get pregnant or feel the kick of life in her womb for God to bless them. #لا_للتماثيل_في_قطر]

Some users also responded using the same hashtag to defend the artwork, arguing that critics are making “something out of nothing” and questioning how people could be disgusted from the way they were “brought to life.”

Translation: [They always say that childbirth is a miracle of life, and then they are now saying that it’s something disgusting. It’s funny how you are disgusted by the way you were brought to life.]

#لا_للتماثيل_في_قطر
Why are you all making something out of absolutely nothing?
These sculptures look tremendously beautiful. pic.twitter.com/VIE5LigZmi

Brannon Ingram, a religious studies professor at Northwestern University in Evanston, said that while there is a lack of a universal Islamic perspective on statues among Muslim societies, statuary as an art form in some contexts might remind some Muslims of idols, which is condemned in the Quran. However, statuary also should be understood differently in specific contexts. For example, erecting statues in a mosque would be “a clear contravention of the principle that worshippers should focus on God alone,” but statues in a town square or art museums might be viewed differently, he added.

“I can see how many Muslims could easily argue that the Damien Hirst sculptures are in no way comparable to the sort of statuary that could subvert the principle of God’s oneness or that God alone should be worshipped,” Ingram said. “On the other hand, I can imagine some might say this particular sculpture is problematic because it represents aspects of child-rearing that some pious Muslims regard as part of God’s control over every aspect of the universe. Is Hirst respecting or satirizing that process, they might ask.”

Alghalya Al-Qubaisi, a junior at Georgetown University in Qatar, agreed the statues remain controversial in Qatar because some people hold the view that figures and sculptures are prohibited in Islam.

“Since it is seen that the human cannot recreate what God created,” Al-Qubaisi said, “I guess it’s just an eyesore to the people who truly believe that religion is against sculpting the human body.”

However, in Sharia law, sculptures aren’t forbidden in this context since it serves a scientific purpose, said Sheikh Mahmoud Anani Nafee, an expert in Islamic studies with a doctorate degree from the Association of Muslim Scholars.

“The sculptures are for scientific and knowledge purposes, mainly describing the embryological process, and thus not prohibited by Sharia because they’re not presented in a public space but in a specialized place for scientific comprehension,” Sheikh Mahmoud Anani Nafee said.

According to a report by the New York Times, the Damien Hirst statues cost about $20 million to build and erect.

Hirst’s work celebrates life by depicting an “extraordinary” process that is “bigger than anything” in one’s life, according to the artist’s website. The sites also states that the meaning conveyed through the statues aligns with the values of the Sidra Medical and Research Center, since it is a tertiary hospital that specializes in healthcare for women and children.

“The statues are scientifically appropriate and they fit the purpose of Sidra because it’s about women and children as it shows the stages of embryology,” Dr. Monzer Sadek, division chief for the Adult Anesthesia Department at Sidra Medicine, told The Daily Q.

Echoing Hirst’s arguments, Sheikha Al Mayassa Hamad bin Khalifa Al-Thani said in an interview with The New York Times that the sculptures were not against Islam given that there’s a verse in the Quran that touches upon “the miracle of birth.”

Hirst’s art is not the first of its kind in Qatar. In fact, the Qatar Museum Authority has an entire section on their website dedicated to public art figures and sculptures in the country, in addition to a section for public art education.

The Daily Q has reached out to Sidra and QMA for comment. Updates will be posted once responses are provided.