A Reminder of What it’s like to be Human: My Experience Learning About the Grenfell Tower Fire 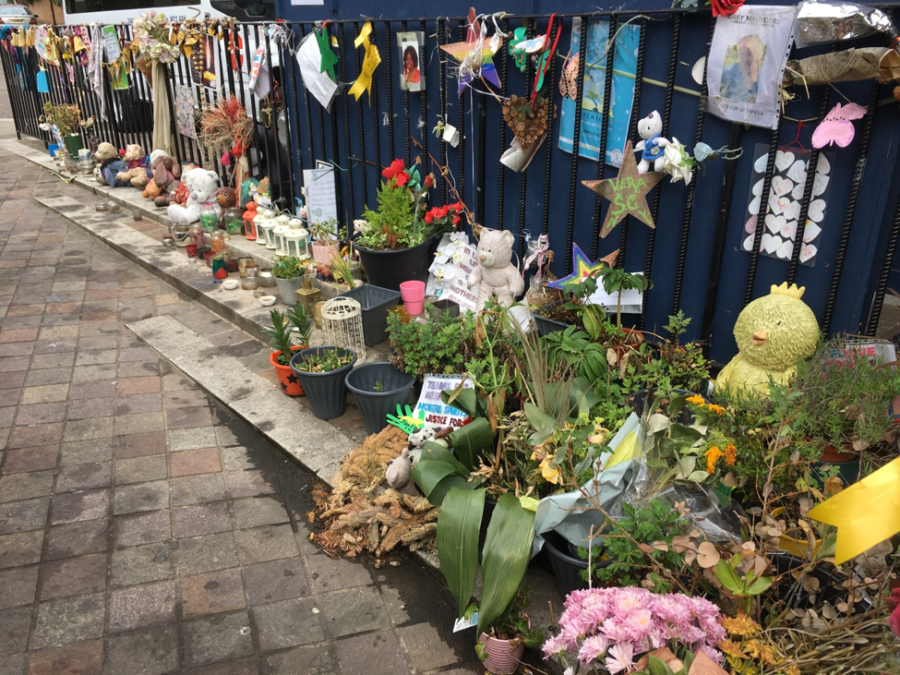 Flowers and mementos laid out in remembrance of those affected by the Grenfell fire. Provided by Asmahan Qarjouli.

While scrolling through my Twitter feed on a Ramadan night, I found an image of a burning building on my timeline. The picture seemed like an ordinary fire, so I scrolled past it until I eventually logged out.

The picture later spread on my Instagram explore page and, by that time, half of the said building was on fire. My curiosity then made me go back to Twitter, only to find #Grenfell as a top trend. I clicked on the hashtag and read prayers from Twitter users and updates from news organizations like The Guardian. That was the moment I realized that the Grenfell fire was more serious than I thought.

After many months passed, I forgot about the fire, but little did I know that this topic would become so important to me.

On June 14, 2017, a fire engulfed the 24-story building, killing 72 of its residents including a stillborn boy who died in the hospital after his parents escaped from the fire.  The building was categorized as council housing, where a large population of people with lower income lived. Following the fire, many were stuck between hope and fear during the search for their missing friends and relatives. The fire left people with so many questions and led to the displacement of the Grenfell Tower’s residents.

“I understood immediately how dangerous this fire could end up being and was transfixed by the story. I know the area quite well, as Grenfell is not far from a part of London where I used to live—I’ve passed the tower dozens of times,” said Andrew Mills, an assistant professor of journalism at Northwestern University in Qatar and the instructor of both summer courses.

These courses were different as you would not simply attend lectures, read the material, and write essays. Prior to my visit, I had to view footage of the fire and interviews that allowed me to connect the facts together in order to learn more about the issue.

The fire was more complex than I thought.

What I thought before traveling to London was that I would meet people from the media industry and learn about their various decision making approaches when covering developing issues. I also thought of the Grenfell fire as a regular discussion topic—I even wondered why my professors chose this topic. But the information I found struck me.

Only a few minutes before 1 a.m., the London Fire Brigade received phone calls about the fire. The initial source of the fire was a resident’s fridge on the fourth floor, which the firefighters tried to manage until flames got through the cracks of the tower’s flammable plastic cladding, causing it to spread upwards and burn the rest of the 24-storey building.

In 2016, thermal insulation companies installed plastic cladding to improve the tower’s appearance and provide insulation. The same cladding was made of plastic foam that instantly turns into combustible fuels. While the insulation companies were repeatedly warned about the dangers of the plastic, their reports continued to conceal the risks and the material was used because it was the cheapest option.

When the cladding caught the flames, it immediately spread at a fast rate and the entire building caught fire almost half an hour after the initial flame started. The fire continued after sunrise as the plastics’ fuels kept burning its surroundings.

When I paid closer attention to the cause of the fire and after watching the footage of victims and their families, I was enraged. The people had lost everything they ever owned and their lives changed in a matter of moments.

An entire community was affected. Neighbors were left only with their memories of the building’s residents, and school children in the area had to carry on without their classmates who died in the fire—all of which was preventable.

Like most people, I am no stranger to grief and the pain of losing a loved one, but I had the space to gradually process my losses. While this connected me to the issue on a personal level, the losses the victims experienced instantly put them in survival mode, and they had to immediately look for new housing and move on with their lives without the space and time to process the event.

All the people who lived in the tower had different lives and possessions that were gone in a split second.

This is all I kept thinking of as I viewed the footage, but actually visiting the Grenfell Tower activated deeper feelings within me.

As I stood in front of the tower and scanned every angle of it, I recalled all the footage I viewed. All I was able to think about were the voices of the people in the footage who were screaming for dear life and the little children feeling lost and eventually dying inside the building. I then looked at the memorial site in front of the tower, all the messages left by the victims’ loved ones, and all the names written over the white wall separating people from the destroyed building. There were too many names with stories, dreams, ambitions, and families who are mourning their deaths.

This was the moment where I felt a lump in my throat and could not see any of my surroundings. I kept thinking about it all day while concealing my feelings with a smile and nod as my professors talked.

Going to a parliamentary debate at Westminster Hall the following day of our visit, on May 14, brought back the emotions, and I spotted some of the victims’ families and the tower’s survivors. During the debate, several representatives of the Grenfell survivors called for more action in the investigation of the fire and advocated for adding more panel members to regain public trust.

“When I asked them [two survivors who have been re-housed] if they had lost everything they had owned in the fire that night, they said it was not about material possessions but that they had lost a community,” said Paula Sherriff, a member of parliament, at the debate.

What makes this such an important issue is that regular people had to pay the price because their only fault was that they could only afford to live in council housing. Now, they have to fight this daily battle of remembering the fire and building their new lives.

“Lives were lost that should never have been lost, and lives were also changed forever,” said Giles Watling, a member of parliament, at the debate.

What was particularly difficult about this issue is that it kept rapidly changing and it was ethically sensitive. Reporters had to interview victims and cover the issue while keeping in mind that they were talking to people who had lost everything they ever owned. The death toll was not immediately confirmed nor the names of the victims, which made the fire difficult to cover.

The Grenfell Fire was and remains a timely issue. It was never just a fire; it was an event that changed an entire community and left a painful mark in the lives of survivors and the victims’ families.

For this reason, I found myself following the news related to the fire and reactivating the same emotions all over again, even after our visit. The more I followed the issue, the more I felt closer to it while also feeling helpless for not being able to help the people affected.

But now as I express my thoughts on this topic, I keep discovering that journalism is ultimately a reminder of being human.