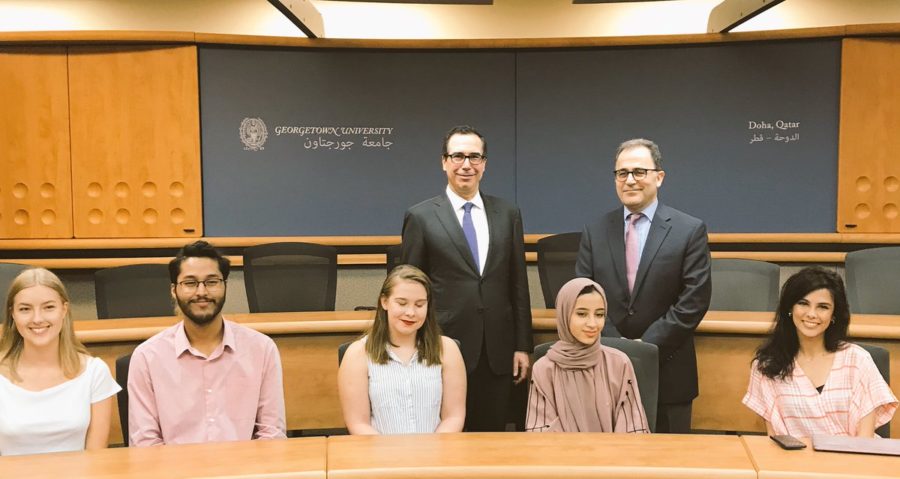 U.S. Treasury Secretary Steven Mnuchin visited Georgetown University in Qatar’s campus on Wednesday, Oct. 24, and met with Qatari and international students. His visit to Qatar was part of a six-country trip through the Middle East. However, some voiced concern over his visit amid the current uproar over the killing of Saudi journalist and Washington Post columnist Jamal Khashoggi in Saudi Arabia’s consulate in Istanbul on Oct. 2nd.

Enjoyed our tour with Secretary .@stevenmnuchin1 of .@GUQatar by Dean Ahmed Dallal. He met Qatari and international students are learning side-by-side at one of the best U.S. universities. https://t.co/EymXJZBMY5

“The secretary of treasury met with a few of us. We had a few minutes to shake hands with him and tell him about our courses at Georgetown,” said Malak Elmoh, an international politics sophomore at GU-Q.

Prior to his visit to Qatar, Mnuchin met with Mohammed bin Salman, Saudi Arabia’s crown prince on Monday Oct. 22, despite the current global outrage over the murder of Khashoggi.

However, Mnuchin defended his trip to meet with Saudi Crown Prince Mohammed Bin Salman as a sign of U.S. efforts to maintain ties with Saudi Arabia, the New York Times reported.

Enjoyed meeting with students and an informative tour of @GUQatar. pic.twitter.com/VW9t08g9gv

Some Education City students voiced their frustration over his visit, saying that as an “enabler” of the Trump administration, Mnuchin “had no place” at GU-Q.

Liberal universities will do anything in the name of “protecting freedom of expression of different perspectives” than *actually* protect freedom of expression. As an enabler of the violent Trump administration, Steven Mnuchin had no place in @GUQatar. https://t.co/i4vm2mCrzP

Justin Martin, an associate professor of journalism in residence at Northwestern University in Qatar, also tweeted his opinion regarding the visit, saying it’s a “bad call” for GU-Q to host Mnuchin after his public support for Mohammed bin Salman.

Universities host people with disagreeable views all the time. But Mnuchin is literally in the region right now to support and rub elbows with a man who murdered a journalist this month. Terrible optics for @GUQatar #KhashoggiMurder

One student also expressed concern over the fact that the university did not announce his visit in advance, which she said did not give students the time or opportunity to critically engage with Mnuchin.

Moreover, the entire student body wasn’t made aware of his presence and wasn’t given a platform to engage with him critically. For a visit so controversial and contentious, we should’ve had that opportunity.

“I just think we should’ve been told. Some students did meet with him, but it wasn’t like a public, whole student body being in the loop sort of thing,” said Ritica Ramesh, an international history senior at GU-Q.

Though it’s not unusual for Georgetown University in Qatar, a school of foreign service, to host officials from the Trump administration, the timing of the visit is what mostly raised concern.

“To have Mnuchin visit on the heels of Khashoggi’s assassination is [I think] highly insensitive,” said Martin.

In a statement to The Daily Q, GU-Q stated the following: “During the course of any given year, GU-Q hosts many dignitaries and visitors from across the world. When these visitors ask to speak at GU-Q, we ensure our community has an opportunity to engage. Secretary Mnuchin’s brief visit allowed time for a tour and private greeting.”