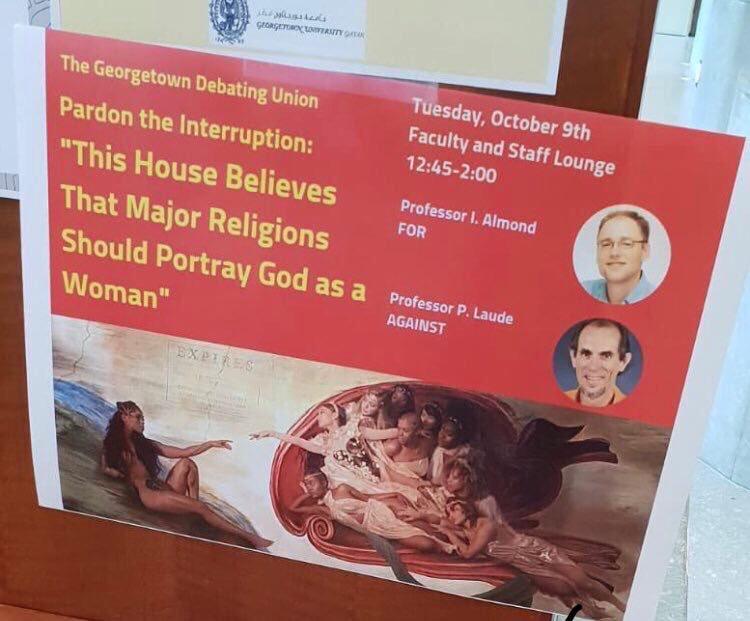 The flyer advertising the debate was posted around Georgetown University in Qatar and eventually on social media. Screenshot from Twitter.

Georgetown University in Qatar canceled a debate titled, “Major Religions Should Portray God as a Woman,” after a public backlash ensued when the debate was publicized on social media.

The debate, hosted by the Georgetown Debating Union, was scheduled for Tuesday, Oct. 9. It was set to feature Ian Almond, a professor of world literature, and Patrick Laude, a professor of religious studies, who were meant to argue for and against the motion respectively.

But the proposed debate ignited controversy and anger on Twitter as people argued whether holding the debate constituted freedom of speech or a violation of Islamic belief.

@GUQatar I feel sorry for what has been announced. It’s very mean and nasty and most importantly its not acceptable for us as a qatari people ,to cross the red line under the name of freedom and speaking about our god badly.#جورج_تاون_تتعدى_على_الذات_الإلهية

On Oct. 8., critics of the debate started an Arabic hashtag on Twitter #جورج_تاون_تتعدي_علي_الله that roughly translates to #Georgetown_Insults_God.

Following the public outcry, Georgetown canceled the event. A statement was released through the university’s official Twitter handle, which said the “event was not sanctioned by the University and did not follow the appropriate policies for activity approval.”

Since the event was not sanctioned by the University and did not follow the appropriate policies for activity approval, it has been cancelled. The appropriate academic bodies will review the matter and take appropriate action.

While critics supported the cancelation, other users argued that the debate should have been allowed to take place.

Some GU-Q students said they understood the reason for the cancelation, but some also said the university’s action undermined their right to free speech.

“They are impeding not only on our freedom of thought as individuals but also our ability to pursue a truly culturally diverse education, which I feel is largely the purpose of GU-Q,” said Yasmine Fade, a junior at the university.

Shortly after the debate was canceled, students reported that GU-Q staff removed the debate flyers in the university, which had been uploaded on Twitter earlier and had sparked the initial backlash.

“I saw guards running around and taking off posters for the debate,” said Ibrahim Tariq, a junior at GU-Q.

The debate caught the attention of Twitter users in Saudi Arabia, which is currently involved in a diplomatic blockade against Qatar. One user claimed the debate was Qatar’s divine “punishment” for “opposing Saudi.”

Translation: “This is your punishment from Allah for opposing Saudi while supporting those who insult the prophet’s companions, attack the prophet’s honor, and send rockets to Mecca. You finally got someone to drill you. SubhanAllah”

But other users shot back at such criticism while advocating for further intellectual freedom in Qatar.

Let the neighboring dogs bark they won’t get there in another 2000 years probably. You can resist freedom but it eventually takes over because its only right to not hold people prisoners to their own thoughts. Disagree with him? Then debate him.#جورج_تاون_تتعدى_على_الذات_الإلهية

GU-Q released a statement regarding the cancelled debate to The Daily Q in an email. They reiterated that the debate organizers did not follow the “appropriate approval processes” and added that it  “created a risk to safety and security of our community,” thus warranting the cancellation of the event, according to the GU-Q Office of Communications. Read the full statement below:

“Georgetown is a global research university guided by a commitment to engage all over the world to promote the common good. A recently planned installment of the Pardon the Interruption student debate series at Georgetown University-Qatar (GU-Q) was cancelled after it failed to follow the appropriate approval processes and created a risk to safety and security of our community. GU-Q is committed to the free and open exchange of ideas, while encouraging civil dialogue that respects the laws of Qatar,” according to the GU-Q Office of Communications.