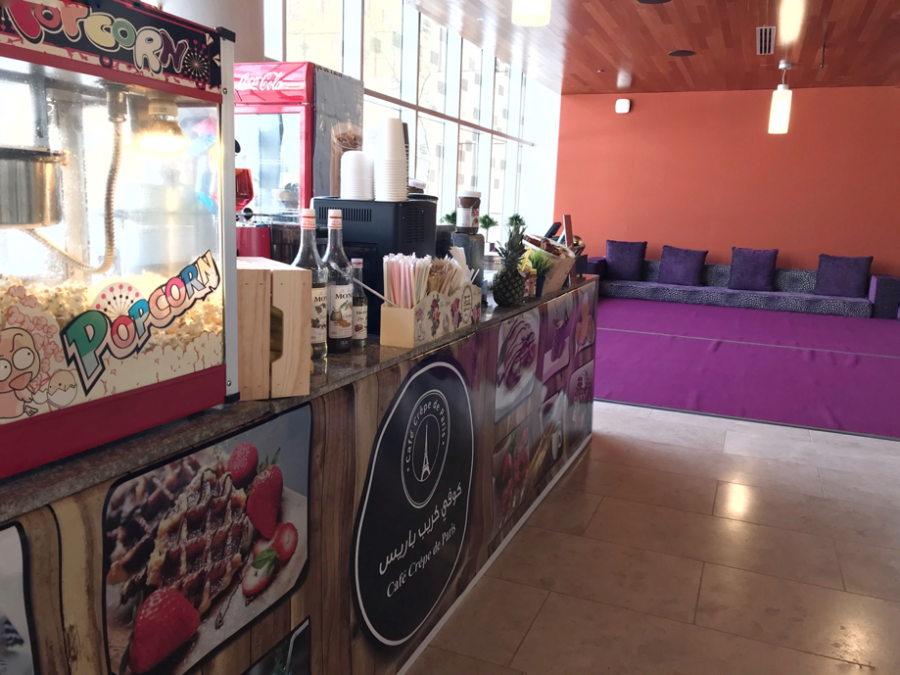 The smell of freshly made crepes harmonized with the warm Nutella and strawberries and spread all over the dining hall, leaving the space full of mouthwatering dishes to entice whoever passed by.

During the second week of classes, Café Crepe de Paris set up their stall at NU-Q from Sept. 11-13, 2018.This was part of a new initiative by Northwestern University in Qatar to provide its community with new dining options since the beginning of the fall semester, due to the lack of a cafeteria in its building.

“We only recently became aware that this was an option. And, while it has to be done in cooperation and approval from Qatar Foundation, as soon as we learned of the option we began to plan for this addition,” said Barry Sexton, director of business and finance at NU-Q.

Qatar Foundation is experimenting with campuses that seem to have good demand for diverse food options, according to Yousef Farajallah, commercial coordinator at QF. “We will soon send out surveys to EC community in order for us to learn more about their preferences, as well as to bring reliable pop-ups,” he said. “After that, we will have a clear plan with a list of different restaurants to operate on a weekly basis in these campuses,” he added.

According to Farajallah, having the same food daily gets very boring for staff and for students. It also takes a considerable amount of time and energy to go outside EC to grab a meal. These problems led to the introduction of pop-up restaurants and cafes around EC.

“We are planning to have up to 20 different food trucks all around education city starting from October until April 2019,” Farajallah said. Each vendor will offer a specific type of cuisine and food concept, such as Indian, Italian and American food, among other options.

A study conducted by QF showed that the most demand for pop-ups is concentrated on Mondays, Tuesdays, and Wednesdays. “For that reason, it is not fair to charge these restaurants 300 Qatari Riyals a day and encourage them to operate on Sundays and Thursdays without making a revenue for themselves,” Farajallah emphasized.

Even though pop-ups provide EC community with diverse food options, purchasing food still remains inconvenient. According to Farajallah, having a POS terminal (the electronic device used to process card payments) costs restaurants money since they need to pay for insurance. Because of this, some of the pop-ups might choose not to offer an electronic payment option for its customers. “However, we advise them all to have such devices for more convenience,” he said.

Despite the POS terminal issue, NU-Q has recently started hosting pop-ups in its building.  For three days starting from Sept. 4, 2018, Biryani Express operated and served its food at NU-Q’s dining hall. Their menu consisted of a variety of Indian food.

“So far, we have seen a number of people participate and purchase food from the first two pop-up restaurants. So far, the feedback has been very positive,” said Sexton.

Ali Al-Thani, a journalism junior at NU-Q, said that having pop-up restaurants is a good move since the café in the building is not convenient because it has to be shared by NU-Q’s community, which consists of more than 300 people.

“It is a great idea to provide students with a variety of options. However, the first pop-up restaurant was a bit disappointing because the food was not good quality, and the second one was overpriced,” said Abdelrahman Abouzid, a journalism senior at NU-Q. “I believe that it is a great step because it shows how NU-Q takes good care of its students,” he added.

“I think that they [pop-ups] are really exciting. I know that it is been a desire of the students for a really long time and that faculty and staff are also really excited to have new options of foods to eat in NU-Q,” said Keelie Sorel, the director of Student Affairs at NU-Q.

Fathima Feroz, a communication sophomore at NU-Q, thinks that the pop-up restaurants have good service, but she said the timings of operation should be extended until at least 4:00 p.m. “Most of the students have breakfast at their homes because they are either in a rush or have late morning classes, so the restaurants should start a bit late and run until 4:00 p.m. at least,” she said.

Education City is doing a great job in connecting students together even though we have different campuses, and it is even greater to do that through food, said Sawsan Shukri, an electrical and computer engineering senior at Texas A&M University in Qatar. “I hope NU-Q opens this opportunity to Qatari food projects in order to support local products to get more exposure,” she added

“I was glad to hear about the new food options at NU-Q, however, I think the university should bring more convenient options to its students in terms of prices. Not all students in EC have the ability to afford eating from such restaurants on a daily basis,” said Ramez Bodair, a medical student at Weill Cornell Medical College in Qatar.

Khalid Abdulla, a communication senior at NU-Q, said the university should send regular announcements via text in order to promote the pop-ups better. “Receiving weekly text messages about the new dining options is more convenient since emails can be easily missed,” he said.

“NU-Q is trying to work on this with QF and therefore, there is no final schedule ready yet; however, pending final confirmation, we hope to have California Tortilla for two days this week,” Sexton said. “It is just administrative difficulties getting things confirmed. It is a new process that we must work with and try to get things worked out,” he added.

QF is always happy to receive recommendations of restaurants from the EC community, especially from students, according to Faedah Egab, commercial manager of the community development president office at Qatar Foundation. Staff and students can email any suggestions to [email protected]