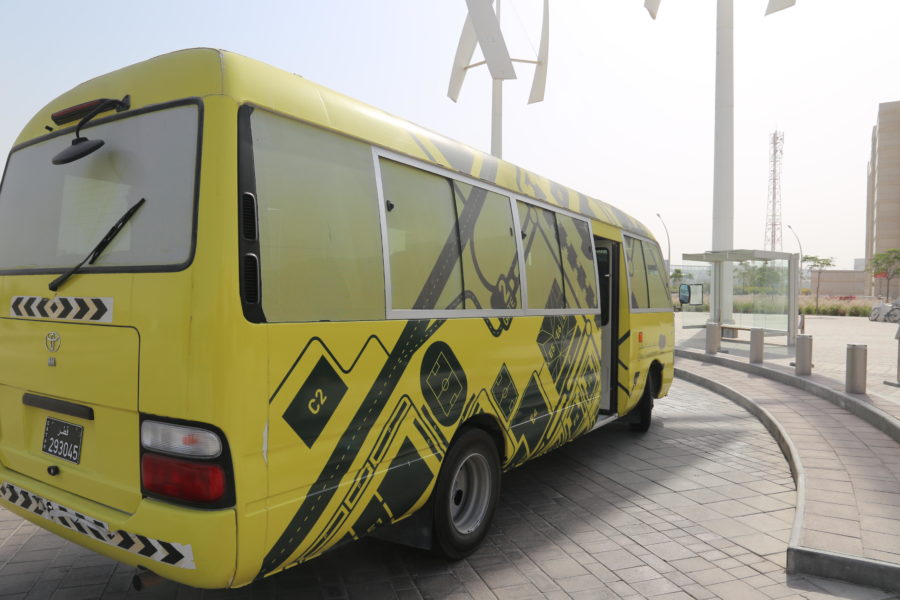 Students in Education City have raised concerns over the unreliability of intercampus shuttle buses after a new evening transportation schedule was implemented on Dec. 1, 2017.

The revised schedule has made significant changes to the evening route of the buses. The on-call shuttles after 6 p.m. have been replaced with a single bus that comes to each location every hour till 9.30 p.m. After 10.00 p.m. a white Toyota minivan picks up students when it is called.

The bus service follows an alternate route during this time that includes the Recreation Center and excludes Northwestern University in Qatar and the HBKU Student Center, according to the schedule provided by Qatar Foundation.

Complaint 1: The new evening schedule is inconvenient
According to an online survey of 90 Education City students conducted by The Daily Q, 67 percent of respondents said they were not satisfied with the new route for the evening bus schedule.

“It’s really inefficient because I can’t wait for a whole hour to catch the shuttle,” said Maha Essid, a sophomore at NU-Q.

Her sentiments were shared by other students who said the current schedule has created too long of intervals in between shuttles. Students must often resort to either waiting or walking, thereby wasting their time.

“I want to be able to work wherever and whenever. This system is no improvement and I want the old one back,” she said.

Lubino Soares, senior transport manager at QF, said that the transportation changes were due to the lack of utilization of the buses and budget cuts. Utilization was surveyed via “sheet count on a daily basis.” Sheet counts are written reports submitted by drivers to QF Transport that track who uses the shuttles, at what time and their destination.

Soares said they had 12 buses in the past. However, QF has cut the department’s budget to the point that they can only operate four buses.

He added that the changes to the evening schedule were made in accordance with the wishes of the Hamad Bin Khalifa University management and a university focal team, which is made up of staff representatives from all universities that deal with QF directly.

“We can make changes to this but it has to come from the universities,” Soares said. “It is neither possible for us to directly entertain the ideas and requests of 1,700 students nor are we allowed to by QF.” He said that the focal team should meet more often and bring student concerns to the transport department regularly.

A bus driver who also requested anonymity said the bus goes around EC for 30 minutes at the start of every hour. After that, it stops at the QF transportation office and is inactive for the remaining half-hour. For example, a bus is active from 6 to 6:30 p.m. and then is inactive till 7 p.m.

Keelie Sorel, interim director of student affairs at NU-Q, confirmed Soares’ statement that a university focal team was part of the decision-making process that led to the creation of the new bus route.

She said she was aware of students’ frustration over the previous bus schedule but not the new one, because no students have complained to her. She said she was also not aware of the fact that NU-Q is not officially listed on the bus route and expressed surprise.

She added the solution for the current evening bus schedule was first discussed and proposed by an EC-wide student council known as the Student Government Association. It consists of presidents of the student unions at all EC universities.

Mowad Abulgasem Alaradi, president of Texas A&M University at Qatar’s Student Government Association, also confirmed Soares’ statement. He said his team reached out to members of TAMUQ’s student body in regards to the system and then proposed a solution to the EC-wide SGA, which was to replace the on-call shuttles with hourly shuttles.

Complaint 2: The evening bus schedule is worse for female dorm residents
Riders say the evening bus system is worse for female students who wish to use the bus after 6 p.m. from their dorm. Some students say the bus drivers refuse to take students from the female dorms to anywhere in EC except the Recreation Center. On the other hand, the bus travels from the male dorm to most other bus stops.

Manahil Mirza, a sophomore at Virginia Commonwealth University School of the Arts in Qatar, said going anywhere from the female dorm is almost impossible in the evening.

“I don’t take the shuttle after 6 p.m. because it’s very inconvenient, and they [bus drivers] always refuse to take you from Shamali [the female residence hall] to any other place than the Recreation Center,” she said.

A shuttle driver who requested anonymity to protect his job confirmed that after 6.00 p.m., no buses went directly from Shamali to other bus stops in EC, except the Recreational Center. He added that this is per QF Transport instructions.

Complaint 3: Shuttle buses rarely come upon students’ requests and the hotline operator can be unreliable
“You call the shuttle and he will tell you that he’s coming in five minutes. Twenty minutes later you realize you’ve been lied to and start walking,” said Yahya Salim, a freshman at NU-Q, referring to the on-call white minivans.

Some students say they also are frustrated by the attitude of the transportation hotline operators.

“At times, especially late at night, they just don’t pick up. I’ve had to call eight to 10 times before anyone picked up,” said Danish Rehman, a senior at TAMUQ.

Imad Iqbal, a community development assistant at the Janoubi male residence halls in Education City, said “they take their time to answer on the hotline and usually the person on the other end is not very happy to pick up the phone.”

Mirza concurred, saying that while in a Toyota Van she has seen drivers purposely not pick up the hotline.

Their experiences correspond with The Daily Q survey, which found that only 34 percent of students gave the hotline operators a score higher than three out of five stars, for being “courteous, helpful and understandable.”

The survey also found that 83 percent of respondents said they had to walk to their destination at some point because “the hotline did not answer or no bus or shuttle ever came.” Many students say they find walking to be quicker than waiting for the shuttle.

Since last year in the summer, “I stopped taking the bus entirely. I always walk whether be it to Janoubi or CMU,” said Maimoon Siddiqui, a sophomore at Carnegie Mellon University in Qatar. Walking from the female dorm to the male dorm can take up to 20 minutes.

“I call them, I wait, and then I say ‘khalas, I need to go.’ So, I walk to Shamali every single day. So, I basically cross all of EC,” Essid said.

Another bus driver explained why the on-call buses and minivans often do not come to locations upon students’ requests, particularly during the weekends and after 6 p.m. on weekdays.

“Sometimes students call during a shift change. Sometimes a single shuttle is just overwhelmed by calls,” he said.

Another explained why the shuttle service is especially slow during weekends. “There is only one bus on duty. So, a single driver caters to both Shamali and Janoubi. One bus does the work of four. We don’t even have time to go the restroom,” he said.

Soares acknowledged that it is true that some bus drivers, especially the Shamali bus drivers, may struggle to find break time. However, “the drivers have an hour-long break,” he said.

He added that as employers, they take every single step to create good working conditions for the drivers, such as good housing, clean uniforms, and timely pay and leave. “The long hours are stressful,” said Amir Muhammad, a transport coordinator at QF Transport, “but [hiring] more drivers would be harder to manage and would cost more.”

Regarding the claim that hotlines are left unanswered or the operators are rude, Soares said, “this is not accepted by us and I will certainly explore this matter for corrective action.”

However, he added that transport coordinators have also complained about “rude or abusive calls and demands” from students, including a student who used “very bad words [towards a hotline operator] and switched off” his cellphone.

“We’ve had to deal with unimaginable rudeness from the students,” Muhammad said. “I’ve been yelled and sworn at when I’m just trying to help these students.”

“I have numbers from students that called from GU and CMU who treated an operator very poorly.” He banned both numbers from the transportation services.

Muhammad also described how six months ago, one of the QF buses had been hit by stones thrown by students. A similar incident had also occurred two years prior. On another occasion, some students had slapped a bus driver through the window.

“Incidents like these lower morale and make our jobs harder,” he said.

Complaint 4: The evening bus route officially excludes the NU-Q building
The evening bus service after 6 p.m. excludes NU-Q and the HBKU Student Center, according to the schedule provided by Qatar Foundation.

“I’ve asked the buses to drop me to NU in the evening and they always tell me they don’t go there,” said Fatima Hassan, a senior at NU-Q.

Soares said the evening schedule did not include NU-Q due to a clerical error but the bus physically still goes to NU-Q from Janoubi, as demonstrated by sheet counts. He said that no one from NU-Q had reached out to him to correct the issue. The bus does not go from the female dorm Shamali to NU-Q, however.

Positive experiences on QF Transport and the GU-Q shuttle
In contrast, some students say they are satisfied with the new schedule.

Enxhi Avdullaj, a freshman at VCUarts Qatar, said, “The weather is good and it’s doable to just walk and get to university.”

Similarly, HBKU College of Islamic Studies student Aliyu Tukur said he has no problems with QF transport but added that he rarely stayed late at night at university.

Some students from Georgetown University in Qatar said that they barely ever used QF transport services after 6 p.m. because Georgetown’s shuttle service arrived faster.

“Our shuttle is just more flexible with the locations than QF’s buses. It even goes to gate three when we need anything from the stores there,” said Ibrahim Tariq, a sophomore at GU-Q.

Nouf Al-Sulaiti, president of NU-Q’s Student Union, said she is aware of the complaints surrounding the new bus service and working on deploying measures similar to GU-Q for NU-Q.

“This is a genuine issue that stresses those of us who live at the dorms every single day,” said Essid.