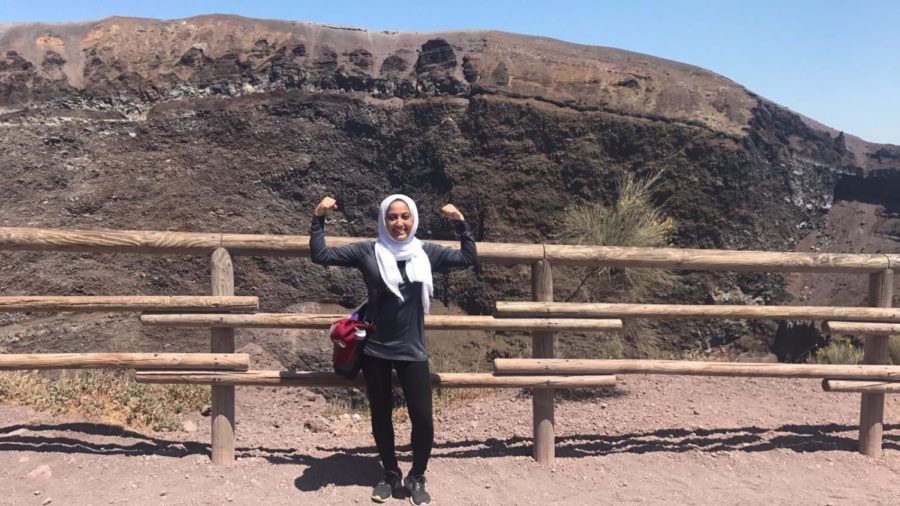 In a battle of wits, Habibah Abass is the last person you would want to be up against. Sharp, discerning, and poetically blunt, Abass is an expert at breaking down an argument and leaving it in shambles.

Despite being a natural wordsmith, it is surprising that journalism was not Abass’ first choice of study. Raised in Brooklyn, the 21 year old first envisioned herself studying psychology at New York University, but after her family permanently moved to Doha, she chose to pursue her education here due to their wishes.

However, her transition did not go as smooth as she hoped. When Abass first arrived in Qatar, she could not imagine staying in the country for too long. A self-acknowledged stubborn teenager, Abass was upset at having to move to a new country. “We moved at a time when I was 14, which is a difficult time for any teenager. So I gave my parents a hard time about it. I wasn’t asked for my opinion I was just told that ‘khalaas, we’re moving to Qatar’ and that’s what I took issue with.”

To her surprise, she found herself surrounded by rich diversity in Doha. “When I was in Brooklyn, all my friends and all the people I knew were Arab and they were Muslim. I was only exposed to different people and different cultures when I moved here,” she said. According to her, this level of exposure helped Abass realize the significant value of free speech. It also made her question many of her assumptions, fostered previously by what she deems as her “cultural bubble.”

When applying to colleges, Abass said she realized Northwestern University in Qatar aligned with her values. Her passion for advocating for greater minority representation was affirmed by a speech Mary Dedinsky, the director of NU-Q’s journalism and strategic communication program, gave at an admissions workshop.

“All I’ve ever wanted to do was to give back to my community and do something meaningful with my life,” said Abass, adding, “she made journalism sound like it was something meaningful, giving ‘a voice to the voiceless’ and giving power to the people.”

The drive to advocate for the rights of marginalized groups has largely shaped Abass’ ambitions.

Now a senior, Abass wishes to channel her experiences at university into working for a non-profit organization or as a teacher. Abass’ previous involvement in a Global Engagement Studies Institute trip to Kenya helped mold her perceptions of civic engagement and social justice. GESI is a Northwestern University program which provides global service learning opportunities for students. It focuses primarily on community-driven change in association with local grassroots organizations. Preparation for trips involves educational courses and vigorous training. Abass said it introduced her to subjects which challenged her everyday thinking and enhanced her understanding of what responsible and culturally sensitive outreach should ideally look like.

“Terms like internalized oppression or white privilege. I knew those things existed but I just didn’t know what terms to attach to those situations and learning all those things felt very empowering for me,” she said.

Initially, Abass found her trip to be quite daunting. Slightly introverted in group settings, it took some time for her to find her footing with her host family. “It takes me a while to get used to people, but once I had a routine and I was going to my NGO every day, it was a lot of fun,” she said.

In retrospect, Abass views the trip as a highly significant turning point in her life. “It was just one of those things that you don’t know in the moment how much it’s going to impact your life, and later on when you look back, you’re like, ‘yeah, that was a defining moment.’”  She added that not only did this help her achieve a greater understanding of Kenyan culture and its similarities to Arab culture, but working full time at an NGO enabled her to her learn about the intricacies of volunteer work while reinforcing in her the importance of empathy and compassion.

Another thought-provoking and formative experience for Abass was an anthropology course on gender taught by Professor Sami Hermez. “It problematized terms and issues that I kind of just took for granted. Like what is gender? What is male? What is female? What is masculinity?” said Abass.

Abass’ interest in the complexities of gender politics has enabled her to challenge reductive ideas on how women should conduct themselves. “Everyone that you meet will have an opinion on what women should do, what women should think, what women should wear, how women should live,” said Abass. As a supporter of the intersectional feminist movement, which examines how multiple identities of gender, race, class, and culture influence social inequalities, Abass applies its tenets to her own cultural background as an Arab-Muslim woman. “I think what’s liberating for me about intersectional feminism is that it’s not about what any other person says I should do or how I should feel or dress. I have the agency to live my life. That’s it, and all other women should have that agency. I don’t get what’s so difficult about that.”

As a graduating senior, Abass has no regrets in terms of how her university experience has gone so far. “If I were to go back, I would do the same exact thing all over again,” she said. “I mean, there were bad times obviously, but I learned a lot from those bad times. I think that’s the whole point of going to university. It can’t all be rainbows and sunshine. You learn from your mistakes.”

Her advice to lowerclassmen is to take the initiative and make use of the ample array of opportunities offered by NU-Q. “My biggest advice would be that don’t take your education for granted. Fight for your education because so many people in this world would kill to have opportunities that we have,” she said.