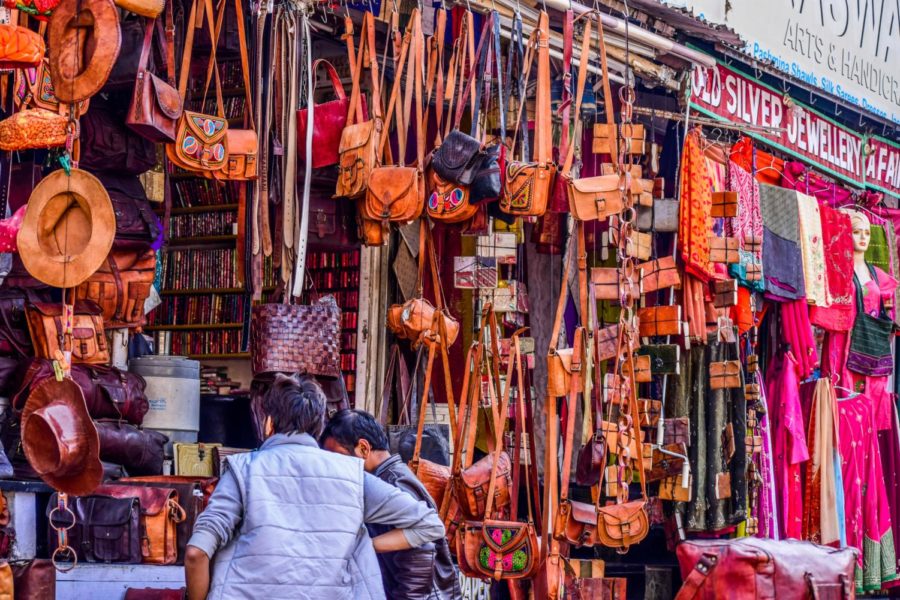 As the man in the shop laid out sari after sari in the hope that my friend would buy one, I ran my fingers over the golden threads that intricately adorned the navy blue one that had caught my eye. “How do you like this one?” I asked, getting up and carefully draping it over my shoulder. “Too ethnic. I can never wear this back home,” she said to me. I narrowed my eyes, revealing the confusion in my head. Almost as if she had read my mind, my American friend replied with two words – a phrase that I had read about and heard of, but hadn’t given too much thought to: cultural appropriation.

Over the summer of 2017, I was a part of a study abroad program called GESI, a service learning and community development program. Being of Indian descent but having grown up in Qatar, I picked India as my location of choice. It was a chance to understand a place that was supposed to be home but that I was a stranger to. A chance to see the country, not from the eyes of a tourist, but to be able to see the hardships of my people and maybe, in my own little way, ameliorate parts of them. Ten other students went with me, a very diverse group of students with multi-ethnic backgrounds.

Nearing the end of the GESI trip, I finally had it with all the cultural appropriation I saw going on around me. I finally spoke up when one of my friends bought a rosary of the Rudraksh, seeds used for prayer in Hinduism. I tried my best to ignore it, but seeing the rosary around her neck, used as an accessory rather than a form of prayer, finally ticked me off. In my own way, I explained to her why I thought her actions were cultural appropriation. Thankfully, not only did she understand where I was coming from, but she said she now finally understood the cultural context of rosary. She immediately walked into the temple and proceeded to “present” the rosary to the idol of Lord Shiva. I’m still not sure what to make of her gesture: was this a moment of reverence or a reaction out of guilt? What I do know is that she did not try to justify or defend herself, but instead rectified her mistake and even that little step means a lot.

Another memory that comes to mind is when our project supervisor said it was required that everyone wear Indian clothing during their time at work and, in general, during most times of trip in order to not attract unwanted attention. I heard complaints from fellow students about how this was a waste of money or that they would never be able to wear the clothes again – sentiments that I understood. After all, many of students, who were not Indian themselves, would be accused of cultural appropriation if they wore such clothing in America. What ticked me off, however, was the potential solution some of the students came up with during their conversations: “Maybe we can cut it up and use it as a beach cover-up.” I was horrified. The idea that signifiers of my culture would be defiled instigated feelings of anger and ultimately disappointment in me.

These kinds of incidents have framed my idea of cultural appropriation. Initially, during the trip, I was entranced by the idea of showing off my country and peddling its traditions like they were mine to give away. “This kurti would look great on you!” “That bindi really brings out the green in your eyes.” But even when I said these words, I knew something was wrong, even though that up to this point, I had never really reflected on my unease in depth.

Born and raised in Qatar, I am what they call a third-culture kid. Having lived in a society rooted in diversity with multiculturalism at its core, the lines of cultural appreciation and cultural appropriation were blurred to me. Americans call their country a melting pot. Little do they know about Qatar and its diversity. Everyone here is different and yet, no one seems quite that different.

Growing up, everyone around me, myself included, was enchanted with Western entertainment media. Having idolized Hollywood women for most of my formative years, when a nod came in my direction in the form of the Spice Girls donning saris, or if I saw a paisley print on the runway by fashion designer John Galliano, I didn’t deem it cultural appropriation. I was elated that they were celebrating my culture, an idea I am now disillusioned by.

I’ve already used the phrase cultural appropriation quite a few times in this article. But most people only have a vague and generalized idea of what the word means. So, it’s important to clarify, what conditions need to be satisfied for us to label something appropriation? To me, it means using symbols of a culture not your own, without knowing or understanding, or bothering to know or understand, the meaning behind them. It occurs when a representation of a culture is taken out of its original context. If you do not have enough information to appreciate a culture, you’re probably misappropriating it.

Cultural appropriation, as a concept, has developed a bad reputation. The word is used to describe every moment of cultural exchange, whether or not appropriation has occurred. When I first came across the word, I did a quick google search. The results threw me off a bit, from anger towards actors and fashion designers appropriating Native American culture to accusations against Ivanka Trump of appropriation just because she wore a paisley dress that was not made by an Indian designer on her visit to India. It’s the casual use of the word by some people that dilutes the hundreds of years of colonial imperialism behind cultural appropriation and takes away from the true gravity of the situation, making a mockery out of an issue that dehumanizes some people and their cultures while allowing others to take advantage of it. Take practicing Yoga for example. The health benefits of Yoga, as everyone knows, are immense. But do those who practice it know about the history of Yoga? Or that it was banned while the British ruled India because it was seen as a sign of Indian rebellion and savagery? If they do not, those who practice Yoga without giving it the respect it deserves are participating in cultural appropriation. Colonizers often tried to destroy or crack down on certain cultural practices because they were symbols of struggles for independence. And those who now blindly use these symbols without understanding their significance only further enforce Orientalist views.

Notwithstanding the careless use of the term, cultural appropriation is a problematic issue which requires a more nuanced understanding of history, culture, and people. It has been around for centuries; however, it has only recently been given a name. There exists a fine line between what is considered appropriation and what is not. Many dismiss appropriation, ridiculing “culture cops,” rebutting them with the notions of cultural exchange and assimilation. What they seem to forget is that cultural exchange takes place on an even playing field, without hundreds of years of history that have trivialized a community’s oppression and history.

In India during the GESI trip, appropriation took many forms. I watched my fellow colleagues wear Bindis (often worn by Hindu women to signify femininity and womanhood), while they didn’t seem to shy away calling these women “regressive and oppressed.” During our weekly discussions on what we were learning, no one seemed to address the elephant in the room: how everyone casually used the signifiers of the culture while simultaneously berating it for being “backward.”

Don’t get me wrong, not all efforts towards cultural exchange or assimilation are wrong or should be considered appropriation. When you find yourself in a different culture, you will, by default, try to incorporate it into your life and that’s not wrong, as long as you make an effort to understand the meaning and significance of it. When I was 13, I took some non-Indian friends to a cultural festival called Navratri. Decked in the Indian clothes I offered them, we danced all night long. In my mind, this was not appropriation.

And yes, I took home souvenirs from the GESI trip too. Little pieces of India that I would keep or gift to my friends and family, pretending they were sole representations of the ocean of cultures that is India. But was I, by means of the definition, cultural appropriating? I don’t have an answer to this. India is one of the most culturally diverse countries in the world. Identities abound. If you’re a part of a country as varied and enriched as India, with 29 states and each state possessing a history, language, religion, and subculture of its own, is it still possible to appropriate your “own” culture?

This is a question I’m still struggling with, as a student and as a traveler. I try to check my privilege and not to appropriate other cultures; I instead try to appreciate and absorb as much of the stories and histories of a country as possible. It is important not to see cultures as stereotypes or costumes. As for appropriation of one’s own culture, I distance myself from fetishizing symbols of my culture or trying to use them to feel exotic. Instead, I take the time to learn more about my own history and identity and feel closer to it. It’s a step that I recommend everyone take.