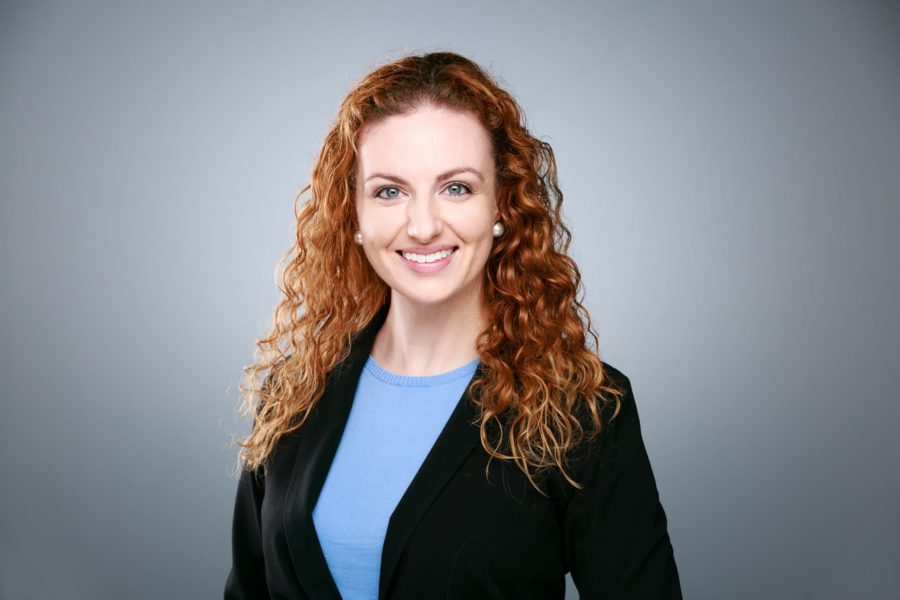 Photo by Northwestern University in Qatar

Pamela Krayenbuhl was three years old when she went to her first ballet class, complete with a pink tutu and ballerina pointe shoes. She hasn’t stopped dancing since. Today, at 29 years old, Krayenbuhl still looks the part of a ballerina, with her hair neatly tied up in a bun, and her fingers perform their very own dance as she describes the intricate details of her craft.

Now an assistant professor of communication at Northwestern University in Qatar, Krayenbuhl’s love for dance sparked her interest in moving images, specifically film. Before coming to Doha, Krayenbuhl earned her doctorate in screen cultures from Northwestern University’s School of Communication in Evanston, Illinois, where she was able to intersect her two passions by studying dance in films.

“Dance and films have a concurrent originality. They have intersected throughout history and have shaped each other,” said Krayenbuhl, who completed her Ph.D. program in 2017. “Because of my [dance] training, I think like a dancer and I view [media] like a dancer.”

Krayenbuhl approaches her work with creativity and experimentation. Before studying screen cultures at NU-E, she studied rhetoric and interdisciplinary studies as an undergraduate at the University of California, Berkeley. While she was a student, she co-founded a ballet company called Ballet Company at Berkeley in 2009. Instead of dancing methodically to classical music, which is the norm, Krayenbuhl incorporated pop songs and embraced interpretive dance. Her aim was to “make ballet cool again” and modernize it.

When she left her home state of California and moved to Illinois for her post-graduate studies, however, Krayenbuhl found herself lacking a performance outlet. “Some people need to run when they are stressed,” she said. “I need to dance.”

Soon enough, Krayenbuhl met Erica Reid, a choreographer who shared her interest in finding a creative dance outlet. “We wanted to form a no-pressure place for [people] with dance backgrounds to create new pieces that we could perform without the rigid structure of a company,” Reid said. “Meeting Pam was the spark that set this larger experience in motion.”

This encounter between Reid and Krayenbuhl led them to establish the Modet Dance Collective, a group of part-time dancers who were free to experiment and perform whatever they wished, in 2013. According to Krayenbuhl, the group’s goal was to create a “stress-free space for dancers to choreograph and practice their dance forms.” They thought of themselves as “dancers with day jobs.” Krayenbuhl danced with the collective in the evenings and on weekends.

During the week, Krayenbuhl would spend her time watching films about dance. Her dissertation explored the intersection of dance cultures with commercial film and television cultures. One of her case studies involved studying a film starring Gene Kelly, a famous male dancer and movie star known for his combination of tap dancing and ballet. “Seeing the way he was using ballet, which I’m most familiar with…I understood it on a visceral level,” Krayenbuhl said. She described her response to his film as “corporeal,” because she instinctively felt his dance movements, instead of purely analyzing them intellectually. “My immediate connection to a lot of these media texts is physical than intellectual.”

The class curriculum combines her love for film and dance, as it compares song and dance sequences and how they function within films. “I really like the concept of the class. It is a very interesting subject [to] explore,” said Ibtisaam Moosa, a senior who takes Krayenbuhl’s class. “Professor Krayenbuhl also dances in class to illustrate dance steps. It’s very entertaining.”

Krayenbuhl said she is excited about her time at NU-Q and is passionate about teaching a wide variety of students. Despite her busy schedule as a professor and an academic, Krayenbuhl tries to continue dancing every now and then. Her current project is a global digital dance show, which involves members of the Modet Dance Collective, who are now located in different parts of the world, to create dance videos under a common theme.

“I don’t think I would do it differently if I could do [my dance career] again,” Krayenbuhl said. She added that dance has had a positive impact on her physical and mental health and has shaped the way she sees things, which she described as “valuable.”