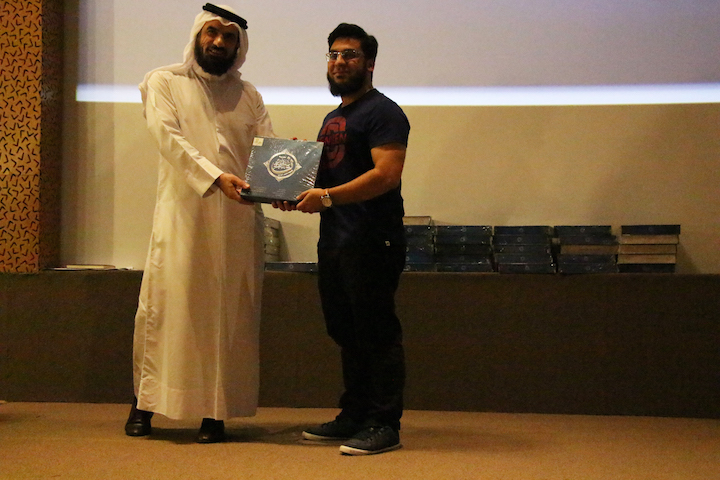 Forty-five winners were announced during the award ceremony of ‘Read and Rise,’ Education City’s fourth annual Quran challenge, which concluded on Thursday.

This year, 38 male and 62 female participants took up the challenge to learn Quranic verses of their choice in order to recite them to the organizers in private, strengthening their connection to Islam through the Quran. Students, janitors and security guards from all over Education City were among those congratulated on March 30 in a ceremony at HBKU’s Student Center cinema.

The competition took place from Jan. 21 to Jan. 24 at Carnegie Mellon University in Qatar. It was founded in 2012 by the Muslim Youth in Education City group.

Tehseen Niaz, co-founder of the competition and a 2016 Business graduate from CMU-Q and ex-president of the Muslim Student Association, discussed the journey behind the competition: “The name [Read and Rise] was taken from a hadith [saying of the Prophet Muhammad SAW]. It [the hadith] says ‘iqra wa irtaqi’, meaning read to rise.”

This year’s competition was restricted to Education City members only. The founders wanted to focus on a specific audience they could advertise to easily. Earlier in the year, EC students found several folded 500 QR bills lying around their campuses. Once they unfolded them, they discovered a message telling them that Islamic knowledge is more valuable than money.

“We’d throw them around and people would think they are 500 riyals but get surprised when they open them,” Niaz said. “We know only the last short suras in the Quran and think that our mission is done. The reason why I got involved in this project is due to the difference it [the Quran] made in my life,” he said.

Competition winner Reem Saad, a senior at Northwestern University in Qatar, described her experience as “smooth.” Saad started memorizing verses before signing up by repeatedly listening to them. She “implores” students to participate as memorizing the Quran brings a whole new meaning to one’s life.

“I may not have been confident, but my heart felt like it was in the right place,” Saad said. “I had found peace, solace, clarity, confidence and most importantly love for Allah.”

Non-Muslims also participated this year and were given resources needed in order to memorize verses. Non-Muslims who cannot read Arabic managed to memorize short verses, which encouraged them to read more of the Quran.

“Changing a life through Quran is rewarding, it is what keeps us going. I mean, it is a challenge between oneself rather than a competition,” said Niaz.

Correction – April 2, 2017:
A previous version of this article misidentified the number of winners. The story has since been updated to reflect the accurate information.