Features and concerns of the new building 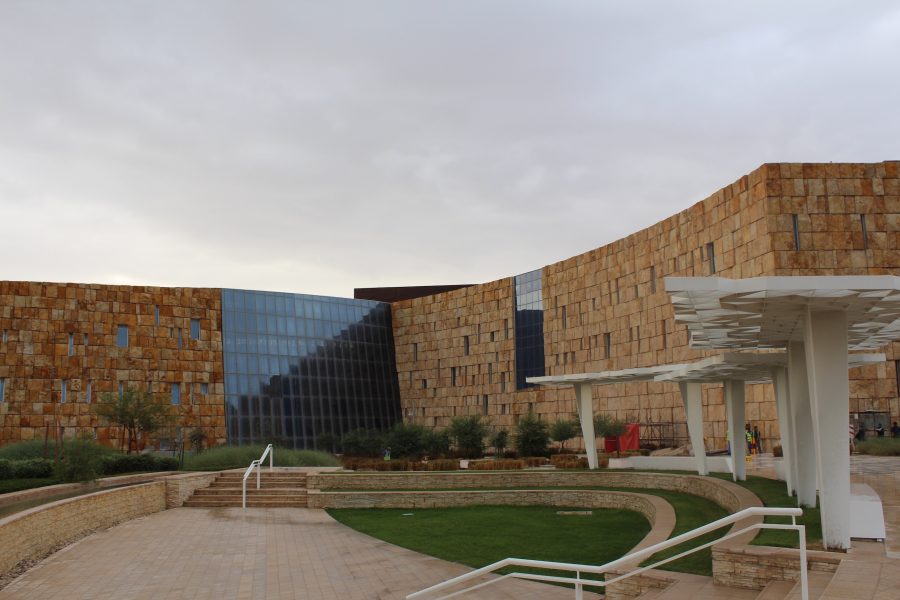 After much anticipation, the Northwestern University in Qatar community moved to their own building at the start of the Spring 2017 semester. Located next to the HBKU College of Islamic Studies and Georgetown University School of Foreign Service buildings, the new campus provides an array of state-of-the-art amenities. However, students have voiced several concerns about issues as they adjust to their new campus.

The Media Majlis is the first digital museum in the Arab world dedicated to the content of media, journalism and communication through global, regional and local lenses, according to Pamela Erskine-Loftus, director of The Media Majlis at Northwestern University in Qatar. The “interactive classroom” will explore the pasts, presents, and futures of media. It is a learning space that encourages engagement and content creation.

“It will serve as the ‘front door’ of NU-Q, its research, students, and faculty, and the wider Education City area,” said Erskine-Loftus.

The first exhibition, expected to launch in January 2018, will involve students hired from different Education City schools and feature their work on research projects. These research opportunities are planned to be open to the public.

Another digital media center will be a three-story wall consisting of several screens providing information through photos and videos. The Forum Video Wall will operate along with the large screen at the main entrance outside of the building, known as the Saif Tip. Both are expected to be functional in May, according to the information on NU-Q’s website.

Studio A is a black box space used to build sets. It is also where most training for equipment takes place. It is currently open. Studio B houses a sitcom-style set, which consists of an open plan kitchen, hallway, bedroom, and living and dining rooms. The set has movable walls and multiple set dressings. Studio C has two sections. One side is a chroma studio, which can transform the space into a blue or green screen. The other half is a photography studio accompanied with camera equipment. Studios B and C will open in the next couple of weeks.

“We also have for the first time a Foley Studio, which will allow students to experiment with post production sound effects and dubbing,” said Geoffrey Cannaby, director of production and digital media at NU-Q.

“I’m glad that we have everything in one place,” said Khalid Hussain Abdulla, a communication sophomore at NU-Q. “It’s good to have the studios in our building now.”

The Newsroom is a modular space for students to experiment with different show ideas. It is surrounded by automatic equipment, with a large video wall, social media set, interview area, news desk and robotic cameras. The Newsroom will be operational by the Fall 2017 semester.

The Projection Theater is a cinema screen with a surround-sound system. The room will also be equipped with cameras to record and stream events. Students can use NU-Q’s digital equipment to make projects and then showcase them in the Projection Theater.

The Black Box Theater will be a space to perform plays and produce videos. It is set to be ready by the end of February, according to the university’s website.

The Events Hall will be ready by the end of this month. Other large event venues include the Forum, the Auditorium and the Projection Theater, where lectures, screenings, panel discussions, and other interactive sessions can take place.

“We are exploring ways to enhance how we use events in the building and welcome ideas and suggestions from students, faculty and staff,” said DeYette Little, events manager at NU-Q. “Our new space gives us a great opportunity to be more creative and introduce a larger variety of events for the NU-Q community.”

The graduation ceremony for the Class of 2017 is expected to take place in the Events Hall on April 30.

“I’m excited for the new facilities,” said Malek Al-Manaa, a journalism freshman. “I think it will be fun that our graduation will take place inside the building, unlike how many universities typically have it elsewhere.”
[Best_Wordpress_Gallery id=”2″ gal_title=”Captured: NU-Q New Building”]

Lack of cafeteria
Even as the new building is still being put in order, students have raised some concerns about the logistical issues they have been facing.

Particularly, students say not having a cafeteria is problematic, and that the café option currently provided to them does not suffice as an alternative.

“In a café, just the smallest sandwich costs QR20, but in a cafeteria, you can get a meal for that amount,” said Amina Nikšić, communication sophomore at NU-Q. There are no “full meals” offered in the café, she added.

Nikšić said that most café items are sold out by noon and as a result, she is required to have lunch outside of NU-Q, typically at the Student Center.

“The positive side is that food is not bad and the staff is nice [at the café],” she added.

Sara Al-Ansari, a journalism sophomore, said that now in the new building, she has to wait until she has finished her classes for the day to have lunch at home. Her tight class schedule does not allow her enough time to go to nearby buildings for lunch.

According to Michael McDonough, director of health, safety, security and environment at NU-Q, the reason the new building does not have a cafeteria is because Qatar Foundation wants students to move around the different areas in Education City and mix with the rest of the community.

“In that respect, you need to look at it from a higher level, from a Qatar Foundation level,” McDonough said. “Qatar Foundation wants people to engage with each other and not sit in their little bubbles.”

The NU-Q administration has provided the students with a list of places they can have proper meals at, such as nearby GU-Q and HBKU Student Center.

Without a cafeteria, however, students say the NU-Q community has become somewhat separated.

“The cafeteria is considered to be a common area, where students, staff, and faculty come together,” Al-Ansari said. “There are many seating areas around the building, causing students to be scattered and hanging out in different areas. If we had a cafeteria, this wouldn’t have happened. There’s a place to gather and have lunch together.”

Other students disagree with the criticism and instead feel indifferent that the new building is without a cafeteria.

“I personally did not use the CMU-Q cafeteria too often [when NU-Q was housed there],” said Erzum Naqvi, communication sophomore at NU-Q. “Snacks and drinks are all I really need and a café can provide that.”

The new building has a dining hall and an industrial kitchen to accommodate external catering services for university events, McDonough said, adding that the coffee shop offers a local outlet for drinks and sandwiches and snacks.  People can order food in and the facilities department have put a warming service in the dining room consisting of microwave, hot water, toasters, etc.

“If we need to try and revisit this [problem], we can do so,” he added.

Jemina Legaspi, president of NU-Q’s Student Union and a communication senior, said the organization has appointed some of its members to help address concerns related to the new building.

“We recently started a committee called “New Building Committee” to voice out the concerns of students,” said Legaspi. “At the moment, members of this committee, under my supervision as well, are dealing with…such concerns, [including] the lack of affordable water in the coffee shop, lack of available printers for students, and many more.”

Some issues previously raised by students have been resolved, including installations of trash cans around the building and a safe route to walk to GU-Q. Others concerns are in the process of being resolved, such as around-the-clock availability of printers and cheaper water options in the café, according to Legaspi.

However, there still remain issues, such as a lack of bulletin boards around the building and recreation facilities in the Student Lounge, that have been put on hold.

At the NUQSU Open Meeting held on Sunday, Legaspi and McDonough both mentioned that Qatar Foundation owns the building and therefore manages decisions regarding the architecture and design of it. Such changes that wish to be made require time to review before action can be taken. “After QF does their bit, then we [NU-Q] can,” said McDonough.

According to McDonough, the NU-Q administration is working towards improving the facilities and services in the new building.

Al-Manaa is one student who is looking forward to what will come.

“Students will take time to make the building their own,” she said. “Over the years when more students are enrolled, it will become more university-like.”