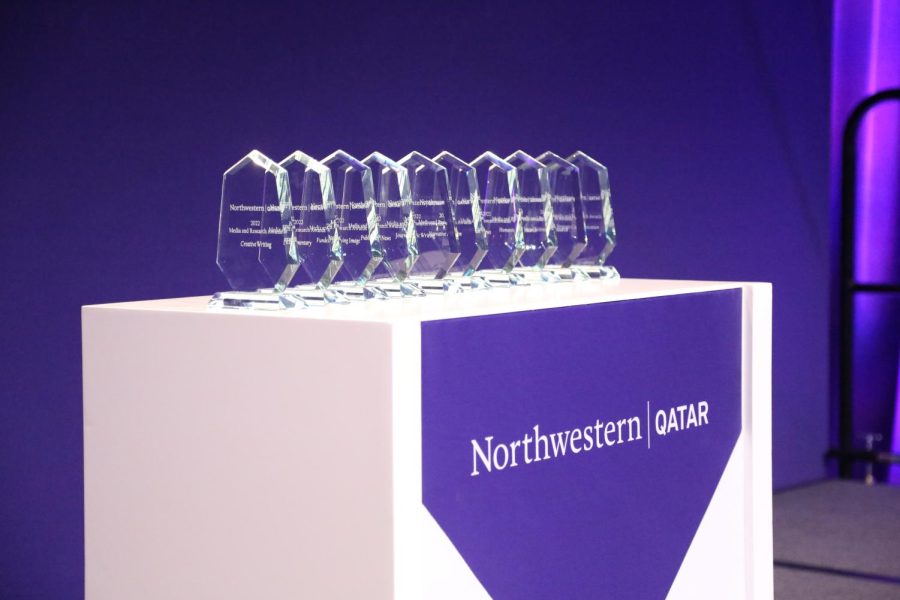 Northwestern Qatar (NU-Q) students’ diverse projects in journalism, communication and the liberal arts were honored at the 2022 Media and Research Awards held on March 24.

The awards ceremony, which returned to an in-person modality after being held online for the past two years, was preceded by a display of research projects and a networking session.

In the five-hour exhibition, participants presented their research findings to the jury as well as visitors. The projects ranged from a social science research paper on compulsive YouTube usage to a humanities project on “Gendered Messages in the Handmaid’s Tale.”

The exhibition was followed by an hour-long networking session where students and faculty met professionals from various media firms including the Doha Film Institute, Aljazeera, Ogilvy and BLJ Worldwide.

“Not only did the networking component allow me to speak with high-profile visitors, but it also allowed me to get to know industry professionals I admire on a more personal level,” said Sadick Mumin, a communications sophomore.

Yanis Cherif, whose visual news piece “Melodies in Distance” won the award for news, said he was “extremely motivated” to win the award after applying for three years.

“It feels incredible to see our hard work pay off,” said Nur Munawarah Hussein, director of “Love for Layla.” The film, produced by Aesha Hussein, was screened in October at the Studio 20Q Premiere held in Qatar Museums’ M7 at Msheireb Downtown Doha.

For many student creators, the Media and Research Awards are an opportunity to gain recognition for their work.

“The fact that your work has been nominated means it’s been appreciated,” said Menna Soliman, a winner of the documentary award. “It is nice to find yourself in a community where creativity is appreciated.”

Below is a complete list of winning and nominated projects:
Creative Writing