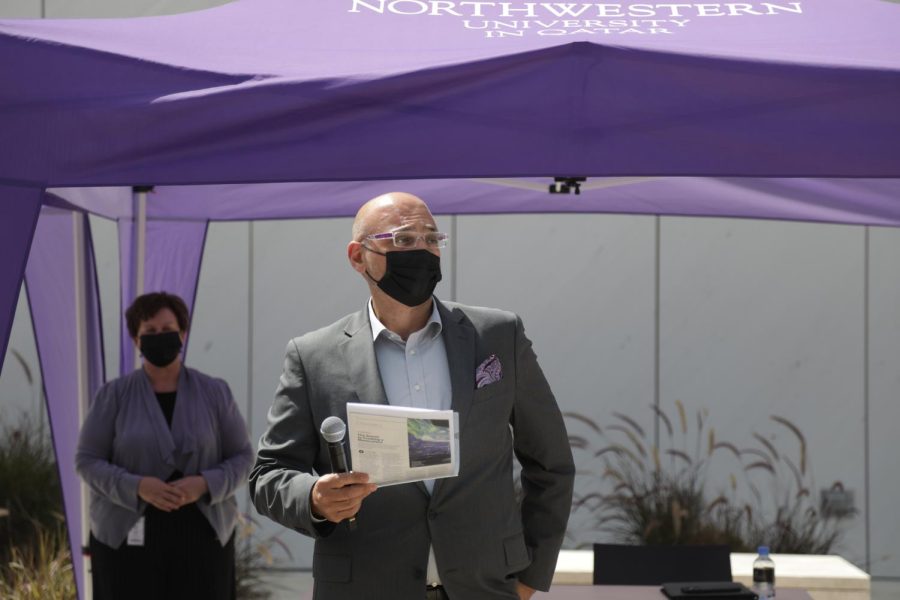 NU-Q will get additional faculty in residence in the fall semester, NU-Q Dean Marwan Kraidy said during the town hall meeting held for students on March 16.

Kraidy said the administration is working to ensure a seamless resumption of academic and extracurricular activities that were disrupted this academic year by the pandemic.

“We are still dealing with what is hoped to be the last consequence of the pandemic. We are conducting at least six searches now, and we will soon be announcing new full-time professors who will teach in exciting new areas,” he said.

Responding to students’ concerns about the lack of diversity in courses, Kraidy said the proposed new faculty members would teach a range of classes that will give students more options.

Kraidy opened the meeting by highlighting some of the students’ and faculty’s achievements. He also said the administration is working on a new grant to support students who are preparing to present their work at top academic conferences.

Kraidy also expressed enthusiasm about the return of NU-Q’s “cherished traditions” including the Creative Media Festival, Go Wild Week, the Media and Research Awards, and graduation.

Zero Dimachkie, a communications junior, echoed the dean’s enthusiasm for campus activities by urging fellow students to participate in the Go Wild Week events on March 21 and 23.

Afnan Tag and Shaika Alkubaisi, representatives of the class of 2022, expressed disappointment with the university’s choice to hold graduation on campus, citing the limited capacity for guests. Kraidy and Senior Associate Dean Kathleen Hewett-Smith explained that the event is planned in accordance with Ministry of Public Health guidelines while noting that a change in regulations is expected in the coming weeks.

“Graduation is something that the institution provides its students,” Hewett-Smith said. “It’s our way of celebrating you.”

Aneesa Khan, a communications senior, suggested that attendance could be made optional for staff to allow students to invite more family members, and Kraidy said he would look into it.

Students also asked about information sessions for the Journalism Residency program. Hasena Yahya, a journalism sophomore, pointed out the current lack of information about procedures for next year’s residencies for rising journalism juniors. “We’re looking for nothing too significant or expensive,” she explained, “just a Zoom or an email about our journalism residency.”

Hewett-Smith said an information session is being planned and the date will be announced soon. She also mentioned that a new guidebook is being prepared to assist students with the residency application process. “We are trying to be a little more complete in terms of the information students should receive, which is why it’s taking a little longer,” she said.

Wasay Mir, a journalism sophomore, mentioned that student travel has been halted in recent years, particularly the student ambassador program. Kraidy said there had been no budget cuts for student travel opportunities. Alex Schultes, assistant dean for student experience, said his office will issue an update on student trips within the next week.

Students also asked about the accommodations NU-Q will make for students during Ramadan, which is expected to begin on April 2. Al Anood Al Wahaibi, a journalism senior, expressed her concern about graduation being held on April 25 during Ramadan.

Kraidy replied that the date was chosen as the best option to suit all of the institution’s students and stakeholders who need to be present at the event.

Regarding varying class schedules during Ramadan, Hewett-Smith said every university in Education City has discussed the matter extensively, and faculty members have been informed of the situation and are willing to make changes depending on the class.