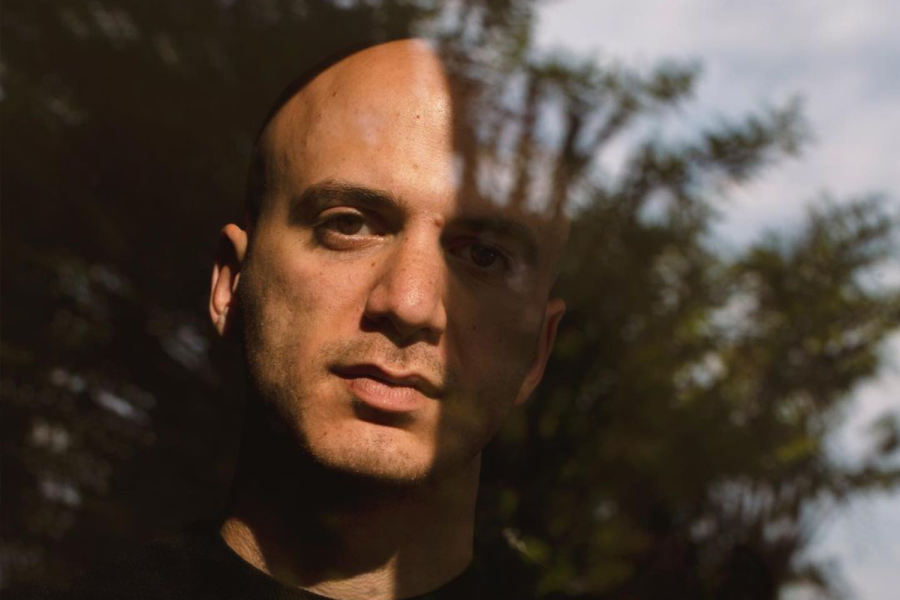 Telling a story is an act of giving, said Hassan Akkad, a London-based, Syrian documentary filmmaker, writer and refugee-rights activist during a webinar at Northwestern University in Qatar on Monday.

As a part of the Hiwar Speaker series, Akkad shared his journey over the last 11 years of using film as a means of activism. The community-wide discussion was moderated by Rana Kazkaz, assistant professor of communication and an award-winning filmmaker.

The dialogue, or “hiwar” in Arabic, started with Akkad, 34, describing his early life and work in Syria, which were impacted by the Arab Spring and the resulting Syrian civil war. In 2011 Akkad was working as an English teacher in Damascus when peaceful protests erupted against the government of President Bashar al-Assad.

“I had absolutely no knowledge of politics whatsoever, as a result of living in a dictatorship where we’re politically hijacked,” Akkad said.

He decided to join the protests following an incident in the southern Syrian town of Dara’a, where security forces arrested and tortured 15 schoolchildren for drawing graffiti on a wall.

“I started filming protests and putting the footage online for people to watch, which was a very risky thing to do,” said Akkad about the days he first started filming. He was soon after arrested and tortured at a protest by “one of the most notorious security branches in Damascus called 215.”

“We got severely beaten. I nearly lost my left leg as a result,” said Akkad, who was imprisoned with around 100 others in a 60-square-meter cell where “everyone was stacked on top of one another.”

When he was released after two weeks, his story reached Assad, who invited him and several others to have a conversation at the presidential palace. In his “youthful naiveté,” Akkad said, he was hopeful that he could convince the president to stop cracking down on protestors. “I said, ‘Stop torturing people.’ I said, ‘You are making your own enemies,’” Akkad recalled imploring Assad for 40 minutes.

Akkad was arrested for the second time after a couple of months, placed in solitary confinement and released on a couple of conditions including being banned from teaching again in Syria.

“I left as a broken soul. I just couldn’t imagine living in Syria anymore,” said Akkad, who spent the next couple of years living in various Arab countries before departing for Europe in 2015 as a refugee and eventually seeking asylum in the U.K.

During the webinar, Akkad recounted his 87-day journey across Europe, which he documented using his smartphone camera. Some of this footage appeared in the BBC documentary “Exodus: Our Journey to Europe,” which won two BAFTA awards in 2017.

On June 11, 2015, Akkad had boarded a small dinghy in Turkey, hoping to reach Greece via the Aegean Sea, only to get picked up by the Turkish coast guard after the boat sank. After reaching the Greek mainland, Akkad traveled across 10 countries, stayed at the Calais jungle, a refugee camp in northern France, and got arrested multiple times by the French border control for attempting to board the Eurostar train to England. Eventually, he used a fake passport to travel to England through Belgium.

“That was the end of the physical journey, but then you disembark on another journey through Britain trying to rebuild your life,” Akkad said. He settled in Brixton and started working in TV consultancy while also raising money with local charities for Syrian refugees until the COVID pandemic struck.

The pandemic triggered Akkad’s PTSD. “When you don’t have agency of what’s happening in the situation, you panic,” he said. “COVID did exactly that. It robbed me of my agency.”  Akkad then started working as a cleaner for the NHS at Whipps Cross Hospital.

“I hate to use military terms, but it was like a war. It was like a war in the hospital, and we were in the trenches of that war. That’s why they call it the frontline,” said Akkad, describing his experience of working in a ward where he was surrounded by 18 COVID patients during  his eight-hour shift every day.

On his lunch breaks, Akkad started capturing portraits of his colleagues, all migrant workers, which were published on the Politico website. One in the collection, a portrait of his colleague Gimba was selected for the national portrait gallery and featured on screens at Piccadilly Circus.

In April 2020, the government introduced a bereavement scheme granting indefinite leave to the families of foreign NHS workers if they die from exposure to COVID. Upon learning that NHS cleaners and porters were excluded from this scheme, Akkad recorded a video message for Prime Minister Boris Johnson and posted it on Twitter.

“Four hours after I posted this video, the government issued a U-turn and decided to change the law and include everybody in the bereavement scheme,” Akkad said.

This change in the government’s policy was instrumental in restoring Akkad’s confidence in his ability to bring change. “When I left Syria, I was a broken soul. I felt like I couldn’t do anything. I couldn’t change anything,” he said.

Since then, Akkad has continued to advocate for refugees among other projects. In 2020 he helped artist Marc Quinn create and install the “A Surge of Power” statue, featuring a Black Lives Matter protester, Jen Reid, in a Black Power salute after the statue of Edward Colston, a Bristol merchant involved in the trans-Atlantic slave trade, was destroyed by protesters in the U.K.

During the webinar, Akkad also discussed his autobiographical book, “Hope Not Fear,” which was published in 2021 and further bolstered his confidence. “With a book, I had total agency of what I wanted to say about what I’ve gone through,” he added.

Looking forward, Akkad said he plans to take the first flight back to Syria whenever it is safe.

“I would like to go back to that classroom where I was teaching, because I think rebuilding society starts from the classroom,” he said.