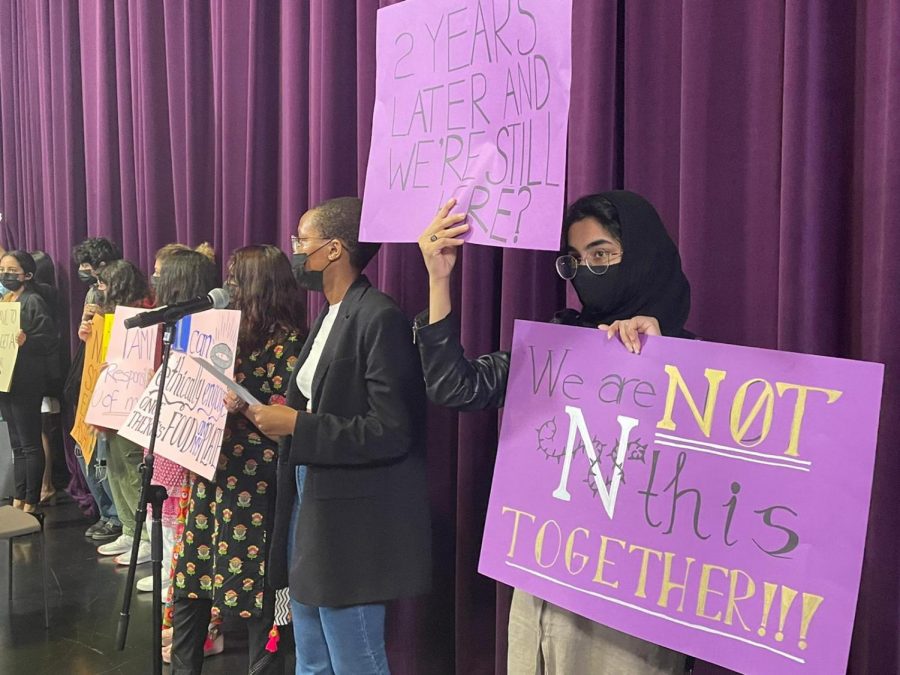 NU-Q students organized a peaceful protest during the Town Hall meeting held on Nov. 3 to raise concerns with Marwan Kraidy, dean and CEO.

Before the Town Hall meeting, organizers of the student protest emailed a statement to the NU-Q student body, faculty and staff to voice concerns and get community support.

to increase the students’ minimum wage from QAR 27 per hour to at least QAR 35
for actions to prevent discrimination against South Asian students, racism against Black students, and hate against the Chinese student community
for better representation of minority groups in faculty and courses
to increase the number of personnel overseeing the Journalism Residency program
to establish an NU-Q-based Office of Equity in Qatar to make equity procedures easier
to improve communication and transparency between administration and students
to provide effective mental health and well-being services

The statement said students feel that their concerns “remain unheard” and “it has become clear that the students’ wellbeing is not the institution’s priority.”

Iffah Kitchlew, a journalism senior and one of the protest organizers noted that these concerns have been raised in previous town hall meetings and coffee sessions with the dean, however, “it felt like our voices are not being heard,” she said in an interview with the Daily-Q.

“This is something that had happened two years ago, and the protest last time did achieve some amount of institutional reform. So, we kind of use that as a jumping point,” said Kitchlew.

Two years before, on the same date, students held a similar protest after tweets from Justin Martin, a former faculty member at the university, wrote on the alleged racist remarks from Everette Dennis, the former dean and CEO of NU-Q.

Before the community dialogue, this statement was sent to faculty and staff and 15 student organizations, including the NU-Q Student Union and several cultural clubs, signed the statement, which said many of the issues it included have long concerned students, but few changes and reforms have been made.

Student protesters held posters as they gathered in front of the Events Hall. NU-Q administrators including Kraidy, Craig LaMay, director of the journalism and strategic communication program, Kathleen Hewett-Smith, academic dean, and Alex Schultes, assistant dean for the student experience, were present.

After opening remarks, Kraidy led a moment of silence for Fawaz Jamal J. A. Al-Mudahka ’23 (Adam Jones), a student who died earlier this semester. Then a lineup of students began to voice their concerns.

Currently, NU-Q students make a minimum wage of QAR 27 per hour for their student jobs. With some students having increased expected family contributions, low student wages and decreased working hours during breaks have been a cause of concern.

Khadija Ahmad, a communication junior and one of the protest organizers, said the minimum wage does not cover yearly tuition increases, hindering students and their families from paying the expected family contribution (EFC).

Most universities within Education City have minimum wages that correspond with those on their home campuses. According to student pay and working hours on Northwestern’s Evanston campus, NU-Q students are demanding that their minimum wage be increased to at least QAR 35 per hour. Further, they noted that recent changes in student employment policy allow them to work only 20 hours a week during breaks instead of 40.

Regarding journalism residencies, student protesters noted that the retirement over the summer of Mary Dedinsky, former director of the journalism and strategic communication program, caused an “abrupt change” in the process, which has now “been mishandled, severely affecting those who need to do their JR (Journalism Residency) in Spring 2022,” according to the statement.

“We think that one administrator for our residencies is simply not enough,” said Monazza Asif, one of the organizers. Asif, a journalism junior, plans to go on JR next semester.

The JR program is an opportunity for third-year journalism students to get hands-on experience working at one of the dozens of top-tier news agencies or public relations firms across the globe.

In response, at the Town Hall LaMay said  “29 students [from the batch of 2023] are eligible while 6 have not turned in their documents. Out of those 29, 16 have been placed and 13 waitlisted.

“Post-covid, a lot of organizations are working remotely, and neither in Evanston or in Qatar’s campus is any student guaranteed a location, ” LaMay added. “We will have a full-time staffer, and I will ask my faculty to find the locations. There needs to be a more professional program, I couldn’t agree more.”

Many students who spoke at the protest told personal stories about what they believe are injustices they face from the institution. Ahmad advocated for more representation of South Asian identity in courses and faculty. Hanqueen Wu, president of the Chinese Student Association, said she and her Chinese peers have experienced expressions of racism by other students.

“We faced racist comments such as your government is the one developing the [corona] virus. It’s very heartbreaking to hear from our peers talking about this,” Wu said.

Kraidy responded by saying, “My job as dean is to take care of the entire community, and my initial strategy is to be inclusive.” According to the dean, Northwestern students have faced racism and discrimination, and he agreed that there needs to be more South Asian representation in the faculty while at the same time saying it is difficult to accommodate everyone in such a diverse community.

Students also raised concerns about the process of reporting Title IX cases on campus. One of the organizers shared their personal experiences with Title IX procedures and said Student Affairs was not understanding.

Fourth-year journalism student Nadege Bizimungu said her experience has been an exhausting and retraumatizing process.

“If I could go back, I would not go through this process,” said Bizimungu, whose Title IX case took a year to close.

To address these concerns, Kraidy mentioned changes made by the administration, including Title IX training and changes to the current financial aid system.

Schultes said the Office of Equity will hold three student training sessions over the next six months starting at the end of November. He said, “We are committed to change and we look forward to the future working with all of you.”

Earlier this year, Hewett-Smith sent an email regarding the creation of the NU-Q Institutional Equity Working Group, which aims to provide a safe environment free of discrimination, harassment, and sexual misconduct for all community members.

Ahmad, a member of the working group, said at the Town Hall, “That working group has not been active all semester, and no active measures were being taken.”

Protestors also voiced concerns about mental health and accessibility services within the community. Last year, Kitchlew said, her sister was terminally ill, so she reached out to health and wellness for accommodation.

“We want communication channels that are established between departments, so that students who have very real and legitimate problems do not have to depend upon faculty maybe being understanding, and so that the burden to explain what how they’re struggling or why they’re struggling is not put on students but is put on health and wellness,” she added.

Kraidy said when he travels to Evanston in a few weeks he will raise many of these concerns, including the possibility of establishing a local Office of Equity.

When a student asked the dean how much time it would take to produce solutions, Kraidy replied, “There’s no excuse to delay, but these steps by necessity do take some time.”

Disclaimer: Nadege Bizimungu, the managing editor of the Daily Q was one of the organizers of the protest. Bizimungu did not play any role in the reporting or editing of this article.

An earlier version of the story