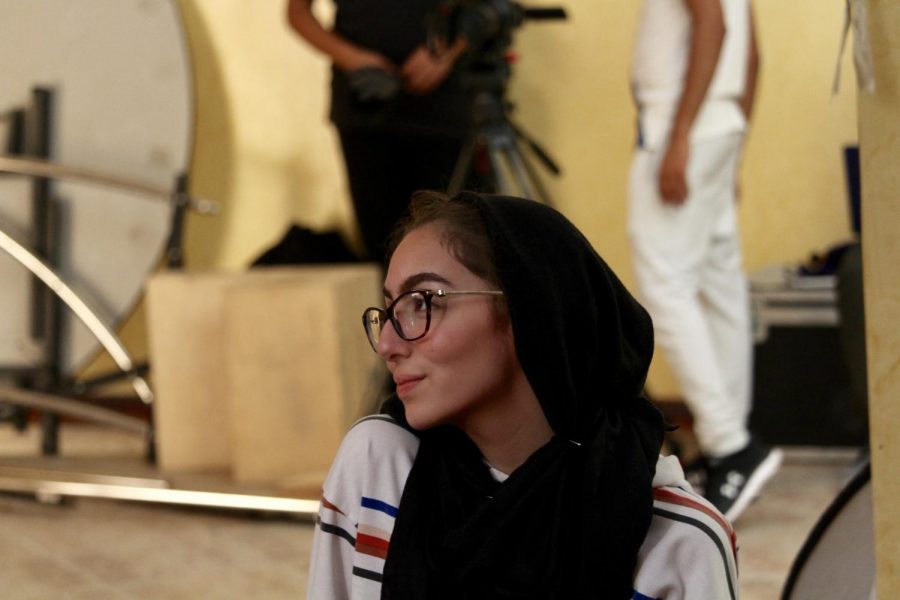 Danna Takriti on a film set for the short film “Esh El Barri” in which she was the art director, Doha in September 2019 (Photo/ Danna Takriti)

Growing up, Danna Takriti used to read stories about Palestine and felt mainstream media misrepresented the plight of Palestinians. As a Palestinian woman herself, she hopes to report on humanitarian stories that are pushed under the rug by using journalistic knowledge and skills she gained from NU-Q for the past four year. Takriti aspires to contribute to changing narratives in storytelling and centering voices that have been marginalized.

“The impact should be that people are able to read the news and feel like that sort of story is well representative of the people it’s about,” she said. “The kind of impact I would like to have is to make someone feel like their story is not being misrepresented but told the way it’s supposed to be told, and the way that they want it to be told.”

When she graduated from Doha British High School, Takriti was not sure about the path she wanted to pursue. She was passionate about arts but at the same time, she enjoyed storytelling through painting, sculpting, filmmaking and writing. Initially drawn to pursue a degree in art, Takriti reconsidered her decision and decided that it was not the best direction for her to tell stories the way she envisioned.

“There was also a lot of stigma around getting art as a degree, a lot of times people would say, ‘Oh, what are you going to do with an art degree, paint for a living?’” she added.

She then decided to attend Northwestern University in Qatar.

Takriti chose NU-Q because it would allow her to explore different mediums of storytelling while gaining valuable skills in print journalism, short film production and podcasts.

“Putting a story out there, whatever medium that is, that’s why I think I really liked going to Northwestern because I felt like I had leeway to do any sort of storytelling that I wanted to do,” she explained.

She was able to experiment with everything over the past four years. She loved the diversity of the courses, the people she met, and the valuable lessons she learned while being involved in Studio 20Q projects.

“I got the opportunity to experiment with set design, being a makeup artist and art director. So, I kinda got the best of both worlds,” she said.

When she first joined NU-Q, she was confused about which major to choose.  She was initially leaning towards communications and filmmaking after taking a class with Professor Scott Curtis.

She later decided to major in journalism because she felt it was a more flexible degree that would allow her to enjoy the best of both worlds. She added that the strategic communication certificate gave her a lot of flexibility and opened up all kinds of opportunities to her.

Takriti’s passion for storytelling helped her learn from her university experience and take full advantage of the opportunities offered to her. She was involved both in activities relating to filmmaking but completed internships with prominent news organizations such as Al Jazeera.

In her junior year, Takriti traveled to Washington D.C. to do her journalism residency internship with VOX. She described the experience as profoundly transformative and highly enjoyable.

“Honestly my journalism residency was the highlight of my entire four years; it gave me so much experience. It…pushed me into the real world really quickly.”

Initially, Takriti was given the task of editing other people’s articles, but eventually, she decided to start pitching her own stories. She challenged herself and wrote pieces for the agency, which helped her further hone her writing skills.

“It really impacted me, it kind of pushed me to feel how it is to be in journalism from a professional perspective. I was able to meet so many people, I was able to get to know so many sources, and I think it really changed me.”

During her four years at NU-Q, Takriti applied to different travel opportunities, and in her sophomore year, she was selected to be a student ambassador. This allowed her to travel to the Evanston campus for a week.

Reflecting on this experience, Takriti said it made her “appreciate NU-Q even more,” primarily because of the small student body and the closeness of the community.

Takriti’s university experience was also shaped by the co-curricular activities she was involved in, which allowed her to develop leadership and communication skills. As the co-president of the Weekly Challenge club, she was able to organize community events that engaged and challenged students.

“It honestly was such a great experience because we got to meet so many people who joined the club that we may have otherwise never met,” she said.

She was also part of the Palestinian club and served as social media manager in 2019. The club allowed her to network with people from different EC universities, who shared the same passions and interests.

After the pandemic though, Takriti said her university experience was considerably altered.

“I feel like we missed out a lot. Because as a senior, you expect to have all the seniors celebrations, like the last lecture in person, but that didn’t happen,” she explained.

Takriti used to look up to seniors as a freshman, and it would get her excited about graduation. Now that graduation will just be online, she feels frustrated.

“Even from a digital perspective, we didn’t really have a proper celebration…I feel like it was anti-climactic, we are going to end on zoom and then that’s it, we didn’t get any sort of recognition,” she said.

Despite this, Takriti is very grateful for the lessons she learned at NU-Q.

Compared to her high school, her experience at NU-Q has been more diverse. It has exposed her to more perspectives and knowledge, which opened up new avenues.

“Obviously, there is a lot of room for improvement, but I think…the sort of diverse and well-rounded information I was able to get at NU-Q was a huge step forward for me,” she added.

Takriti was awarded the liberal arts award in celebration of her accomplishments. She hopes to embark on a journey to tell important stories to the world. For the time being, she will delay plans to pursue her master’s since she wants to get work experience first.

She applied to both PR, marketing, and journalism agencies, and she is currently going through the job search process.

“There is still nothing set for me yet…but I think I am going more into strat-com, journalism sort of route.”

Reflecting on the future of journalism as a graduate of a media school, Takriti said journalism is very important and will continue to exist.

“Journalism will never die, maybe the way it is done will change, but I don’t think it will ever die,” she said.

She added that journalism has an important role within society and that without it, people’s only source of information would be the government with no entity to hold them accountable.

“Everyone consumes journalism on a daily basis, they just don’t really notice it.”

The only drawback is that it is indeed a difficult job and one that makes it hard to make a living especially with limited options, she added.  That is why a lot of times, graduates choose to go into public relations or marketing. However, Takriti emphasized that with journalism, you can make a bigger impact.

Takriti concluded that despite the pandemic, she will remember her university experience fondly.

“I think I am a completely different person from the person who walked in.  I think that in every single way, whether it’s from social life matters or academics. The lessons that I took really shaped the way I think a lot,” she said.

Takriti has been described by her professors as a talented student with a bright future.

“Danna’s story sense, empathy, and writing skills have made her not just an excellent journalism student but has prepared her to become an excellent reporter and storyteller who is ready to produce narratives that are under-represented in today’s media ecology,” said Professor Ibrahim Abusharif, an associate professor at NUQ.