Rising From the Ashes: the Revival of Qatar’s Theatre Scene 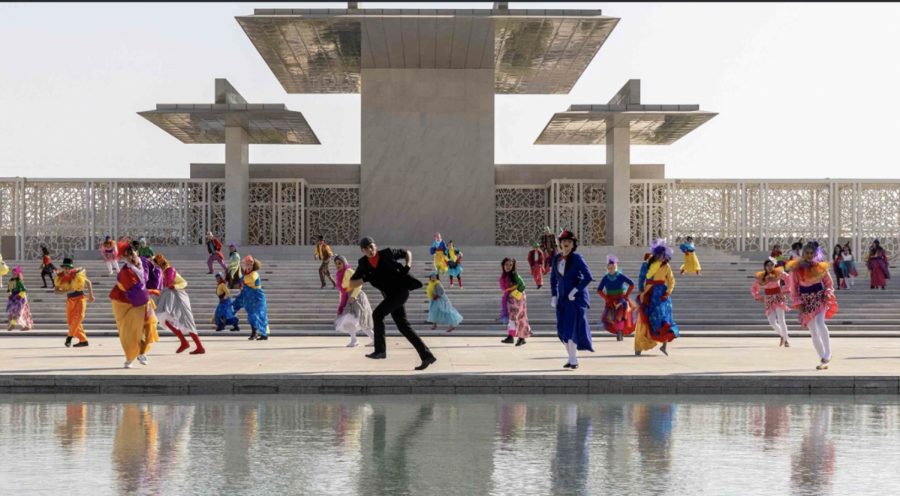 It was Saturday, March 19, 2005. A large crowd gathered inside the Doha Players theatre to watch a production of Shakespeare’s “Twelfth Night.” This performance was part of a celebration for the 50th anniversary of the Doha Players in Qatar. Right before the show climaxed, an SUV with a car bomb drove inside the theatre complex taking the life of the play’s director Jon Adams and severely injuring 12 audience members. The severity of the blast caused an entire building in the complex to collapse into the ground and damaged dozens of cars nearby.

Even now, nearly 16 years later, this tragic attack looms over Qatar’s theatres and its people. Actors and theatre goers were deeply affected by this incident, slowly refraining from involving themselves in theatre over the years, according to Elaine Potter, chairwoman of the Doha Players Theatre group.

Theatre and the performing arts have been a significant part of Qatar’s culture. With establishments like the Qatar National Theatre, Qatar National Convention Centre and the amphitheater in Katara, the people of Qatar have been actively involved in plays and productions, stated Jane Williams, chairwoman of the Mockingbird Academy for Performing Arts in Doha. Even though Qatar’s theatre scene did dim down after the terrorist attack in 2005, theatre enthusiasts in the country are going back to appreciating and participating in theatre performances—even during a global pandemic.

Potter was present at the time of the attack; she recounted that both the audience and the cast were deeply affected by the incident. “However, this was not going to destroy our multifaceted society,” she said. From then onwards, the Doha Players continued their productions, albeit with a fewer number of actors and attendees.

“Her Highness Sheikha Moza and Her Excellency Sheikha Mayyassa contributed to the Doha Players and made efforts to relocate the theatre and the cast,” said Potter. Gradually, the actors started to resume productions with great valor and even greater enthusiasm. The Doha Players have since produced yearly pantomimes as well.

Williams arrived in Qatar in 2013 as an actress and a theatre instructor. Her first production in Qatar was “Peter Pan,” where she collaborated with the Doha Players. Over 100 actors auditioned for the play. The overwhelming response that the production received and the clear lack of theatre opportunities for women and children that she had noticed, motivated Jane to initiate professional acting and dancing classes in Qatar.

According to Williams, she observed a disconnect between people wanting to be involved in the performing arts but not having viable opportunities to do so. “I like to think that we are offering young people to go on and have a career in acting, we’ve certainly had students that have gone on to drama schools in America and England,” she said.  However, according to Potter, actors who wish to be a part of the Doha Players do not necessarily have to take professional classes. “You just have to keep an eye on our newsletters and call for auditions, everyone is welcome as long as they are ready to commit,” she said.

Gentë Retkoceri, an actress from Kosovo, arrived in Qatar to pursue her masters in fine arts at Virginia Commonwealth University in Qatar. Soon after, she realized opportunities for adults in theatre are fairly minimal. “When I first came to Qatar I thought my career as an actress would not continue,” said Retkoceri. After securing her masters in theatre education, Retkoceri began offering adult acting classes through the Film and Theatre Academy in Qatar. “Through my classes I am working towards incorporating film, theatre, acting and design,” she said.

Independent classes from Williams, Retkoceri and Potter were some of the many channels that ignited the revival of theatre in Qatar. Their classes revolve around musical theatre, dance and acting. While paid acting classes were a way to reintroduce performance art in the country, it naturally restrained certain income groups of people from participating.

In order to make theatre and dance more accessible and inclusive, underrepresented communities have initiated their own theatre troupes. Tanghalang Overseas Pinoy (TO.Pi) is a non-profit theatre company that was founded in 2005 by Filipino expatriates in Qatar. Kristine Marie San Juan, president of Tanghalang Overseas Pinoy, worked on a critically acclaimed production of “Alikabok” (Dust) held in the Awsaj academy theatre in Qatar Foundation. The play revolved around Filipino heritage and colonialism in the Philippines.

“TO.Pi is a safe space for all the Filipinos in Qatar who love to sing and dance, we are passionate about performance and our goal is to share it with the country,” said Juan. Inclusivity is strongly advocated for by the members of TO.Pi; their motto revolves around showing the Filipino community from a different perspective. “We want to show that the Filipino people are vibrant, are great singers and dancers all while working hard in Qatar,” said Juan

TO.Pi has also produced a number of independent musicals. With colorful costumes and captivating sonnets, the theatre group is committed to introducing the Filipino culture in theatre. “I had to learn about my heritage and make sure every costume represents the Philippines; all obviously while being within the budget,” said Roland Debuque, independent fashion designer and costume designer for TO.Pi, explaining how he researched and visualized the costumes for “Alikabok.”

According to Juan, participating in theatre during busy work schedules is a hefty commitment. Members of TO.Pi meet for rehearsals every Friday. “Our members come from different economic backgrounds so we usually just chip in 15 Riyals each to rent a place for five hours to rehearse since we don’t have a community theatre,” she said.

Film and theatre production also have been challenged through social and cultural norms in Qatar. According to Williams and Potter, scripts go through an intensive censorship process that needs to adhere to cultural guidelines. “We have to make cuts in some scripts. Obviously, the writers would not agree to the scripts being censored as it is somebody’s work of art,” said Potter.

Scripts usually undergo rigorous editing and rewriting in order to ensure content is appropriate for the Qatari audience. For example, performing pantomimes is a long standing tradition with the Doha Players community. According to Potter, the pantomimes performed in Qatar do not include jokes with sexual connotations and language that may be considered obscene. “One of the key practices of performing pantomimes is that for comedic purposes men dress up as women and vice versa however we definitely cannot do that here,” she said.

While many Arab and Qatari women have shown interest in musical theatre, there are certain social and cultural shortcomings that restrain them from performing, stated Elizabeth Hake, an acting and dance instructor at the Mockingbird Academy. According to Hake, local women are eager for their children to get involved in performing arts and even show interest themselves, however, their social commitments restrict them from doing so.

In William’s experience, social expectations have constrained many Qatari women from performing on stage regardless of their participation and interest. “Even after rehearsing tirelessly, some of the girls towards the end of the project were not able to perform on stage and decided to take roles backstage, but nevertheless, they were involved and loved being involved,” said Williams.

Theatre troupes in Qatar usually lack male actors too, she added. Performance art requires extensive effort, especially in terms of learning and rehearsing scripts. Therefore, men with strict work commitments do not participate in theatre. Men are apprehensive about acting and dancing in public as it is not as widespread in Qatar. Therefore, most men steer away from the performing arts, Williams said.

Retkoceri has observed that the expatriate community in Qatar is relatively keener to learn about acting than Qatari nationals. “Most of my students are international and belong to several age groups,” she said.

According to Retkoceri, courses at the Film and Theatre academy are designed to enable students to pursue acting professionally. Simultaneously, Retkoceri and Hake have also designed contemporary dance and theatre classes that cater specifically to Qatari women.  “I advertised for a contemporary theatre class, and it did get a lot of females to come to me and specifically say that they would like it just to be a female class, so we moved forward with that,” said Hake.

During the COVID-19 pandemic, many theatre groups have resorted to online classes, rehearsals and auditions. “We have been working on projects for a year now via Zoom, meeting on the beaches, just to make it viable, and keeping the energy of the piece going through all these challenges,” said Williams.

Members of TO.Pi struggled through the pandemic as well. “Theatre for us is a form of enjoyment and community because at the end we all have each other but because of the pandemic most of the actors have not seen each other in a year,” said Juan.

Although most acting classes have switched to Zoom, theatre enthusiasts in Qatar are still getting up to speed with ongoing productions. The recent SHOWTIME! Virtual Musical Theatre production by Qatar Foundation schools’ staff and students involved several young thespians performing a virtual spectacle filled with colors and music. “Shows like this give us a lot of hope because they signify the revival of theatre in Qatar,” said Potter.

Williams and Potter are currently working on a production of a play called “The Blue Stockings” by Jessica Swale about the first women who went to Cambridge University. “We are very excited to see some incredible work by both children and adults,” said Williams.

While the theatre scene in Qatar is reigniting, Retkoceri aspires to create a space where people in Qatar can actively join theatre and commit to it. Likewise, Williams hopes to create classes by making the Mockingbird academy more inclusive of genders and ethnicities. “There’s so much talent here and so many different cultures here that you could embrace,” said Williams.

Theatre troupes in Qatar are definitely making an effort to instill the passion for theatre amongst the Qatari community, however, they require additional assistance from the Ministry of Culture. According to Potter and Jaun, there are not any open spaces for people to perform and dance. Even before the pandemic, theatres in Qatar, although well-established, were too expensive to rent. Therefore, the thespian community in Qatar is hopeful for a time when performing arts will be actively weaved into the cultural sites of Qatar.

“There are so many empty spaces but no one goes, that amphitheater in Qatar is crying out for a wonderful outdoor performance of “A Midsummer Night’s Dream,” said Williams.