The Year 2020: A Retrospective Gaze from the Black Radical Tradition 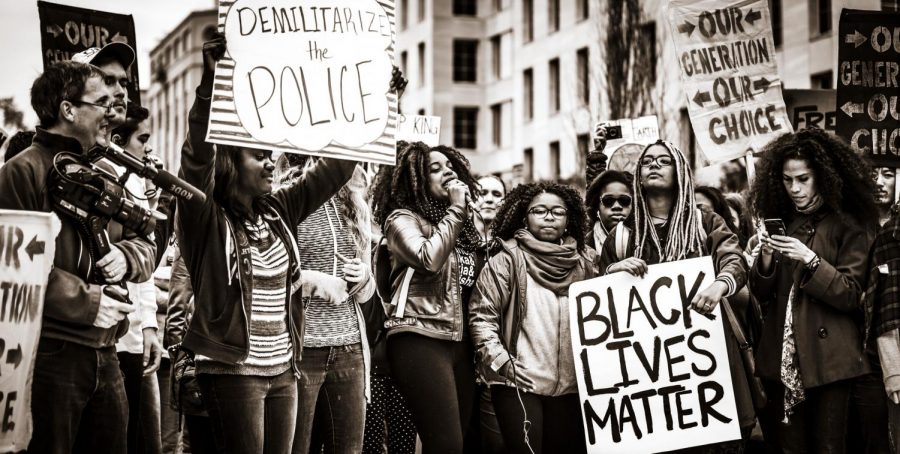 Understanding the events of 2020 would require us to adopt a perspective of the past and of the present, said Bedour Alagraa, associate professor of political and social thought at the University of Texas in Austin, in a virtual event held on April 8.

This event was organized by the Northwestern University in Qatar Faculty Working Group on Race and co-sponsored by the Liberal Arts Program and the Middle East Studies Committee at NU-Q. The discussion was moderated by Associate Professor Zachary Wright.

Alagraa drew from her research on Black political thought to discuss the concept of race and the Black radical tradition, in light of recent events.

She began by emphasizing that fascism and far-right violence in the US is not a new phenomenon but is rooted in the country’s colonial history and record on slavery. “Fascism in this country has always been presented as an external predicament when in actuality, it’s been hidden in plain sight here from the very inception,” she said.

To explain this, she drew a parallel with the historical rise of fascism in Europe in the 1940s.

“These types of politics, totalitarianism and fascism in Europe, were only made possible via the liberal disavowal of colonial violence,” she said.

Alagraa cited the work of Hanna Arendt, who identified narcissism and Stalinism as the founding stones that led to fascism in Europe. She then went on to explain that similarly, Aime

Cesaire argues that in the U.S., it was colonial domination that led to the same results.

In order to fully understand the violence of fascism in Europe, one must take a closer look to its colonies and analyze the “colonial encounter” to explain this complex phenomenon, she said, adding, “this is how I think we should think about the year 2020 as well.”

Alagraa cited Cesaire’s work to help identify the boomerang effect of the predicament of racism and the rise of fascism in today’s world.

She gave the example of the events at the Capitol Hill, in which ordinary people violently stormed the Capitol building, in a bid to overturn the U.S. election results.

The Capitol Hill rioters were ordinary citizens, which is something that might appear quite unusual. But according to Alagraa, the work of Cesaire can help us understand this peculiarity.

“It’s not merely material violence that accomplishes the task of colonial domination, but rather the whole of society at every level, either through complicity, participation, or disavowal is responsible for the appearance of these forms of spectacular violence,” she said.

Alagraa also referred to a panoply of writers such as Frantz Fanon, Sylvia Wynter, and Cedric Robinson. She used passages and interpretations from their work to analyze movements of liberation from colonialism and fascism.

Alagraa went on to explain that the Black radical tradition offers us a framework to “understand how the fatal coupling of white supremacy and the violence of colonial expansion operates.”

Alagraa also highlighted that examining the roots of Black radicalism is especially important to help us understand that “this radicalism is derived from a distinct cosmology carried by enslaved Africans during the middle passage.”

In the new world, enslaved Africans used their African indigenous cosmology to inform their struggle and spur the critique of the colonial enterprise and assert their freedom, she explained. This awakening spurred the establishment of Maroon communities, who formed settlements away from the colonies and fled slavery.

“These were ways for enslaved Africans to articulate community belonging in the peculiar geographic instructional confinement of the new world,” she added.

Alagraa highlighted that “the point of entry for Black radicalism” is situated in this moment of historical awakening of the African consciousness and that “it is not simply an opposition to capitalism and colonialism.”

The Black radical tradition was aimed at asserting the collective being and freedom of Black people of African descent, she added.  It was a renewed awakening and “the rediscovery of a dignified African historical presence.”

The year 2020 can be seen as a continuation of past strivings for liberation and reaffirmation of identity. The global Black Lives Matter movement in the wake of George Floyd’s killing can be contextualized as part of the Black radical tradition. Alagraa emphasized that this moment is a reminder for us to forge ethical solidarity in the face of renewed fascism and imperialism.

“The Black Lives Matter movement, in which over 26 million people took to the street in protest of the killing, and which was one of the largest uprisings in American history, calls on us to examine past radical movements that came before it,” she observed.

This is not a new phenomenon in U.S. history, as people of color and workers have always “presented major indistinct opposition to the status quo,” she added. What happened last year, according to Alagraa, is that the movement gained global attention, pushing against narratives of white supremacy and calling for the establishment of racial justice.

Alagraa also mentioned the importance of identifying pitfalls in past movements and how we should strive to break from these drawbacks in our current moment.

She highlights that the 1960s was a time of opportunity for the intellectual movement of the Black tradition. In the wake of this political activism, however, Alagraa explains that academics and intellectuals failed to successfully emancipate their thinking from the “the grips of Western episteme.”

“Settling into institutions and turning away from the radical statements and utterances that gave rise to these intellectual movements signaled the death knell of this moment,” she added, quoting Sylvia Winter.

She also listed the lessons to be learned from past movements and how we can consolidate our solidarity to confront fascism and modern forms of oppression and discrimination.

Alagraa then went on to explain what Sylvia Winter proposes in her writing as a way to remedy these predicaments. Winter’s assertion is that we should move collectively beyond Western definitions and preoccupation with a man towards “a humanism that is made to the measure of the world.”

Alagraa explained that Winter advocates here, for a dimension of the humane that renders freedom possible. She further explained that “the transmission of stories about who we are” is what makes this possible.

Alagraa added that language through poetry is a way to propel us into the third event of liberation and expression.

“Making art has always been our way of making a break from the governing texts of our society,” she added.

In the second part of the panel, an attendee asked Alagraa about her personal experience growing up in Qatar and moving across countries, particularly in the Middle East. Alagraa responded that this experience actually helped her better understand the world around her and added an additional layer of complexity to her identity.

“You realize that, from a very small place, you can really understand the whole world,” she added.

She also explained that her Sudanese Muslim heritage helped her understand the way the West had been dealing with Islam, not just on a religious basis but also on “on the basis of repressing Black struggle.”

“That is something that I know because of who I am and my own experiences,” she explained.

Another attendee asked Alagraa how to correct the academic misconception that non-Black academics are not supposed to study the Black radical tradition as a sign of solidarity.

Alagraa responded that this compartmentalization did not stem from the emergence of the Black radical tradition, and in fact, that Black radicals like Aime Cesaire and Frantz Fanon were reading Marx, Lenin and Mao, not just Black intellectuals.

“This was ordinary in the past and, for some reason, in the present, there has been a problem with the way that these radicals have been transmitted. Now it seems as though we have to fight against this isolation,” she said.

It is especially important to move beyond this and to immerse oneself in as many bodies of literature, while also recognizing one’s place and particularity, she explained.

“So it is possible to trade with the other without losing oneself, and this is precisely what Black radicals did; they didn’t lose themselves or their attention to their own experiences, but they necessarily traded with others, intellectually,” she concluded.