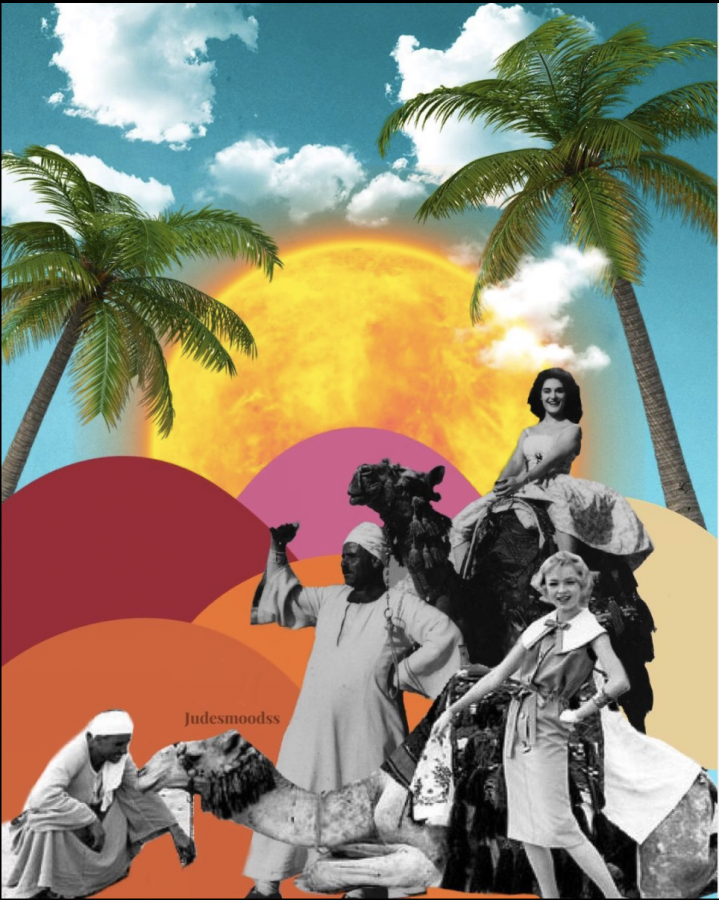 Have you ever wondered what your favorite icons would look like if they were from your country? Would they act differently or wear your national dress? Imagine Bernie Sanders smoking Shisha or Marilyn Monroe wearing an Abaya.

Arab artists are bringing this to reality with a little bit of color and the power of the internet. The fusion of Arab and Western pop culture is known as Arabic pop art, and it’s leaving its mark all over the world.

In essence, pop art revolves around the creation of pieces that are imaginative interpretations of famous social and political events with pop culture. A pop art piece could be a collage of several different art pieces that come together to make a statement or it could be an already existing art piece that has been reused to be more contextually relevant. “When you look at Arabic pop art, you see that people do not use words rather, they use art to center their own culture, the global South and the Middle Eastern and North African region,” said Hadeel Eltayab, associate curator at the Media Majlis at Northwestern University in Qatar.

The global pop art movement began during the 1950s and introduced famous pop artists like Andy Warhol and Richard Hamilton. In 1965, one of the first pop art exhibitions was held in Tehran at Borghese Gallery. It was around the late 1990s and early 2000s when the Arab region welcomed artists like Hassan Hajjaj and Rana Salam, who used Warhol’s techniques of pop art but made them relevant to Arab culture. Although the mainstream Arabic pop art movement is thought to be brought by the Arab Spring, it had been simmering through the region for decades prior. Today young Arab artists offer their interpretations of politics, culture and nationhood in a whimsical and sometimes satirical manner.

In January 2020, NU-Q’s Media Majlis organized the exhibition From Visionaries to Vloggers: media revolutions in the Middle East. One of the concepts highlighted was the rise of Arab pop art through social media. “One of the most important aspects for us was to show for how long people have been doing this, in terms of subverting narratives and in some cases, creating satirical narratives during the Arab uprisings that occurred from 2010 to 2011,” said Eltayab.

According to Abdelqader Hajjaj, a 25-year-old Syrian based in Norway who manages a well-known pop-art page on Instagram, collages and photo manipulation are two of many techniques pop artists use to communicate with their audience. Hajjaj’s Instagram page, called Arabic.pop.art, has more than 284,000 followers worldwide and features collages, illustrations and graphic designs by several independent Arab artists. Through this page, Hajjaj has created a space that brings forth aspiring Arab artists and raises awareness about issues in the Arab region. “Personally, I consider myself part of the Arab Spring generation, and I think I have to serve the cause through this page,” said Hajjaj.

The piece above shows a woman in traditional Arab clothing sitting over the city of Jeddah waiting for something. According to Hajjaj, the pieces he features are open to interpretation, and it’s up to the viewer to determine what exactly the woman is waiting for. The freedom to post art pieces on social media, Instagram specifically, has given both the audience and creators a chance to capture the Arab world through a different lens. “Collaging is a way that they can take back control, and it is taking existing images and reprinting it, reproducing it and creating a new narrative,” said Eltayeb.

Jude Al Dawudi, a 20-year-old Palestinian-Jordanian, has used the reconstruction and reclamation of narratives in her art to represent the Middle East and North Africa. “You always see these things in the Middle East, but you never really think about what goes on behind that. The main inspiration behind my work is Arabic tradition and culture because there’s so much to talk about, things like hospitality and the history of our region,” said Al Dawudi.

According to Al Dawudi, mainstream media’s portrayal of the Middle East mainly revolves around terrorism, so her art serves as a way to counter that narrative and represent the intricacies of Arab culture. Al Dawudi’s artwork above quite simply says it’s important to have a good time. The four Arab men standing together and enjoying corn is meant to highlight the joy of simpler things and the importance of togetherness. Her budding art blog Judesmoodss grew as Al Dawudi moved to Canada to pursue her undergraduate degree. For Al Dawudi, living in a foreign setting brought light to the stereotypes attached to Arab people. “I always had these comments coming at me left, right and center. Oh, you’re Arab. You’re probably filthy rich. Oh, you’re Arab. Did you go to school on camels? What’s it like living in a desert?” she said.

Pop art has helped her to create pieces that showcase aspects of the Arab world that is greatly unknown to the Western world, Dawudi added. Her art revolves around Arab people in their day-to-day lives but with elements that she said her followers find fascinating. “Whether it’s Saudi Arabia, Jordan or Egypt, no matter how different we are, we all can be victims to misconceptions and prejudice,” Dawudi explained.

Al Dawudi’s artwork above shows regions that are presumed to be polar opposites: the Arab world and the Western world. Vibrant colors, palm trees and the bright sun are elements that contrast each other but when looked at as a whole conveys a strong narrative. Seeing women in Western clothes enjoying a camel ride is quite simplistic, but it brings people from two different worlds together, showing how everyone is welcome in the Arab world to celebrate Arab hospitality.

The accessibility of social media and editing tools has given independent artists a level playing field when it comes to voicing their opinions, according to Eltayab. “The proliferation of tools like Photoshop have democratized art a lot…people are very aware of how to use these tools…they can create lots of different things to respond to things that are happening in the world,” he said.

By bringing awareness to pressing issues, pop art has been a way to inform audiences about Arab causes in a unique manner. Like Al Dawudi and Hajjaj, Rijan Amro has been using pop art to showcase Palestinian culture. It can be said that Arabic pop art has helped to reconstruct Arab identity in mainstream media not only for audiences but for their creators as well. “Finding beauty behind the madness is the most important thing. And just finding positivity after every negative interaction or experience…I truly believe that the Middle East will rise from the political unsteadiness eventually,” said Al Dawudi.

The 23-year-old Palestinian graphic designer and photographer creates pieces on Palestine in order to present the country through an alternative perspective. “Every time I visited Palestine, I would see the art galleries, orchestras, parties and the joy that the Palestinian people create for themselves during such a dreadful time and felt that it needed to be shared with the world,” said Amro.

She chooses to focus on Palestine’s art, culture, poetry, and music because, in the midst of political unrest, people have forgotten the essence of Palestine, Amro said. Her image on the left above features the old city of Yaffa, which is known for its oranges, and simultaneously shows unity and timelessness behind the woman. Amro’s second piece, “Jerusalem’s skyline,” presents a Palestinian woman wearing a traditional thawb beautifully placed in front of Jerusalem. Amro’s art aims to depict Palestine’s beauty and valued traditions that are often hazed out by the mainstream media coverage.

“I like to incorporate famous Palestinian poets and artists like Nabil Anani, Ismail Shammout, Suliman Mansour, and Mahmoud Darwish,” she added.

Many artists’ work centers around politics. For example, Al Dawudi, who repurposes archival photos with bright colors and scenery from the Arab region, uses her platform to inform her followers about the political tensions within the region as well. The Arabic in the image above translates to “There is no replacement of Palestine but Heaven,” and she created this piece to bring attention to Palestine’s political unrest. Her intent is to ensure that the audience remembers the importance of Palestinian resistance and why it is important to preserve Palestinian culture.

“People have found different ways to be able to get their idea of truth out and even to show multiple truths in their constructions of a narrative,” said Eltayab.

Collaging and repurposing archival photos can be an impactful way to present art. However, independent pop artists oftentimes fear censorship regulation and copyright violation.  “While preparing for the Visionaries to Vloggers exhibition, most artists we worked with did not realize they may have violated copyright laws, so it gets complicated. But in the digital space, I think it’s a little bit more free,” said Eltayeb

Instances where artists repurpose and feature existing art without copyrights or the previous artist’s consent become a serious issue on social media. In order to tackle the challenge and avoid legal action, artists usually use watermarks on their work or remove the piece from their accounts entirely. “I get some complaints where people accuse me of featuring art that has violated copyright laws, so I usually remove the piece and inform the artist using my platform,” said Hajjaj.

Copyright laws in the digital space should not pose a difficulty as long as the art is not for profit, Eltayeb said. However, one of the other challenges pop artists in the Middle Eastern and North African region face is. Although the digital space can be relatively forgiving, pop artists tend to take political and religious sensitivities into account. “There are artists who come and create interesting pieces that critique society, although it’s working within a certain realm of respectability,” Eltayeb added.

According to the Eltayeb “respectability politics plays an integral role in the Middle Eastern and North African region.” This particularly came into play when Arabic pop art was at the forefront of the Arab spring. As independent art was used as a symbol of resistance and political transformation, artists would often use famous political leaders as their focal point. Oftentimes, those pieces would be interpreted as derogatory towards the political leaders, which made artists prone to greater censorship and political scrutiny.

Even though censorship and copyright regulations might serve as long standing challenges, Arab representation and raising awareness about Arab causes has been a priority for rising pop artists.

“I survived Syria, so I don’t think I am scared or hesitant about posting anything,” said Hajjaj.

For Hajjaj, pop art is a way to gather attention for the Arab spring and women empowerment movements throughout the Arab region. For Al Dawudi, pop art serves as a medium to showcase Arab people detached from stereotypical representations and in a setting that embraces Arab culture. And for Amro, pop art is tool to depict Palestine’s long-lasting legacy and beauty that is seldom spoken about in Western media. Inevitably, Arabic pop art has revolutionized artistic expression and its relationship with pop culture. Rising artists continue to make their mark in the digital space and educate their followers about the complexities of the Arab world.

“I want my art to remain with people,” Al Dawudi said. “I want it to stay with them.”