Vernacular Video and Transnational Resistance in the Arab Uprising 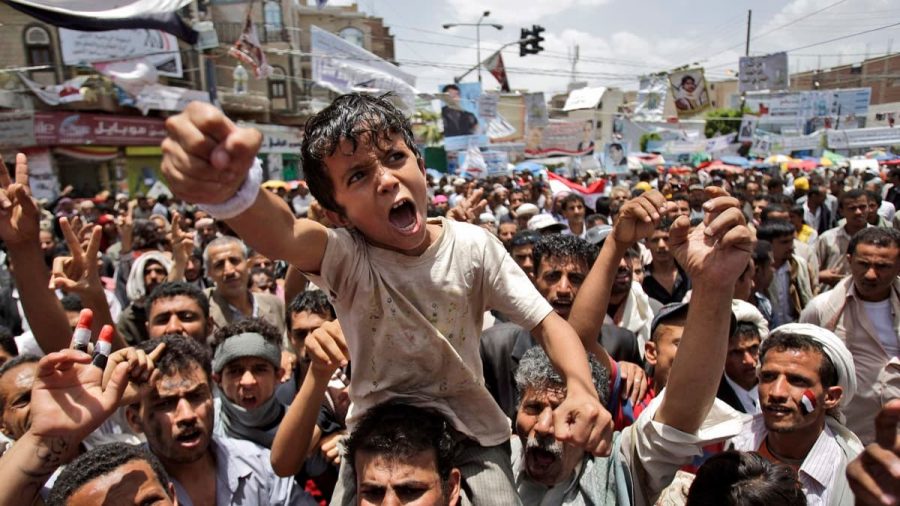 Video was used as a decentralized and vernacular medium in the Arab Spring uprisings, which allowed marginalized voices to travel across national boundaries and express local struggles, said Peter Snowdon, director of the documentary “The Uprising,” during a discussion held by the Media Majlis on Feb.2.

The discussion, moderated by Rana Kazkaz, an assistant professor in residence at NUQ, was titled Telling the Narrative: Behind the Scenes of The Uprising and accompanied the museum’s current exhibition, Breaking News? how the smartphone changed journalism.

“The Uprising” is a feature length documentary directed by Snowdon and produced by Bruno Tracq that was released in 2014. The film is a multi-camera, first-person perspective composed of user generated videos from citizens of Tunisia, Egypt, Bahrain, Libya, Syria and Yemen.

Snowdon’s documentary follows a seven-day structure, bookended with footage of a storm.

“The Uprising” highlights a chaotic and emotional period in the history of Arab nations from the perspective of its people. “I didn’t want to make a film that they felt betrayed by. I went back to Egypt and showed the film to the people to get their feedback,” said Snowdon.

The documentary aims at inviting the viewer to watch these user-generated videos together and provide a platform for them, rather than constructing a narrative and meaning. “For me, it’s a way to watch these videos together,” he said. Snowdon does not see the film story as a “straight jacket,” but rather “having a life of its own and making its own meaning in the large arc of the story.”

Temporality and spatiality hold symbolic significance in “The Uprising.” “The film has an open-ending. For me, that means that it ends in the present,” said Snowdon. Space is transnationally constructed throughout the movie, he explained. “Imagine a world where you throw a stone in Syria and it ends in a street in Tunis.”

“The Uprising” communicates temporality through a disruptive chronology. “We moved away from the strict chronological reality,” said Snowdon, adding that it highlights that the Arab Spring “is an event which is not limited by geographical boundaries.”

Snowdon said he stressed the importance of the human spirit in the film instead of a constant focus on violence. Humor, creativity, and the desire for community in some of the videos showcases this human spirit. “Humor in the face of extreme adversity seems to me an admirable human trait,” he said.

Unlike most vloggers and most of the user-generated content in America, people in videos “don’t film themselves in their own homes…most of them are in the streets.” The conscious choice to only film in the streets “adds another dimension to the film,” Snowdon said.

The citizen generated videos included in “The Uprising” are not filmed with higher resolutions nor do they have built-in camera stabilizers. “The body of the people holding the cameras is in the footage,” he added.

In an effort to do justice to the videos, Snowdon wrote an accompanying book, “The People Are Not an Image: Vernacular Video After the Arab Spring,” in which he examines the videos in a greater depth. “Cutting the shots is the worst thing about the film; the book was a way of redeeming myself so that I can write about an individual video for 20 pages,” he said.

Snowdon links the Arab uprising as portrayed in the videos to other forms of resistance across the globe, such as in Hong Kong. “There is a transnational repertoire of street fighting,” he said when speaking about the transnational nature of the videos. “This is an event which is not limited by geographical boundaries.”