The Hidden Truth About Eating Disorders 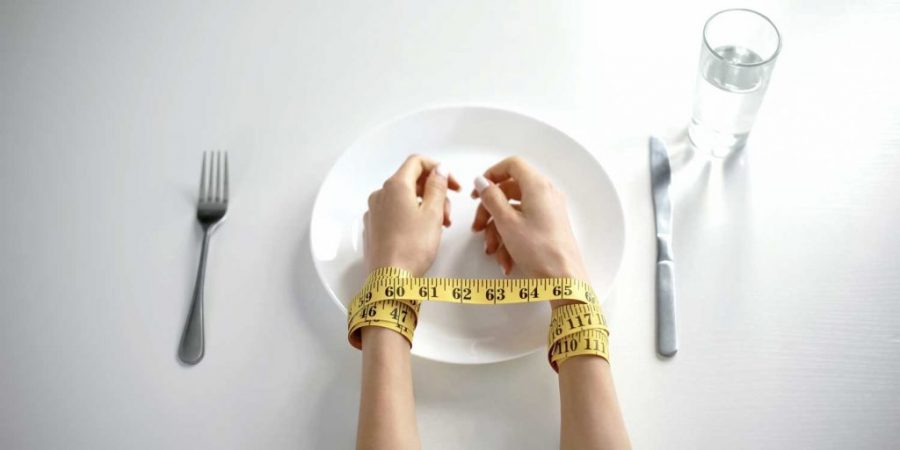 “Have you eaten anything today?

Throughout the past few years, I’ve heard that question often, to the point where typing it out, ironically enough, makes me feel sick to my stomach. My answer has always been an insistent “yes, of course,” almost always preceded by a scoff and followed by a dismissive eye-roll. Truthfully though, I cannot remember the last time I had a proper meal. More specifically, I can’t remember the last time I ate anything without subsequently, for lack of a better term, putting myself through hell for it: without hurting myself physically, mentally, emotionally, or simply starving myself to make up for what I had consumed. My body is a prison and my mind my captor—that is the best way I can describe to you what it is like to silently suffer through an eating disorder.

Approximately 70 million people across the globe suffer from an eating disorder, which means that many people have probably met someone suffering from one silently and never even realized it. The problem, however, is that there is still a great deal of ignorance surrounding EDs and their symptoms.

I was diagnosed with anorexia nervosa during my final years of high school. To say that the journey to recovery has been difficult would be an understatement. Although I was losing weight at an unhealthily rapid rate and showed many concerning signs of being mentally ill, I was not able to get the help I needed until it was almost too late. This was largely because there was, and continues to be, a severe lack of information surrounding eating disorders (EDs), especially in regions such as the Middle East and South Asia. The people around me were not always able to decipher the signs of this illness. As a result, I too was unable to come to terms with the fact that I was hurting myself.
Eating Disorders: What Are They?
In a world full of capitalism-induced eating habits that prove to be detrimental to our health and the perpetuation of dangerous body image ideals by the media, it has become trickier than ever to understand what actually qualifies as an eating disorder. We are constantly being brainwashed into believing that eating less or trying out absurd new diets is completely normal, if not essential, to fitting in and prospering in today’s society. In fact, according to the Journal of Psychiatric Research 1995, a whopping 91% of women who were surveyed on a college campus had tried to control their weight by dieting, and 22% of them dieted “often” or all the time . This may make it difficult to differentiate between someone on a diet and someone suffering from an eating disorder, to the layperson’s eyes.

According to Dr. Nasim Chaudhry, a professor of psychiatry with a doctorate in research from Manchester University, “an eating disorder is a mental health condition where a person has issues in terms of food intake and their perception of how much they eat and what they look like.” It’s much more than just wanting to lose a couple of pounds. People suffering from EDs

often take extreme measures to lose or maintain their weight, such as starving oneself, forcing oneself to throw up, and obsessively exercising past what is physically possible for an average person. ED patients also suffer from body dysmorphia, Chaudry explained. “Despite being skin and bones, they look ‘fat’ to themselves,” she said.
(MAJOR TRIGGER WARNING FOR SUICIDE, SELF HARM)
“I used to tell myself that if I was to ever reach a certain weight, I would kill myself,” said Nora Khatib, a freshman at Northwestern University in Qatar who was diagnosed with anorexia nervosa and bulimia.

Many of the measures she used to take to prevent herself from eating continue to haunt Khatib. She had trained herself to associate eating with pain: she would hurt herself before, after or while eating, the details of which are too graphic to be included here.

“ED is like a vicious cycle, once you get into it, it’s hard to get out. It seriously feels like…a nightmare. You are trapped in it and you lose control of yourself,” said Safae Daoudi, a freshman at NU-Q who was diagnosed with anorexia in high school. An eating disorder is like a “terrible addiction,” she added.
A Difficult Diagnosis
Despite the fact that behaviors associated with eating disorders can be considered dangerous, they are not always easy to spot. According to Chaudhary, eating disorders are one of the most difficult conditions to diagnose. “The individual[s] themselves are very reluctant to talk to anyone, it’s like a hidden thing. Their family will assume they’re eating because they’ll hide the food or immediately go to the bathroom and make themselves sick [once they are alone],” she said.

Chaudhary added that in South Asian and Arab cultures specifically, people do not recognize the severity of EDs because they attribute such behavior with being picky or fussy. “[They] don’t recognize how painful it is when someone starves themselves because it gives them some sense of control,” she said.

Worst of all, according to both Daoudi and Khatib, it becomes very easy to hide an ED. “When I would binge [eat], [my family] just assumed that I was having a meal, so it was pretty easy to hide that bulimic aspect of things,” said Khatib. She used to bring a loudspeaker to the bathroom and play music loudly so nobody would be able to hear when she was throwing up the food she had just eaten, Khatib added.
Getting Help and Helping out
The complicated nature of this illness can leave sufferers and their friends and family feeling helpless. So, how can you identify, approach and help a friend you suspect might be suffering from an ED?

It is first important to try and recognize if someone you know well is suffering from the illness, said Chaudhary. She stated that EDs are often associated with people who have experienced past trauma or have been diagnosed with a mental illness, such as post-traumatic stress disorder, obsessive compulsive disorder and depression. In addition, it would be easier to identify potential patients of an ED if people knew if their friends or family members also suffered from any of those illnesses, she said.

Paying attention to someone’s relationship with food can also be helpful. “[They may have] suddenly stopped eating, [they may] avoid talking about food or excessively talk about food, have lost a significant amount of weight but still express [that they] need to lose more,” said Chaudhary, listing out some basic warning signs that someone may be suffering from an ED.

Mahnoor Viqar, a freshman at the Lahore University of Management Sciences in Pakistan who has been a close friend of an ED patient, said she recognized ED symptoms in her friend by observing her eating habits and her weight fluctuations. “I noticed that she started skipping meals too often or eating very little, saying she’s not hungry and the thought of eating makes her want to throw up,” she explained.

Her friend would also complain of nausea whenever the subject of eating food came up, even though she had not eaten anything all day. She was always worrying about gaining weight every time she would eat something, Viqar said, adding, “I was worried but tried not to mention it too much unless she decided to open up about it herself.”

After identifying your friend or family member’s illness, the most important thing you can do is listen to them, acknowledge their concerns, and try to get them professional psychiatric help. “Be empathetic and [do not] be judgmental or presumptuous,” Chaudhary advised.

Daoudi said a sympathetic ear is very important when trying to navigate through an ED. “Listen to them and acknowledge their struggles. I would have liked to hear from someone who went through the same to avoid going through it myself,” she added.

The inability to cope with negative and unwanted emotions often acts as a trigger to EDs, according to Dr. Fatimah Isa, a professor of psychology in medicine at Weill Cornell Medicine-Qatar. Therefore, in the journey towards recovery “it is important that people recognize their emotions,” she said, adding that only after such emotions are accepted as a standard part of life can ED patients work to find coping mechanisms for their illness.
The Importance of Self-Realization: An ED Patient’s Perspective
Daoudi didn’t realize she needed help until she noticed her hair falling out. “I realized I took things too far, and I was determined to get my beautiful long hair back. I joined a group on Facebook called “No Period. Now What?” and healed from then on,” she said. The community Daoudi joined supported her and encouraged her to eat and restore balance to her body. She remembers the journey as “a long (one) that taught (her) a lot.”

Khatib, on the other hand, said she still struggles with truly accepting her illness as a problem. “I catch myself thinking that it’s normal behavior when it’s really not. Sometimes I’m toxic for myself.”

When asked to pinpoint a moment when she truly recognized that she was suffering from an eating disorder, she recalled when she was 14 and went down to the kitchen to eat some of her “safe” food.  Instead, she ended up passing out on the floor. “That’s when I knew that I had a problem: when I couldn’t do basic things like standing up or walking to the kitchen without falling over or passing out. It was honestly impossible to ignore it at that point,” she said.

As for me, personally, I deemed losing hair, fainting in public, extreme pain in my body and self-harm as “necessary sacrifices.” I would tell myself I deserved the pain—for what exactly, I still don’t know—and I would encourage myself to keep going no matter what others said. I had to be forced by my parents, who previously refused to even believe mental illnesses were real, to visit a psychiatrist. If I had not started taking antidepressants and receiving therapy at that point, losing any more weight would have been fatal. Knowing you have people around you who care about you can help too, though. To this day, the one thing that helps is when my friends distract me while I eat so I can get some energy in me after days of starving.
The Urgency of the Issue
As of now, anorexia nervosa has a fatality rate of 5.86 per 1,000 people: the highest death rate of any mental illness. This may be because of the damaging impact the illness has on a person’s physical well-being and health, or because many ED sufferers attempt suicide. Researchers have found that 24.9% of those with a history of anorexia, 31.4% of those with a history of bulimia, and 22.9% of those with a history of binge eating disorder had attempted suicide in their lifetime. These figures indicate the massive harmful impact EDs have on people worldwide. It is essential for us to realize that those close to us could be suffering from these illnesses. It’s time we start treating people’s feelings about their bodies with the seriousness it deserves. You never know if what you say or do could save someone’s life.

Dial 16000 to reach Qatar’s National Mental Health Helpline. If you’re a student and you think you are suffering from an Eating Disorder or another mental health condition, make an appointment with counseling services at NU-Q ([email protected]) or at QF Primary Health Care Center located in the HBKU Student Center. The QF Primary Health Care Center can also be reached at 4454 1244.