Fear, Ambiguity and Intimidation: A New Age of Media Censorship in Pakistan 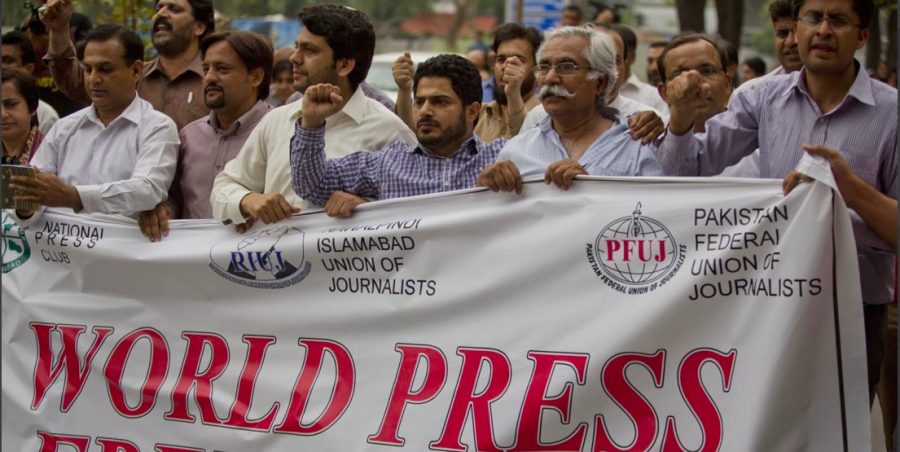 On 21 July, Matiullah Jan, a prominent Pakistani journalist, had just dropped his wife off at a women’s college when he was picked up by unidentified men in cars with police markings. According to CCTV footage, Jan was forcefully pulled into one of their cars. Not long after, unprecedented uproar erupted on social media from fellow journalists and human rights organizations such as Amnesty International and the Committee to Protect Journalists. Twelve hours later Jan was released––dropped off on the outskirts of Islamabad by his abductors. Many have pointed the finger towards the country’s security agencies, who have often been accused of carrying out such “enforced disappearances.”

Jan is one of many journalists who have been the target of abductions in Pakistan. The social media fury triggered by Jan’s disappearance called out this new era of censorship in Pakistan, one under the civilian government of the political party Pakistan Tehreek-e-Insaf, which has given the military and security forces a free hand in the regulation of the media.  As a result, journalists, faced with harsh media regulation and threats of violence, struggle to safely pursue their stories in the country.

Media censorship is not a new phenomenon in Pakistan. The country’s history of censorship can be traced back to the inception of its media industry, starting from laws put in place by military ruler General Zia-ul-Haq in 1979.

Under his rule, provincial governments were asked to directly implement pre-publication censorship through their administrations. Editors used to leave blank spaces in their newspapers to indicate that an article had been censored. Haq issued martial law regulations by which any material threatening the “integrity and security of Pakistan, morality and maintenance of public order or against the purpose of Martial Law” could not be published. Journalists were often prosecuted under these vague regulations.

The 18th Annual South Asia Press Freedom Report 2019-2020, however, found that many in Pakistan believe that censorship under the democratic government today is worse than under the decade of Haq’s dictatorial regime. Journalists state that censorship in the present-day has created an environment of fear, suppressing critical voices and blurring the lines that media personnel can and cannot cross in their reporting.

Pakistan ranks number 142 out of 180 countries on the World Press Freedom Index 2020. That is lower than India, South Sudan, Afghanistan, and Qatar. In the last 10 years alone, 35 journalists have been killed in service in Pakistan. Seventeen of these incidents occurred on assignment or due to crossfire; the remaining 18 were murders. According to the Pakistan Impunity Scorecard, seven journalists were murdered between 2018 and 2019. The problem with these killings, whether they occur on assignment or have been categorized as murders, is that they usually do not get prosecuted properly. Media experts say law enforcement does little to investigate these cases and none of them have reached a stage at which a court could reach a decision and a perpetrator charged. Pakistani journalists claim that these statistics show a pattern of structural censorship in the media, which has worked to stifle their voice.

According to the 2019 Human Rights Commission of Pakistan report, the recent governmental cuts in media spending have acted as a tool for censorship as well, leading to thousands of media personnel losing their jobs and multiple media houses being shut down as advertising revenue from the government decreased exponentially.

In 2019, a year into the PTI government’s tenure, Reporters Without Borders wrote an open letter to Prime Minister Imran Khan that called out media censorship and violence against journalists. The letter mentioned that advertising revenue had been completely cut from Dawn Newspaper, the leading English newspaper in Pakistan, as a result of their reporting on the state’s activities. This “economic harassment” has forced Dawn and other dissenting media to self-censor.

Self-censorship is manifested through the fear of crossing certain “red-lines,” said Amber Rahim Shamsi, a multimedia journalist who formerly hosted a political talk show on Samaa TV. “There are things we cannot directly talk about, the military—its policies and political affairs is the main one— and to a lesser extent it is also religious parties and even some powerful businessmen,” she explained.

Intimidation and Fear: The Plight of a Pakistani Journalist

This self-censorship is not unwarranted as it comes from a very genuine fear of backlash when reporting or even commenting on stories involving the state and military.

Jan was supposed to appear before a judge the day after his abduction in a Contempt of Court case for his tweets criticizing a verdict involving one of the country’s top judges. He was released a few hours before the hearing.

“They were people in police cars, [wearing] police uniforms, they were duly armed and pushed me into the police car,” said Jan, describing his abduction. “They tortured me physically and mentally. They took the names of my children.”

According to Jan, his abductors asked him “why do you do these things?” But they never explicitly explained what they were referring to.

Jan said the public’s reaction on social media had a lot to do with his release. “I think they [his abductors] did not expect the reaction from the public,” he stated. After seeing the public outcry, his abductors pretended as if they had picked up the wrong person by accident and then let him go, he added.

Jan was released 12 hours after his abduction. He was driven away from the site he was kept at and dropped off around 45 kilometers outside of Islamabad. From there he walked to a road and called his brother after asking to use a stranger’s phone.

His vocal criticism of the state and the military has forced him to move to a digital platform to continue his journalism. This is because, Jan said, nobody is willing to employ someone who has been labelled as “anti-state.”

Jan’s incident, however, does not exist in isolation. “We only hear about some disappearances, those that manage to get some attention,” said Omar Waraich, the deputy South-Asia director of Amnesty International. According to Waraich, since Jan is a prominent journalist based in Pakistan’s capital city with hundreds of thousands of followers on social media, the way Jan’s case was treated is much different than how most journalism-related abductions are treated in the country.

“People know Mati [Ullah Jan] and are personally affected if something happens to him. That immediately humanizes him,” Wariach said, adding that this privilege is not one that is enjoyed by most people who forcibly disappear. Journalists hailing from remote provinces and regions in Pakistan, such as Balochistan, Khyber Pakhtunkhwa and the former Tribal Areas, do not get the same kind of attention when they go missing.

“It’s not just about connections,” Kiyya Baloch, a well-known Balochi journalist, stated. Baloch added that Balochistan has stories that are considered “sensitive” by the state, and journalists that report on them face greater danger.

In Balochistan, journalists fear for their life, as many of those working from the province have been known to be the target of murders, which often go unclaimed. Just this March, Sajid Hussain, a Baloch journalist who was granted asylum in Sweden after facing threats of violence, went missing. Hussain was reported dead in May. It is still unclear who was responsible for his death.

The Balochistan Union of Journalists observes a Journalists Martyrdom Day every year to honor the lives of journalists who have been killed in service.

Pakistani Journalism and its Red Lines

While at the extreme end of the spectrum Pakistani journalists live in the constant fear for their safety, they also have to face other hurdles. Journalists complain of lay-offs, their editors being pressured to take down stories related to state-deemed sensitive topics (including on stories about enforced disappearances), their interviews being censored, and being denied access to sources.

“I’ve had interviews pulled off after they went live, I’ve been asked to ‘tone down’ my criticism of the government, I’ve been branded as “anti-establishment” and what eventually happened was I lost my job, ” Shamsi said about her experience as the anchor of a news talk show over the past few months.

Shamsi said news channels do not directly tell journalists that they have been told by other powers, such as the state, to fire them. “They blame the ratings, economic problems, but there is a common pattern with the anchors that have been laid off recently. They were much more critical of the PTI government or were considered to be anti-establishment,” she said.

In addition, Wariach said the new extent of censorship over the past decade has meant that journalists working for English, non-mainstream news organizations are not safe either. “They used to leave English papers alone,” he lamented.

“In the past it was quite clear what you could do and where the red lines were. These days those red lines are always shifting, ” Hanif added.

Female journalists in Pakistan find it even more difficult to report in Pakistan’s media landscape than their male counterparts. Facing harassment and trolling on social media has become a big part of their lives as journalists, Shamsi said.

“It’s not just anonymous accounts that are abusing us, it’s government officials who publicly humiliate us,” said Benazir Shah, a journalist who received the 2013 U.N. Correspondents Association Award and currently works for Geo News. According to Shah, when government officials normalize speaking to female journalists in such ways, anonymous troll accounts follow suit. One example of this was when in August, Shahbaz Gill, the special assistant to the prime minister on political communication, launched a series of attacks on Shah and journalist Mehmal Sarfraz on Twitter. Gill hurled abuses at them and questioned their integrity as journalists. His tweets triggered further online abuse against the two journalists.

According to Shamsi, social media troll attacks are often sexual in nature, including death and rape threats, and even involve the tampering of journalists’ pictures.

Shamsi and Shah are two of the pioneers of the “Attacks Won’t Silence Us ” campaign, a social media movement for female journalists in Pakistan to stand up against such online harassment. The campaign has gained momentum, with 144 female journalists signing their statement, which includes a list of demands for the government to protect female journalists from “vile and vicious attacks.”

Shah said the government’s response to this movement was “disappointing,” adding that while the National Assembly’s Standing Committee on Human Rights invited the journalists to express their concerns, they failed to address the root of the problem: social media accounts that belong to government officials. Instead, the committee only spoke about anonymous troll accounts.

Human rights organizations, such as the United Nations and Amnesty International, have often urged the Pakistani government to take greater steps to ensure the safety and the rights of the country’s journalists. The government, however, has not yet acted on these recommendations, said Warraich.

The state and the military maintain that Pakistan has a free press. In fact, in 2019 Prime Minister Imran Khan claimed that the Pakistani media is not just free but often gets “out of control.”

The reality that journalists describe, however, is very different. They claim that stifling their own voices is letting the state be free of accountability. “We are not activists, we are journalists trying to do our job which is, to tell the truth,” said Jan.

According to Jan, the international community of journalists need to help reporters in Pakistan and amplify their voices. “We journalists give a voice to the voiceless, but if we become voiceless…who will voice out the concerns for the voiceless?”