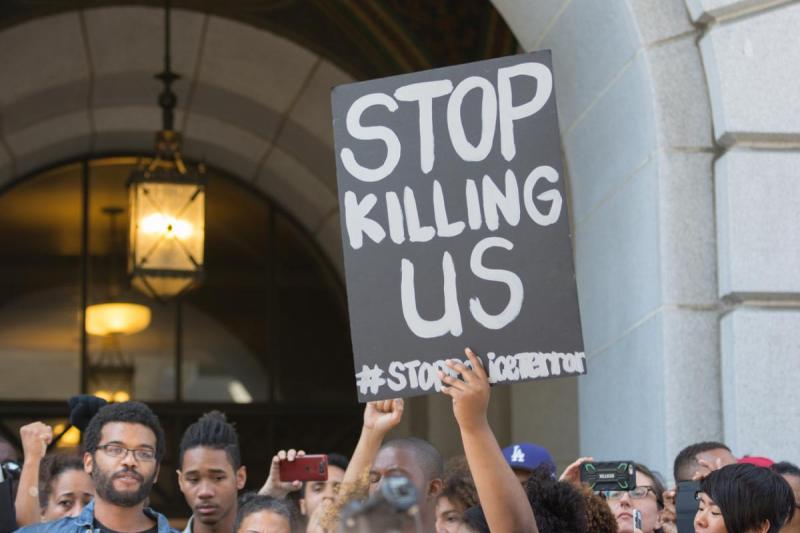 The African Students Association at Northwestern University in Qatar released a statement yesterday demanding that faculty speak out about President Morton Schapiro’s comments on protests against the Northwestern police department in Evanston.

“This is in reaction to the silence of the NU-Q administration,” said Hatim Rachdi, president of the ASA. Rachdi is also a staff reporter for The Daily Q.

The ASA is demanding that the NU-Q academic programs and committees addressed in the statement issue a solidarity statement with student protesters in Evanston and condemn the “highly insensitive views shared by President Schapiro in his email.”

Many students in Evanston have been calling for the divestment and abolition of the Northwestern University Police.

On the night of Oct. 17, a masked crowd of activists and students marched through Evanston. Protestors painted abolitionist messaging on buildings, including the Whole Foods Market, owned by Amazon billionaire Jeff Bezos. A storefront window was also smashed, according to the Daily Northwestern. The march concluded in front of President Schapiro’s house, which was being guarded by NU and Evanston police. He did not make an appearance at any of the protests, which began on Oct. 12 and had at that point not talked to organizers.

In response to the events, Schapiro sent out an email to the NU community on Oct. 19. He wrote, “I condemn, in the strongest possible terms, the overstepping of the protesters. They have no right to menace members of our academic and surrounding communities.”

His comments in the email were deemed derogatory towards the student protests, the protesters and their demands, according to the ASA statement and others from several departments and programs on the Evanston campus.

“They care more about private property than human lives. There is no level of property destruction that we can do that is more violent than the cops existing,” said a student in a report by the Daily Northwestern.

In their statement, ASA leadership wrote, “The Black community at NU-Q has particularly been afflicted with such targeted comments made by the president” and that the ASA “does not stand with this color-blind, silencing, and demeaning response” from Schapiro.

“President Schapiro does not only represent NU-E, he represents NU-Q as well, and we feel that the statement he made does not represent our community. It’s our responsibility to raise our voices,” Rachdi told The Daily Q.

He added that he thinks NU-Q faculty are probably aware of the ongoing protests in Evanston and expressed dismay at their silence. NU-Q has taken some action to educate against anti-Blackness, such as the creation of the Faculty Working Group on Race, he acknowledged. However, Rachdi said he wants to see a more active response from faculty and the administration in response to issues in the university community.

On June 6, the ASA released a statement highlighting the protests against racial injustice and police brutality erupting throughout the U.S. It stated that the student organization was “appalled and saddened…at NU-Q’s decision to remain silent about the situation.” The previous Acting Dean of NU-Q Craig Lamay subsequently sent a statement to the NU-Q community on June 8 addressing and acknowledging anti-Blackness and racism and outlining steps to combat it.

“It’s really upsetting that the ASA has been put in this position once again. The lack of condemnation of President Schapiro’s remarks makes us wonder if these initiatives are surface level. The NU-Q community needs to do better for its Black students to feel safe and supported,” said Khadija Islow, vice president of the ASA.

ASA’s most recent statement claims that in a student town hall on Nov. 11, NU-Q Dean Marwan Kraidy expressed that he “does not have the academic freedom” to issue a statement but that individual departments within NU-Q, as on the Evanston campus, do. Rachdi said that after receiving this “insufficient response” from the dean and consulting with NU Community not Cops, he drafted the most recent ASA statement.

However, in a follow-up email sent on Nov. 24 to the ASA, Kraidy clarified that his comments had been misunderstood.

“I did not say that I lacked the academic freedom to comment on President Schapiro’s letter. I have every right to do so – as does every member of the community. I said that while we all have the right to speak freely, we also have the right to deliver our message through different channels, and the right not to speak. I also said that I have not impeded, neither will I hamper any NU-Q individuals’ or groups’ academic freedom,” he wrote.

Kraidy also reiterated that he “sees, hears, and deeply empathizes with African and Black students” and that “NU-Q remains committed to supporting a diverse global community.” He mentioned initiatives that he has undertaken since taking office in June, such as creating the Institutional Equity Working Group, actively working to establish an Africana Studies Joint Minor with GU-Q, integrating race and justice in discussion of faculty recruitment and more.

He added that “words can be ineffective in addressing systemic obstacles to human fulfillment and the pain these obstacles cause.” However, he supports individual groups, such as the ASA, to speak out on issues of concern to them.

“While our role is to support and encourage honest, transparent communication among and between our shared communities, we will, as a school, determine how we communicate school-wide issues with each other, while encouraging community members and groups to speak freely for themselves,” he wrote. “More importantly, we will continue the urgent and necessary work to develop concrete institutional initiatives and mechanisms that entrench anti-discriminatory and anti-racist values and practices in everything we do.”

Likewise, Director of Student Affairs Keelie Sorel told The Daily Q in an email that the university continues to work towards addressing concerns raised by students and ensuring an environment where students can learn and engage freely. This has so far included increasing meaningful dialogue around diversity and inclusion, diversifying the candidate pool for the new NU-Q therapist position and developing a Report a Concern webpage to simplify reporting processes.

In Evanston, Schapiro has pledged his commitment to social justice and expressed support for implementing changes to make Northwestern more inclusive for Black people and promote diversity. He has also been open to coordinating dialogue with students on issues of concern such as the NU police budget.

A new chief diversity officer was appointed and so were action leaders. Other larger institutional responses to race issues remain in the works. However, in response to the protests, Schapiro said the university has no intention of defunding the university police. As a result, student protests are still ongoing in Evanston.

“Our fear is that the administration is not really going to pay attention to these things anymore, even if we do issue a statement. We hope we will have a community that stands up for each other,” said Rachdi.

Disclaimer: The author is a member of the ASA. Managing Editor Nadege Bizimungu, previous president of the ASA, was not involved in the writing or editing of this piece. Current ASA president Hatim Rachdi is a staff reporter for The Daily Q.