Revisiting the 1994 Jordan-Israel Treaty: Most Promises Unfulfilled for Jordan 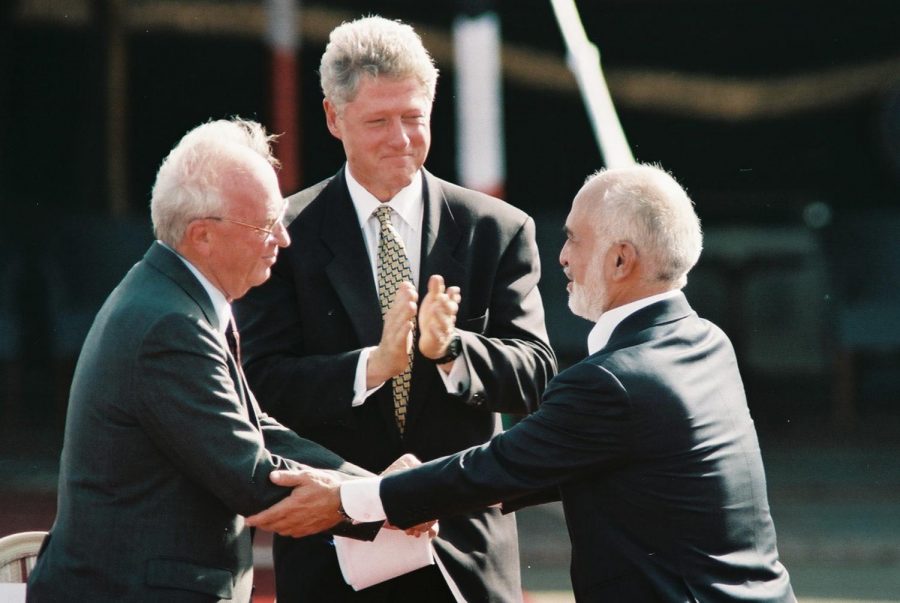 The Jordan-Israel treaty, signed 26 years ago on Oct. 26, 1994, promised Jordan great benefits and mutual prosperity for both Israel and Jordan. However, according to activists like Azzam Tamimi and political analysts like Lamis Andoni, along with the Jordanian public, the treaty with Israel affected Jordan negatively on various fronts.

Tamimi has said in the past that the peace deal with Israel was bad for Jordan and that it has not worked in favor of the country or its people, and Andoni has said that the deal was pushed by the United States, against the interest of the Jordanians, and forced them to accept the occupation of Palestinian lands.

“The treaty was rushed to be signed by Israel and Jordan right after the signing of Oslo Agreements in Sep. 1993. It reflected a shared Israeli/Jordanian interest to exploit the opportunity that was seen at the time,” said Khaled Al-Hroub, a liberal arts professor at Northwestern University in Qatar, who specializes in the Arab-Israeli conflict.

The agreement, also referred to as the Wadi Araba treaty, contained 30 articles, six maps, and five annexes, which addressed boundary demarcations for the Jordan and Yarmouk Rivers, the Dead Sea, Wadi Araba, and the Gulf of Aqaba. It mostly covered issues about international boundaries, security, water, passage, refugees and displaced people, and the normalization of relations between Jordan and Israel.

“Signing the treaty as the second Arab country was significant as Jordan had the longest line of confrontation with the Israeli entity. It also possessed the Hashemite guardianship of the Al-Aqsa Mosque and possessed a large number of Palestinian refugees who had Jordanian nationalities, or refugees residing on Jordanian lands,” said Bader Nasser, former chairman of the Committee of Engineers for Jerusalem and Palestine, which restores Palestinian houses and supports the Palestinian resistance movement. “This treaty was an event that the Israeli occupation was searching for in order to show that it is able to extend and normalize relations with Arab countries.”

However, one aspect that resulted in significant negative consequences for Palestinians was the agreed security cooperation between Jordan and Israel.

“The security cooperation affected Palestinian movements and their resistance. This resistance was depicted as ‘terrorism’ and both parties [Jordan and Israeli occupation] exchanged information and data in this area. As Jordan was not threatened by these movements, Israel was the winner of this cooperation and the Palestinians were the losers,” said Al-Hroub.

Although the treaty promised Jordan large benefits and mutual prosperity, in reality, most of the clauses in the treaty that were directed to benefit Jordan were not implemented. One example is the issue of water. According to the agreement, Israel was to transfer 55 million square meters of water to Jordan annually. However, up until last year, 35 million square meters have only been transferred.

“Nothing of that was materialized, and Jordan’s economy continued to sink since then, with the foreign debt multiplying many folds,” said Al-Hroub.

One of Jordan’s main reasons for signing the treaty was because of the stated economic benefits that the country would receive. Although the United States wrote off three billion dollars from Jordan’s foreign debt following the signing of the agreement, Jordan’s economic situation has worsened along the years due various factors, such as the intake of refugees and increasing government debt.

“The treaty created a large deficit in the trade balance in favor of the Israeli occupation as the imports from the Israeli entity exceeds the Jordanian exports. There is a decrease in the amount of Jordan’s share of water with accordance to the agreement signed with the occupation. In addition, Jordan leased lands to the occupation, Baqoura and Al-Ghamr, for a very long period, 25 years, which did not benefit Jordan at all,” said Nasser.

Although the Baqoura and Al-Ghamar deal ended in October 2019 and Jordanian authorities declared that it will not be renewed, Jordan is still committed to its treaty with Israel despite its ongoing strain on the country’s economy, resources, and land.

Nasser added that Israel claimed that Israeli tourism would increase greatly in Jordan following the treaty; however, in reality, Israeli tourists visit Jordan very cheaply, which does little to help the country’s struggling tourism sector.

When it comes to the consequences of the treaty, Al-Hroub said, “Israel used that treaty to reflect an international image about itself that it’s an ordinary country that lives in peace with its neighbors, and thus opening up more spaces for economic and security cooperation with the world, but Jordan was left with little benefit.”

The drawback for Jordan exists to this day, as new deals are being formed which are costing Jordan large amounts, such as the gas deal signed in 2016 that is set to cost the country a total of 10 billion dollars across 15 years, said Nasser.

The treaty was received with resentment among the Jordanian public, Nasser added, despite the official signing of the agreement. “There was a clear and strong opposition to this treaty and complete refusal regarding normalization with the Zionist occupation in Jordan,” he said. Polls have shown that the treaty is very unpopular among the Jordanian public, who want to see it terminated. Additionally, many Jordanians have taken to the streets to protest the treaty and shut down the Israeli embassy in Jordan.

Twenty-six years later, the Wadi Araba treaty and the normalization efforts between Jordan and Israel are still widely rejected by the Jordanian public. However, there are no signs that Jordan plans to terminate the agreement any time soon.