Fire as a Tool of Communication 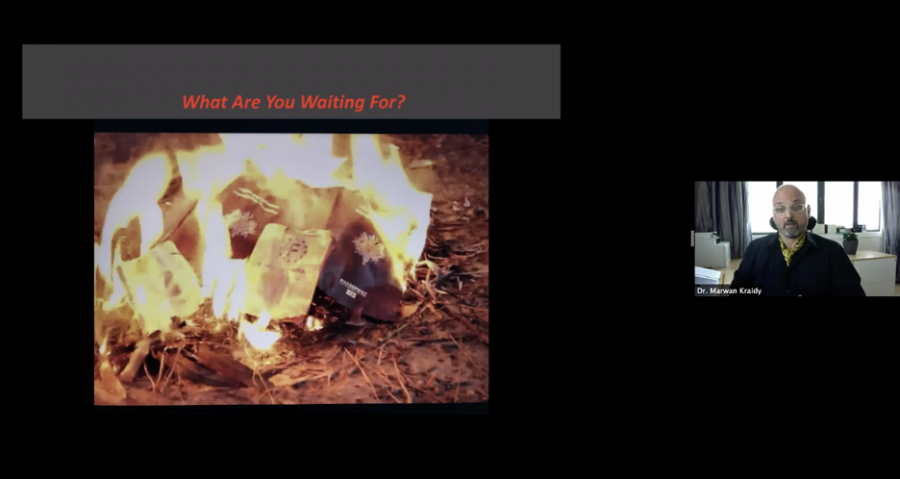 From using words like “wildfire” to describe viral content to the sun wheel sign used by the Christchurch attacker, fire is a potent symbol. In his first address to the Education City community, Marwan M. Kraidy, the dean and CEO of Northwestern University in Qatar, spoke about how fire is used as a tool across media, politics and technology.

On Sept. 17, Kraidy spoke in a Zoom webinar organized under Texas A&M at Qatar’s Al Maerifa Public Seminar Series. The webinar, “The Torch and the Hearth: The Universe of Meaning of Extremism,” was moderated by Hassan S. Bazzi, associate dean for research and advancement at TAMU-Q.

Kraidy’s interest in fire as a medium of expression began when he wrote his book on the Arab Spring, “The Naked Blogger of Cairo.” His talk was mainly based on parts of the research he conducted under an Andrew Carnegie Fellowship awarded to him in 2016. Kraidy said he spent the last five years looking at primary sources, from media to the manifestos of the white power groups in the U.S. and the Islamic State. “I was much more interested in understanding the rise of ISIS at the beginning … I began to see a lot of connections between the two groups,” said Kraidy.

Kraidy shared his findings of how fire is used as a tool of communication and his interest in how images with fire make us feel. Due to its ability to elicit emotions, he stated that fire communicates “affectively.”

Fire also re-codes emotion, according to Kraidy. For example, the Islamic State’s focus on the satellite dish as a portal to foreign ideas has redefined the fun of watching television into a fear of everything that is foreign or different. He demonstrated this with an example of an animated video produced by ISIS in which a child sitting in front of a television is slowly encircled by a ring of fire. Since fire cleanses and purifies, its use in the cartoon is meant to symbolize protection against foreign cultural influences via television. This kind of messaging is also combined with ISIS campaigns to destroy satellite dishes by burning them. For extremist groups generally, fire tends to hold symbolic and hence communicative power, according to Kraidy.

Kraidy also explained how fire is a tool of polarization. One manifestation of fire is as a torch, which is a way to attack the enemy. The other is as a hearth, such as a bonfire or a lamp, that everyone gets around to create community. One example of the former is the sun wheel symbol, which is also connected to fire. This symbol was part of the manifesto of the Christchurch attacker, Kraidy said, and is meant to symbolize the French far-right theory of “the great replacement,” which claims that brown immigrants and Muslims are replacing white Europeans.

Kraidy said he is most interested in the realm of pyropoeisis, which is about how fire is used to create meaning, especially in media and communication. Examples he listed include China using the term the “Great Firewall of China” for its national internet protection and how some movies are described as “slow burn.”

“Just pay attention to … the language we use when we talk about our own media consumption—fire is all over the place,” he said.