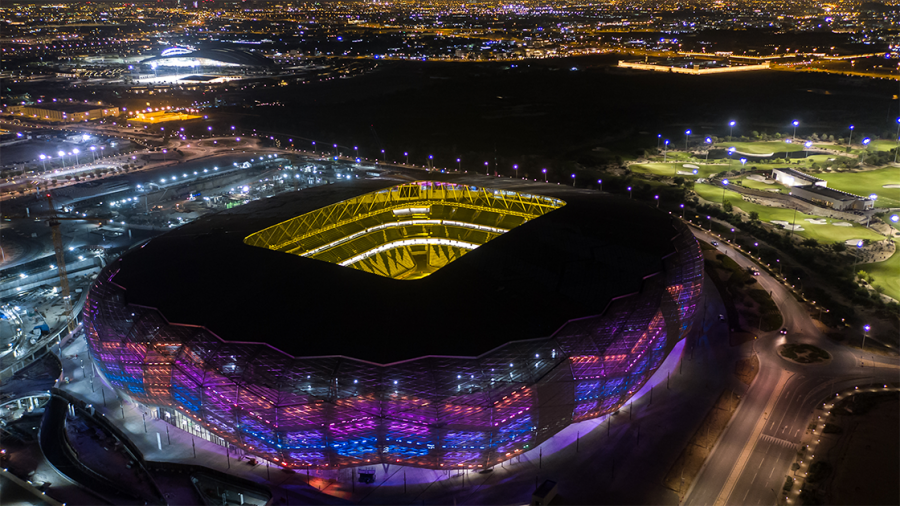 The COVID-19 pandemic brought the world to a halt, but Qatar Foundation and its partner universities were still active throughout the summer months with different online programs, faculty appointments and pandemic initiatives. As we enter the Fall’s virtual semester, let’s take a look back to celebrate some of the QF community’s achievements over the summer.

On June 15, the Supreme Committee for Delivery & Legacy and Qatar Foundation officially announced the completion of the third stadium for the FIFA World Cup 2022. Located in Education City, the stadium is nicknamed the ‘Diamond in the Dessert’ and has been given a five-star Global Sustainability Assessment System certification, according to QF. The completion was celebrated digitally on QF and the Supreme Committee’s social media, as well as through an hour-long televised program in Arabic and English on beIN Sports.

After the World Cup, Qatar plans to reduce the stadium’s capacity by half and donate the other half (20,000 seats) to developing countries for the construction of their own stadiums. Along with allowing local sports clubs to use the facilities for their events, the stadium will also serve as an official space for the offices of sports-focused non-governmental organizations. Overall, the stadium is expected to become a center for sports, learning, entertainment and leisure.

Marwan M. Kraidy was appointed the new dean and CEO of NU-Q after the previous dean, Everette E. Dennis, stepped down in 2020. On July 1, Dean Kraidy officially took office. On his first day, Kraidy sent an email to the community applauding their efforts in adjusting to remote learning. He also addressed ongoing racial injustice in the United States and emphasized the importance of a diverse and inclusive environment. “I envision our school as … a foundational actor that contributes to multiple environments and speaks to several publics,” he said in the email.

After pandemic restrictions prevented an in-person debate, Doha Debates organized their first virtual live debate on July 20. Speakers from across three continents argued their viewpoints on the topic “Socialism – is the pandemic a catalyst for radical change?” The forum featured Fatima Bhutto, a Pakistani author and commentator; Tabata Amaral, a Brazilian congresswoman and activist; and William Hague, former UK foreign secretary and Conservative Party leader. As part of the fully virtual setup, a group of young people formed a voting panel while other viewers provided real-time feedback through social media. Bhutto’s argument for entirely re-imagining economic systems was most popular in both rounds of voting, while Amaral’s support for creating a balance between growth and development through legislation came second. Hague’s proposal for more innovation and economic freedom was the least popular.

GU-Q’s Black Students Association held a webinar on Jun 4 to discuss police brutality and racial injustice in America. Hosted by Lina Hajo and Tsedenya Girmay, the panelists included Maurice Jackson, associate professor of history and African-American studies at Georgetown University in Washington, D.C.; Karine Walther, associate professor of history at GU-Q; and Clyde Wilcox, professor of government at GU. Another webinar was held by the BSA on July 6 with students Kamilah Idris, Iman Ismail and Heba Mohamednor discussing “Black Lives Matter and the Black Experience,” and what it means to be a genuine ally to the Black community. Idris discussed the importance of being anti-racist, while Ismail expressed outrage at increasing performative activism, and Mohamednor stressed the importance of education to understand the Black Lives Matter movement.

On June 28, GU-Q students held a webinar open to the public called “Annexation as a Whole.” The panelists invited were Sami Al Arian, a Palestinian political activist; Sami Hermez, associate professor of anthropology at NU-Q; and Maryam Al-Khater, a rising junior at GU-Q studying international politics and history. Moderated by GU-Q students Zain Assaf and Bothaina Namous, the panelists discussed Israel’s planned annexation of parts of the West Bank and what it would mean for the future of Palestine and its people.

When Dr. Mai Al-Qubaisi heard that VCUarts Qatar students were producing face shields, she reached out to them to suggest designing face shields for infants as well. Al-Qubaisi, a senior consultant in Neonatal Intensive Care and medical director of the NIC Unit at Hamad Medical Corporation, had observed how countries such as China were acting fast to make infant shields and thought quick action should be taken in Qatar as well. Concerned about the safety of newborns in the NIC Unit whose mothers had tested positive for the virus, she met with Chris Buchakjian, the university’s Digital Fabrication Lab & Woodshop coordinator. Buchakjian and his Fab Lab team worked over Eid break to design the masks and delivered the first hundred face shields in the span of just a few days.

The Infectious Disease Epidemiology Group at WCM-Q has been designated as an official collaborating center of the World Health Organization to combat COVID-19 and other selected infectious diseases prevalent in the region. Through research-based suggestions, they will assist the WHO in supporting policy decisions and public health programs in the Eastern Mediterranean Region. On July 8 Sheikha Moza bint Nasser, the chairperson of Qatar Foundation for Education, Science and Community Development, attended the official inauguration of IDEG as a WHO research center. The research group is led by Laith Abu-Raddad, a professor of infectious disease epidemiology at WCM-Q.

Texas A&M at Qatar Researchers Use Snorkeling Masks as Ventilators

In their effort to make mask prototypes that can help protect against COVID-19, professors and lab engineers at TAMUQ have repurposed snorkeling masks as ventilators. The project was led by Marwan Khraisheh, professor and chair of the mechanical engineering program at TAMUQ, and Yasser Al-Hamidi, laboratories manager in the mechanical engineering program at TAMUQ. Their design includes using an adapter to plug the snorkeling mask into a ventilating machine. The adapter also makes the ventilator non-invasive by omitting the need for inserting a tube into the patient’s trachea. Modification of the mask to prevent contaminated air from leaking when worn by a COVID patient will help health care providers stay safe. The model can also be used as a substitute for N-95 masks. TAMUQ has donated the re-engineered masks to QF, Qatar Red Crescent and HMC.

With first-year students not being able to visit their new homes in Education City due to the pandemic, EC universities welcomed them by carrying out their longest ever virtual orientations. GU-Q’s New Student Orientation ran from July 12 to Aug. 20. The program welcomed the university’s largest ever incoming class of 141 students and delivered a combination of pre-recorded modules and live sessions. “I never realized I could be this engaged and form such strong relationships with people online,” said Dalva Raposo, a GU-Q freshman from Mozambique.

Northwestern University in Qatar’s asynchronous orientation ran from Aug. 4 to 16, after which the synchronous orientation was conducted till Aug. 20. Alongside sessions with faculty, staff and peer advisors, NU-Q also organized games on weekends, such as “Guess the Celebrity.” “I felt as if it helped prepare me for NU-Q while also allowing me to be close to family,” said Mishaal Hasan, a first-year student from Pakistan.

On Aug. 18, CMU-Q appointed Annette Vincent as its first associate dean for diversity and climate. Vincent has been a faculty member at CMU-Q since 2012 and program director for biological sciences since 2016. Her work will encompass leading the planning, implementation and evaluation of measures for diversity, inclusion, climate and equity, as stated in CMU-Q’s press release. The position was created by CMU-Q Dean Michael Trick to create an environment and community that is more diverse, inclusive and fair. In the press release, Trick said he hopes the role will encourage collaboration and ensure that members of the CMU-Q community achieve their full potential.