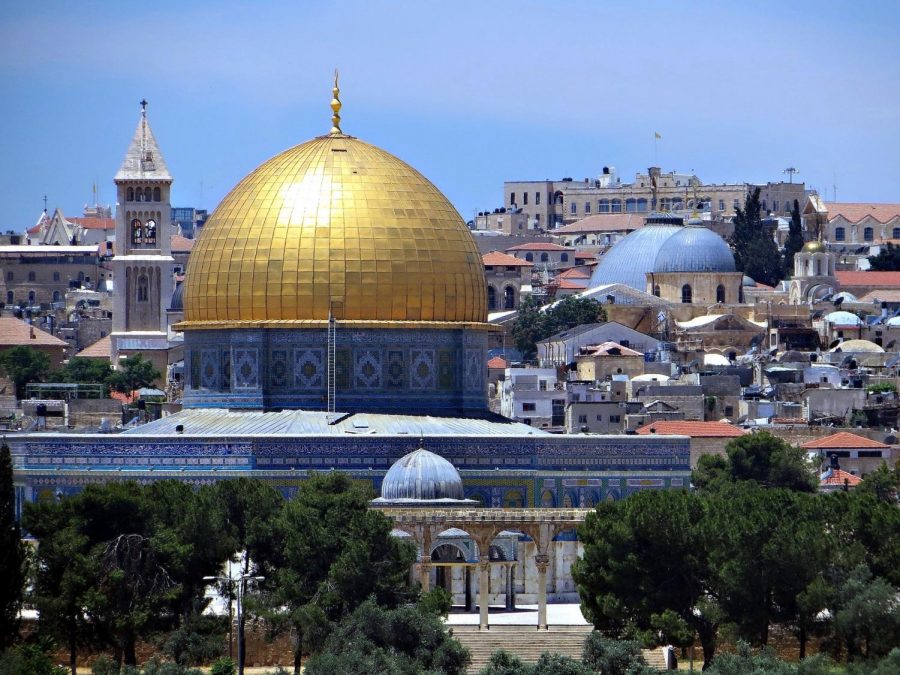 On January 28, US President Donald Trump unveiled his Middle East “peace plan” on one of the world’s most pressing conflicts. The “Deal of The Century,” as he called it, was revealed in the middle of Trump’s impeachment trial and on the day that Israeli Prime Minister, Benjamin Netanyahu was indicted for cases of fraud, bribery and breach of trust.

When the proposal titled “Peace to Prosperity” was released, it immediately received criticism on social media and was rejected by the Palestinian Authority. According to AlJazeera, “Qatar said it welcomed efforts to broker peace but warned that was unattainable without concessions to the Palestinians.” Protests in the Gaza strip and occupied West Bank erupted in the wake of the proposal, and it also spurred on protests in Jordan and Lebanon. American politicians, like democratic presidential candidates Bernie Sanders and Elizabeth Warren, voiced their disappointment with the proposed plan on social media.

The United States can bring unequaled leadership to resolving the Israeli-Palestinian conflict, but we must use that leadership to promote a just and durable agreement. Any acceptable peace deal must be consistent with international law and multiple UN resolutions.

Trump's "peace plan" is a rubber stamp for annexation and offers no chance for a real Palestinian state. Releasing a plan without negotiating with Palestinians isn't diplomacy, it's a sham. I will oppose unilateral annexation in any form—and reverse any policy that supports it.

But what about Education City students with connections to the region? They too voiced their disapproval with the plan. EC is home to a multicultural community, with a large portion of its students, faculty and staff being Palestinians who expressed a similar dissent towards the proposed plan. On February 4, different Palestinian clubs around EC collaborated in calling their peers to wear Kuffeya’s as a sign of solidarity with the Palestinians.

“Being Palestinian means that I was automatically swept into politics from a young age, given that it is something that I saw, heard, and felt every single day,” said Basel Humos, 22, a fifth-year medical student at Weill Cornell Medical College in Qatar, who is orginially from Palestine and particiated in wearing a Kuffeya in opposition to the proposal.

But what does this plan actually suggest for the Palestinians? The plan advocates a two-state solution, but critics see the plan as favoring Israel in almost every aspect.

The proposal suggests there will be a four-year settlement freeze from Israel, meaning they cannot take more land for settlements in four years, but the current illegal settlements which they already have will become officially recognized as Israeli territory. Palestine will have control of the lands highlighted in the map that Trump tweeted below. “It is a plan made tactically to ensure Palestinians have no control, and it is a plan that in turn allows Israel to further enforce itself upon Palestinians,” said Danna Takriti, 20, a Palestinian journalism junior at Northwestern University in Qatar.

This is what a future State of Palestine can look like, with a capital in parts of East Jerusalem. pic.twitter.com/39vw3pPrAL

Not only is the land scattered but, the plan fails to address the Palestinian demand for the right of return for displaced Palestinians. There are millions of Palestinian refugees across the world today who do not have the ability to return to Palestine.

The plan also conditions that in order for Palestinians to have a state, they must be unarmed. They are prohibited from producing weapons and Israel has the right to destroy any facility it finds threatening. They also cannot have a military to defend themselves, if they wish to expand “security capabilities” it must “be subject to agreement with the State of Israel,” which takes away the sovereignty of Palestine.

“Millions of martyrs gave their souls to the right of return to the land that they were kicked from. It is unacceptable that we are expected to be grateful and accept our “enemy” to share [with] us our homes, land and country,” said Yousef Diab, a 21-year-old Palestinian who runs the Palestinian Culture Club at Texas A&M University at Qatar.

Declaring  Jerusalem to be an “undivided capital” of Israel is a big decision, but in reality Israel will get the majority of this capital with only a few neighborhoods for Palestinians. Israel will maintain sovereignty over these neighborhoods. Israel also plans to take land from the West Bank and give Palestine areas near the Egyption border. “It’s dismissive of a whole nation…you are asking them to lie down and lie down quietly,” said Humos.

“At first I was frustrated and disappointed, but then I realized that there was nothing else to expect out of this,” said Palestinian Ramez Bodair, 22, a fifth-year medical student at WCM-Q. Many echoed this sentiment on social media and called on the lack of Palestinian involvement in the plan. Like Jehad Abusalim, a PhD candidate in History at New York University who is specializing in the modern history of Palestine.

In 1920 the Mandate for Palestine was imposed without involving Palestinians.

In 2020, a "peace plan" was just announced without involving Palestinians.

Both visions affect Palestinian lives directly, but Palestinians were and still are rendered invisible on their land.

The proposal puts forth that there will be assistance from the United States to help ‘build’ the Palestinian state with $50 billion over ten years. This economic bill for the proposal was seen by some as reading like a real estate brochure. It talked about improving Palestinian’s lives by investing in private sectors but it barely mentioned Israel or even a Palestinian state.

Although the report states that the plan aims to create “A Vision to improve the Lives of the Palestinian and Israeli People,” there was no Palestinian involvement in its drafting. [full report here].  “It solidifies a decades-long status quo of Israel as an apartheid and settler colonial state,” said Sami Hermez, an anthropology professor at NU-Q.

Why release this plan now? There are multiple assumptions by the media about the timing, many say it is to help both Trump and Netanyahu gain support and votes in their next elections. By Palestinians opposing the deal, some argue that the proposal aims to portray Palestinians in a negative light in front of the international community. “I believe this whole plan aims to isolate Palestine and Palestinians and [make] them appear “ungrateful” and opposing peace in front of the rest of the world,” said Diab.

The plan has highlighted the amount of support that Israel has from the US, by not bringing the Palestinians into the conversation. “It just spells out in clear terms the racist policies Israel has been undertaking all along,” said Hermez. “And of course the plan will carve out a scattered Palestinian state. This is because the two-state solution cannot result in anything but a scattered Palestinian state,” he added.