Media Majlis: Women poets on poetry and uprisings in the Middle East 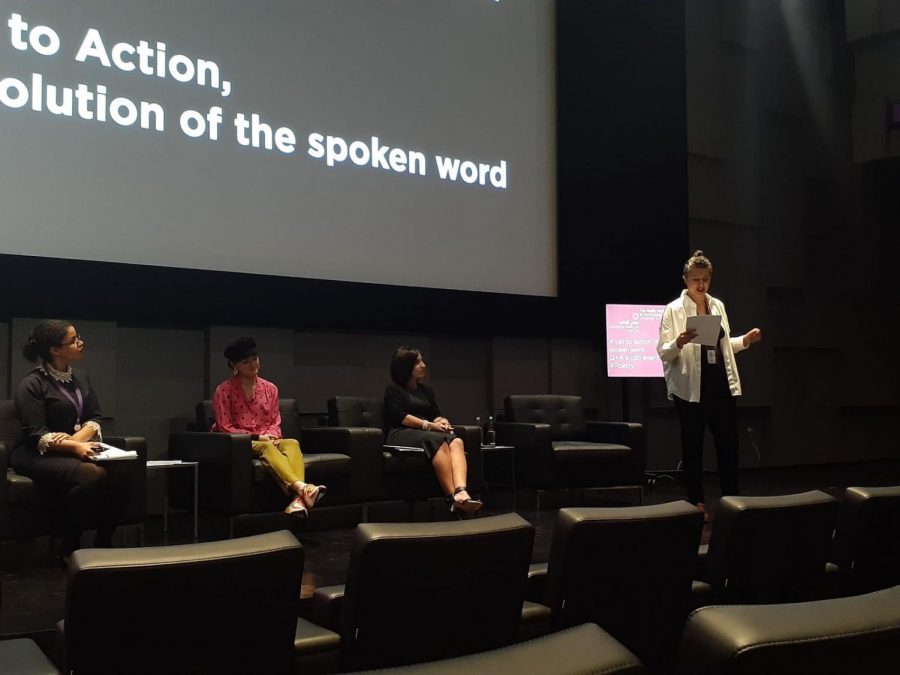 Media Majlis' panel discussion titled “A Call to Action, the evolution of the spoken word" on Tuesday.

The Media Majlis welcomed three Arab women poets and practitioners for a discussion on poetry in the Middle East, on Tuesday. The discussion titled “A Call to Action, the evolution of the spoken word” debated the use of poetry, a “longstanding” practice in the Middle East, as a means of communication and awareness in the midst of uprisings across the Arab world.

This is part of this semester’s Media Majlis’ exhibition, From Visionaries to Vloggers: media revolutions in the Middle East which revolves around the uprisings that erupted across the Arab region, citing social issues, poverty, corrupt regimes, freedom of speech, lack of civil liberties and women’s rights. The exhibition displays how Arabs have been rallying for social, economic and political justice for generations. It emphasizes Arab adaptation of various platforms, that has helped push forward these narratives.

Sabrina Mahfouz, a British-Egyptian poet, playwright, performer, and writer, brought a plethora of poems with her to the discussion. She told the stories of women who had rejected societal norms and read excerpts from a children’s poetry book that addresses climate change, nature and other important matters in between.

Bringing a sweet aroma of jasmine with her from the heart of her beloved Damascus and 30 years of livelihood in Canada, Ghada Alatrash, an author, translator and doctoral student with a Masters in English literature, also filled the Majlis with stories told through poems. With much of her work alluding to poets like Nizar Qabbani and Mahmoud Darwish, Alatrash narrates the stories of women – especially Syrian women, feminism, and the current situation in Syria. “ I believe that one of the most powerful ways to do this is by countering the dominant colonial narratives and by … re-storying of what has been presented as knowledge,” she said. “My ultimate hope in writing, reciting, teaching is to engender that empathetic, cultural understanding of the other, to engage in narratives that speak to lived experiences of people who have been spoken about,” Alatrash added.

One of the poems she recited was “Em Mhannad” (The Mother of Mhannad). The poem narrates the story of a Syrian mother who waited for her son Mhannad to come back from university one evening only to find out that the University of Aleppo’s Faculty of Architecture was bombed, and her beloved son died a martyr.

Dima Matta, a writer, instructor, actor and spoken word artist in Beirut spoke about how she tries to distance herself from the cliché romanticization of the city. “So my poems are kind of all over the place,” Matta said jokingly. Some of her writing talks about freedom, rights, queerness, heartbreaks, revolutions, and mental health through intricately detailed explanations. Matta shed a lot of light on the queer scene in Lebanon, most notably Beirut, and their presence in the community in the recent on-going revolution. She also shared her own personal relationship with the queer community. “My Tribute to Boys Who Wear Eyeliner” is a touching, personal poem about Matta’s guy best-friends who had to leave Lebanon and are now scattered all over the world. They are even in places where her poem, might not be welcomed.

The incredible diversity of these topics not only reiterated the importance of poetry, but also the power of poems in revolutionizing the Middle East from all aspects. “We have been told for the longest time that our stories don’t matter, as kids…as women… To be able to take up space, and to tell your story, for me that is revolutionary,” said Dima.