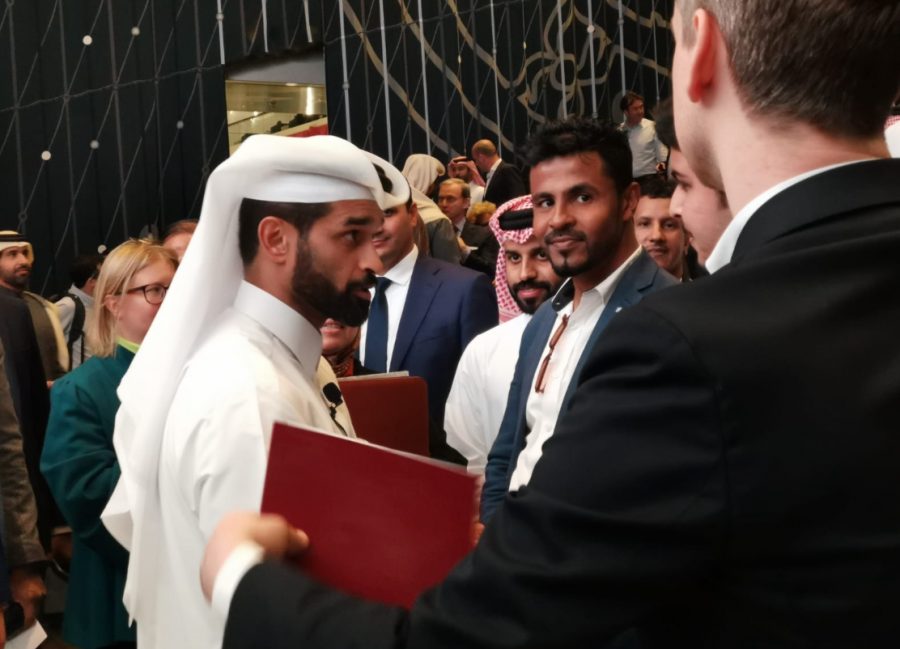 Hasan Al Thawadi, head of the Supreme Committee for Delivery and Legacy, giving a talk at the Qatar National Library

Contractors in Qatar will reimburse workers for what they had paid recruitment agencies to come to Qatar, said Hasan Al Thawadi, head of the Supreme Committee for Delivery and Legacy on Monday.

A 2016 investigation on the effects of the Kafala system had found that workers either pay or take significant loans for recruitment agencies to get a job. Al Thawadi announced that contractors will be covering these fees.

“I think by 2020, 83 percent of our workforce will have the recruitment fees reimbursed. We are talking about 30 million dollars,” said Al Thawadi.

He added that Qatar is the first Gulf state to set a minimum wage for workers regardless of their nationality. Also, apart from the removal of most exit permits, the Supreme Committee is working on effective ways where workers would have the opportunity to “raise complaints in safe environments whatever they maybe”.

Last year, Amnesty International and The Guardian had criticized the working environment including unsafe working conditions and unpaid labor.  But Al Thawadi said that criticism about worker conditions is “dying down”. He said it is necessary not to be complacent with improvements but still communicate them effectively and truthfully.

He also discussed other improvements that were strategically designed to fit the national vision.“We were lucky enough to have 12 years … to develop our legacy plan,” said Al Thawadi. He discussed how the increase in infrastructure, particularly the metro system, is visibly changing the commuting patterns of members in the community.

As for sustainability, Al Thawadi talked about how Qatar has committed to making this tournament the first carbon-neutral tournament. The commitment is through awareness campaigns, mitigation efforts and offsetting unavoidable emissions and energy consumption including air travel.

“Fifty-five percent of our material is sourced from sustainable sources,” said Al Thawadi. Ensuring water and energy efficiency has been in the forefront of their sustainability measures. Other efforts include the incorporation of energy-efficient LED lights and the demountable Ras Aboud Stadium.

The recent announcement of Al Kharsaah Solar PV IPP plant which would generate 800MW of electricity is also part of a green energy initiative made by this committee, said Al Thawadi. Solar energy will be used to power toilets, lighting and weather monitoring stations.

Al Thawadi stated that all these changes make Qatar unique. “The legacy started from day one. Many nations only start looking at legacy after the tournament, but we planned for it.”