The Harms of Vanity Apps 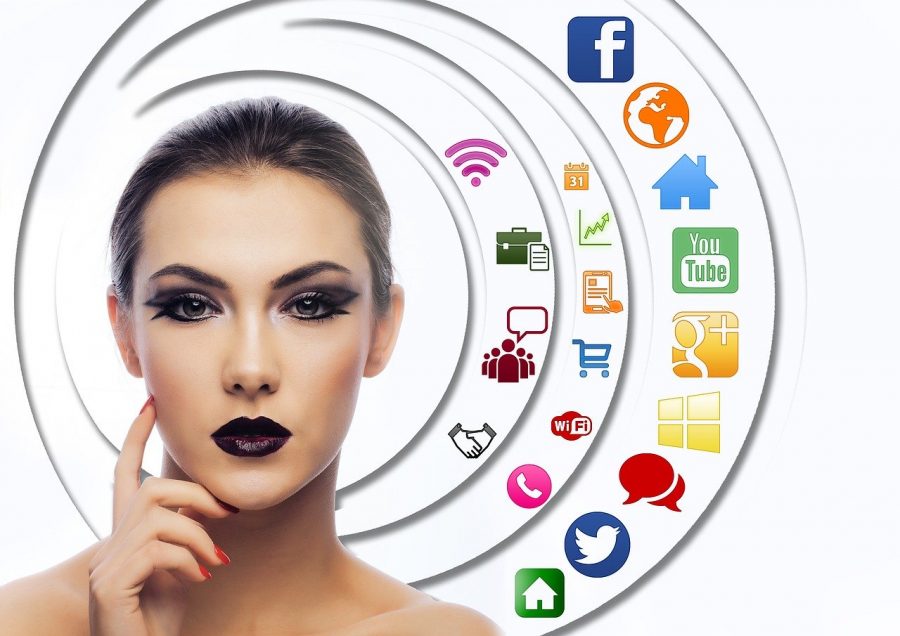 While on my trip to Morocco last winter, I took a selfie where the lighting and my makeup looked really good, but my smile did not. That one picture with good lighting, unfortunately, was not matched with a nice happy smile. After going through a couple of more pictures and taking my friends’ opinions on which one highlights my features the best, one of them replied back to me with an edited version of one of the pictures and told me to eagerly post it. Except it was not just color edited or sharpened with highlight and contrast options. My features were changed. I had clear dark defined eyebrows, a happy fake smile, bigger and a perfectly shaped nose. I looked at the picture and thought to myself:  is this normal? Is this what people my age do to feel that a picture is “good enough” to post?

I kept going back and forth comparing both pictures trying to look at the changes, but could not bring myself to post it. I mean, I was someone who never physically altered my features or body for social media, yet I was told I should post this picture and no one would be able to tell.

However, that was not the reason I didn’t post the perfectly edited picture; rather, it was my concern about how normalized it had become for people, especially young women, to alter their image for some public. I thought to myself that, if I posted this picture, then I was accepting the creation and portrayal of unrealistic beauty in order to heighten my self-esteem and my body image. I was also accepting the fact that my natural self was not good enough and rather needed changing to be able to deem acceptable or favored by my followers.

I usually scroll through my Instagram during the morning, day and night, and so my eyes are constantly exposed to picture-perfect photos of different girls and women, with “perfect” bodies: the usual hourglass shape, flat stomach, no rolls, the thigh gap, full makeup, perfect facial features seeming to be perfectly fitted within the face, and last but not least, the pumped-up lips (let’s not forget about the once upon a time#KylieJennerChallenge).

Going off of this, I decided to ask a question on my Instagram account through a story post for 24 hours to see how many people would actually respond. I asked if anyone had edited their pictures that they had posted, and would be willing to talk to me. What surprised me is that out of the 300 people that saw my story, only six people replied to me. While five of them (two women and a man) openly told me they edit their pictures, a post-graduate student at Northwestern University in Qatar, replied saying, “If you don’t get at least 1,000 people DMing [direct messaging] you, they’re a bunch of liars,” he said. This really struck me because not only did I agree with it, but it made me realize how toxic social media has really become. A place where everyone believes or knows how fake pictures and people’s lives are portrayed through their screens on social media accounts. It reaffirmed the notion that we only post and show the good parts of our lives or the “perfect” pictures of ourselves. What surprised me, even more, was that a few days later, one of the people I follow on my Instagram account posted about her concern over a sponsored ad she received while on the app. The ad was encouraging the use of the Photoableapp, which showed the process of editing a girl’s picture in a two-piece swimsuit to have a slimmer, more toned body, alongside the addition of an arm tattoo to the girls’ right arm.

If you think about it, these photo editing apps, in reality, are distorting our perceptions of reality– essentially creating a mental, physical, and emotional nightmare for all those surrounded by it or using it. People think the pictures you post look exactly as you saw it, which sends a false message.

Apparently, for some, it is clear that it does matter. Take the famous influencer James Charles for example. The YouTuber, with 16.1 million subscribers and calls himself “the queen of Facetune,” created YouTube videos that teach his followers how to use Facetune. He gives a step by step tutorial on how to use the app to create a “new you” in a matter of minutes. Not only does he teach them how to use the app, but he also has another YouTube video with over 10 million views where he face-tunes his followers’ selfies.  Even though he claims this practice is fine as long as “you’re not crossing any red lines and you’re open and honest about it”, I find it hard to find where that red line is. I mean, some people completely disagree with face tuning while others believe it is acceptable and encourage it, so is there a red line? and how do we define it?

“If people are complimenting a girl for looking amazing in a photo that’s been self-corrected, what does that say to the girl?” says Robyn Silverman, Ph.D., a body-image expert and author, in an interview with Teen Vogue.

“I think that it’s negative because it just doesn’t reflect the reality of the picture that you captured. It tricks people into thinking that this picture actually looks like the exact same thing in real life,” said Abdulmajeed Adam, 20, a journalism student at NU-Q. While many prefer the removal of such apps, it does help some be more aware of what is realistic and what is not.

“Since I started using these apps I feel better about when scrolling on Instagram because it’s easy to tell who’s edited the photos, and so it makes me feel ok this isn’t real and I’m aware of it,” said Elissar Haidar, 21, a psychology student at the University of Manchester.

However, Facetune, for some people, went beyond just a phone app with different makeup options. It became a basis for their plastic surgery change. “In 2014, more than 160,000 teens ages 13 to 19 had cosmetic minimally invasive procedures, such as chemical peels, injectables and laser skin resurfacing, and more than 63,000 had surgical ones, such as nose reshaping or breast augmentation, according to the American Society of Plastic Surgeons,” according to Teen Vogue. Priorities have shifted where it’s no longer about editing and getting the perfect picture, but rather changing their actual features permanently to maintain that perfect look in real life.

Despite this so-called selfie surgery that millennials have undergone, which has raised controversy,  Dr. Lara Devgan, a plastic and reconstructive surgeon, said that there is less guilt about undergoing procedures in a YouTube video.

“Five or 10 years ago people might’ve brought in the picture of a magazine cover supermodel. Now they’re bringing in a picture of themselves, but just in a slightly optimized way where Facetune or a Snapchat filter will give them a millimeter more of a cheekbone projection, or a fuller lip, or a straighter nose. It represents a healthier version of body image.”

However, according to the Guardian, “A recent report in the US medical journal JAMA Facial Plastic Surgery suggested that filtered images’ ‘blurring the line of reality and fantasy’ could be triggering body dysmorphic disorder (BDD), a mental health condition where people become fixated on imagined defects in their appearance.”

While many are using social media platforms to portray unattainable beauty standards, others are using it to raise awareness regarding the reality behind people that use Facetune. Successful influencers Emma ChamberlainandJoana Ceddia, who were unable to relate to such “perfect” lives, have forgone Facetune and rather post more goofy and realistic photos that reflect everyday life, including the bad angles and all. “The future of online personas, it seems, is weirder and less beautiful, because being beautiful is a lot less interesting now that it’s available to everybody,” says Rebecca Jennings, a reporter covering pop and internet culture at The Goods by Vox. Others, such as famed British photographer known as Rankin, have used their platform to advocate against the serious damage that social media has the potential to result in. His photography series entitled Selfie Harm, sheds light on the necessary edits that teenagers feel the need to make to a portrait taken of them for social media platforms like Instagram.

“It’s just another reason why we are living in a world of FOMO, sadness, increased anxiety and Snapchat dysmorphia. It’s time to acknowledge the damaging effects that social media has on people’s self-image,” said Rankin on an Instagram post.

Because of the significant emotional, mental and physical issues that have arisen given unrealistic and simulated beauty standards shared and encouraged across social media platforms, clothing brands, such as Verilyand Aerie, are working towards shifting the narrative and fostering a more positive and safer environment that young millennials can experience. They verified that they do not Photoshop any of the models on their website, keeping the pictures untouched. Aerie has used their #AerieREAL movement, created by American Eagle’s Aerie brand, to encourage women to embrace their natural beauty, insecurities and flaws the models may feel that they have. They found a way to celebrate with others rather than being ashamed or trying to hide one’s insecurities as we have been programmed to do. “They are still models, they’re still gorgeous, they just look a little more like the rest of us,” said Jenny Altman, an Aerie brand representative, in an interview on Good Morning America.

It is clear that the removal of such apps is not the answer to solving the issue, as mobiles and photo editing apps are taking over our everyday lives and play a role in our overall freedom of creativity and experimentation. However, it is important that we ask ourselves if we are able to reach even a stripped form of realism as a society, where what we see is what we really get: a society where imperfections are not hidden.