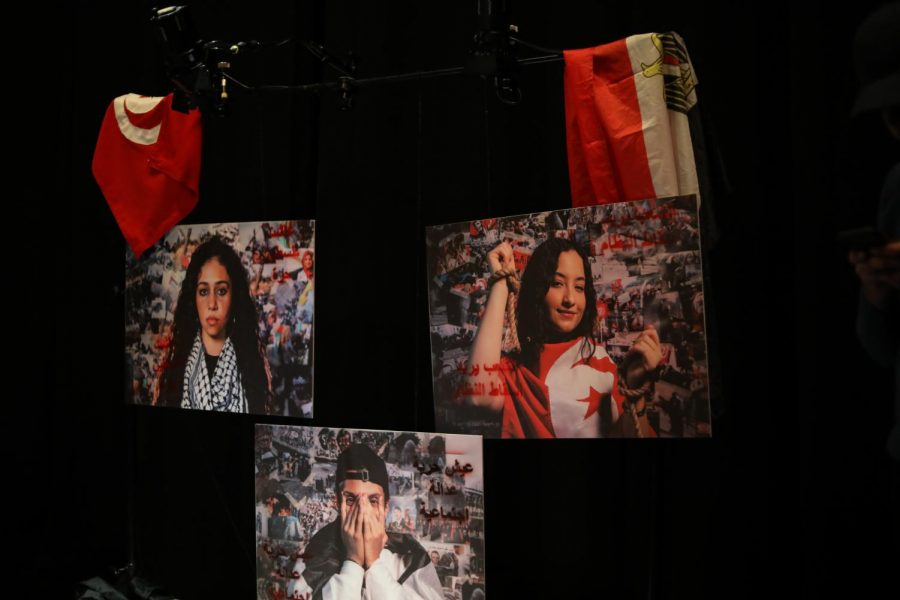 Photographs of "Solidarity," a project from the Creative Media Festival showcasing the birth of revolutions across the region and their different outcomes.

From spoken word and dance, to painting, photography, and sculptures, the Northwestern University in Qatar Creative Media Festival 2020 was a celebration of artistic self-expression.

The annual 48-hour festival, which took place this weekend, culminated in a showcase of seven team projects and two solo performances that encompassed different media and art forms. The theme of the festival was “Rising Up/Uprising.”

“The theme is always something that is specific enough to cause a reaction but broad enough to encompass a variety of perspectives,” said George Bajalia, mentor and artistic director of the Creative Media Festival.

Now, in its third year, the festival was guided by three creative mentors and led by three student co-leaders. It was preceded by a roundtable discussion on the theme Rising Up/Uprising with Fahad Al Obaidly, Qatari fashion designer, artist, curator and filmmaker, and Marcela Pizarro, assistant professor in residence at Northwestern University in Qatar.

At NU-Q “everyone’s either a communications major or a journalism major, but that doesn’t really describe the breadth of the artistic expression that the students have,” said Casserly. One of the things that unites the different media stories and art forms the students produce is the festival theme, he added. In 2018, the inaugural year of NU-Q’s Creative Media Festival, the theme was “Borders and Boundaries,” and the following year, it was “Legacy and Promise.”

One of this year’s student projects was “For a Girl,” a spoken word and a dance performance, which told the story of the struggles that girls face. “Telling stories is often a way of rising up and expressing what you’ve gone through,” said Maryam Gamar, a journalism sophomore who wrote, “For a Girl.”

The aim of the Creative Media Festival is to create relationships, experiences, ideas, and challenges that people can carry with them forever, according to actress Caitlyn Nasema Cassidy, mentor and artistic producer of the Festival.

In the months leading up to the festival’s showcase, people submit ideas for the theme using an iPad set up at NU-Q’s forum. The student co-leaders help synthesize the suggestions and ideas into a coherent theme and help understand them in context of what is happening in the Northwestern community, said Casserly. The co-leaders, together with the creative mentors and a Creative Media Festival Committee, which includes faculty and administrative staff, then look at the submissions to select the annual theme.

For the creative mentors, the festival is about more than the showcase at the end of the 48 hours.

“It’s about the process and the experience of working together and collaborating differently,” said Bajalia. “[It’s] about seeing self-expression in different ways,” he added.