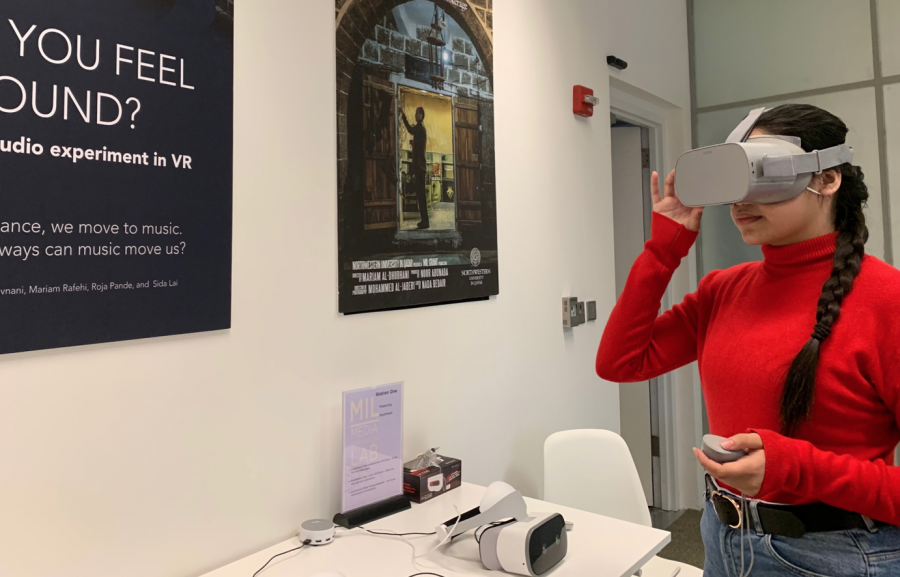 A student using the virtual reality headset in the Media Innovation Lab, Northwestern University in Qatar

The rise of educational technology has allowed students in Education City the opportunity to enhance their academic knowledge and experiences. Weill Cornell Medicine-Qatar set up several simulation labs in which medical students have access to real-life doctor-patient interactions to learn how to approach patients professionally.

“The simulation rooms are made to look almost identical to a real-life doctor’s office or an in-patient room,” said Jibrail Cheema, a first-year student at Weill Cornell.

The simulation labs are advanced with their robotic patients that have haptic feedback, speech, facial movement, pain response, and can sense a wide range of diseases and situations.

Professors guiding these students through the simulations are medical professionals. This puts the students at an advantage since they are directly learning from experienced individuals.

“They know what will happen within the hospital setting, so they can tailor our situations to best mimic real life. Our professors also do practice scenarios on these robotic models when they are preparing situations for the students,” said Cheema.

Similarly, Northwestern University in Qatar has a Media Innovation Lab (MIL) with two main areas of focus: 360 video production and VR (Virtual Reality). The VR headsets at NUQ allow students and staff members to experience what it is like to be in an immersive environment.

The MIL has a variety of VR headsets such as the Oculus Quest and go, HTC Vive Pro, and the Lenovo Daydream.

“The oculus go headsets have a variety of applications and are the ones that we use to upload 360 videos when they are being showcased for a class,” said Greg Bergida, director of planning, assessment, and strategy at NU-Q.

The oculus quest is the latest VR headset in MIL. It comes with handheld controllers and gives producers the ability to create their own interactive environments, since students are able to move objects around and navigate through the environments. Through virtual reality, students are now able to tell a non-linear story. “If you shoot something in 2D, there’s only one thing that the viewer can look at; you determine their field of view,” said Bergida.

Shooting 360 video also challenges students because it is not the most intuitive way of filming. It requires students to think of different ways of shooting. “You have to get more creative in the 360 environments because there is nothing that is out of frame,” said Bergida.

The future of integrated learning technologies in Education City is ongoing. Currently, there are collaborative projects worked on by students that include virtual reality productions of the Walled City in Lahore, for example, and one that follows a Nepalese porter.