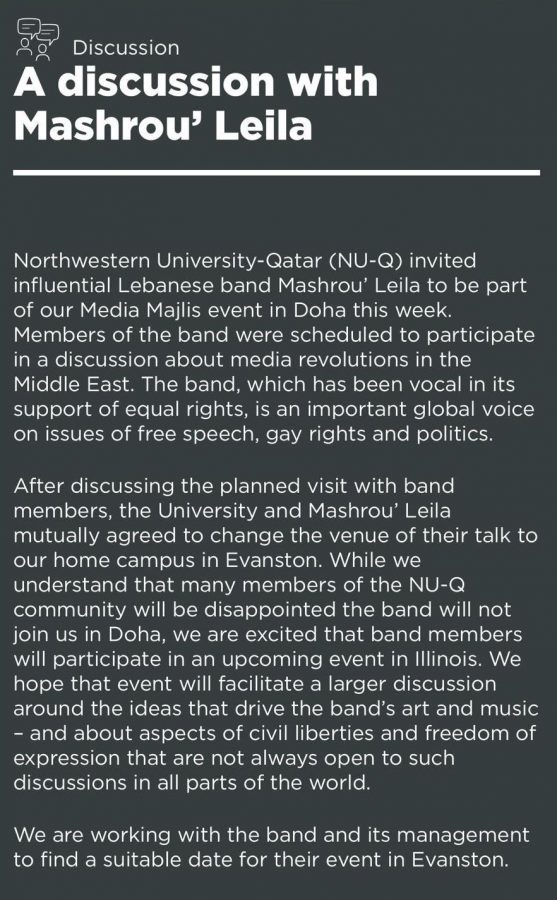 A screenshot of the Media Majlis' official statement on relocating the Mashrou' Leila event to the Evanston campus.

The Media Majlis had invited the band to give a talk titled, “Language and the Rhythm of the Street,” as part of the Majlis’s newest exhibition, “From Visionaries to Vloggers: Revolutions in the Middle East.”

The topic of the band’s presentation and class visits revolved around the way their lyrics are employed as an alternative mode of communication to channel the rhythm of public dissent and social activism. The band was also scheduled to be part of NU-Q’s annual Creative Media Festival.

The decision to move the venue and timing was “mutually agreed” upon, according to Craig LaMay, acting dean and professor in residence at NU-Q. In a town hall meeting with NU-Q Faculty Monday afternoon, LaMay said that he had spoken with the band members about their visit. As a result of the conversation and consultation with the provost’s office in Evanston, the band and NU-Q both felt that because of security and safety reasons concerning the band, the change was appropriate, particularly in the wake of a social media firestorm over the band’s visit.

The Daily Q reached out to the Media Majlis officials for more details about the reasons behind the decision to relocate Mashrou’ Leila event, but they have not yet responded. The Media Majlis’ statement on relocating the venue of the event surprised and disappointed many students. Tickets for the band’s NU-Q visit were sold out.