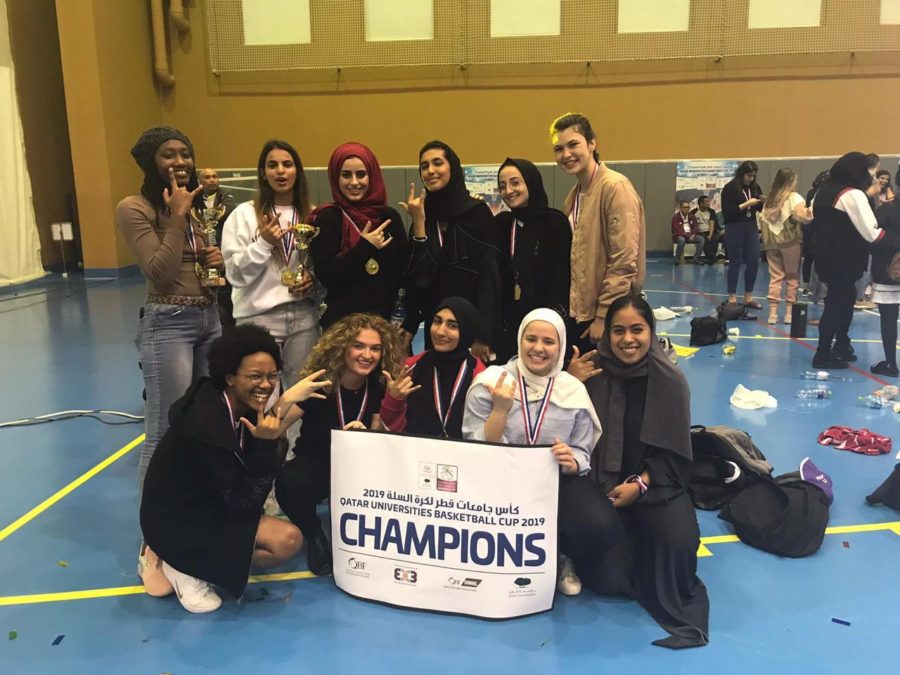 The team, led by captain Sarah Shaath, a journalism senior at NU-Q, edged Georgetown by the score 27-23.

“The NU-Q team has been a class act all season, and I have been lucky to share in their success. They earned it,” said Craig LaMay, team coach and journalism professor at NU-Q.  “I am impressed by them as athletes and proud of them as young women.”

Nostalgic about her last four years playing basketball, Shaath said that this win was her parting gift. “I want to dedicate this win to my hard-working team. I am so proud of each and every single member, whether they were on the bench or on court. We worked so hard as a team. We enjoyed the sport and enjoyed playing together.”

Hessa Al-Thani, top scorer of the league, said that the game was the toughest this season, but she is elated with the win. “I’m very proud of the team, we’ve been working hard this whole semester, trying to balance school work with basketball,” said Al-Thani.

The NU-Q team defeated Texas A&M University in Qatar’s women’s team in the semi-finals play-offs to reach the finals.

The men’s finals was also played on the same day. Texas A&M University at Qatar’s men’s basketball team beat Hamad Bin Khalifa University’s team by a difference of 10 points, with a final score of 52-42. Motaz Eledrisi as the top scorer of the league. “It was an amazing feeling, a well deserved championship from our team,” he said.

This also marked an important moment for the team captain and TAMU-Q senior, Taha Kubbar,  as this was his last match. “We all inspired each other and the best feeling is when you see all your hard work pay off and you come out with a win like that; a win we fought for together as a team,” said Kubbar.