Education City’s Green Dream: What does sustainability look like? 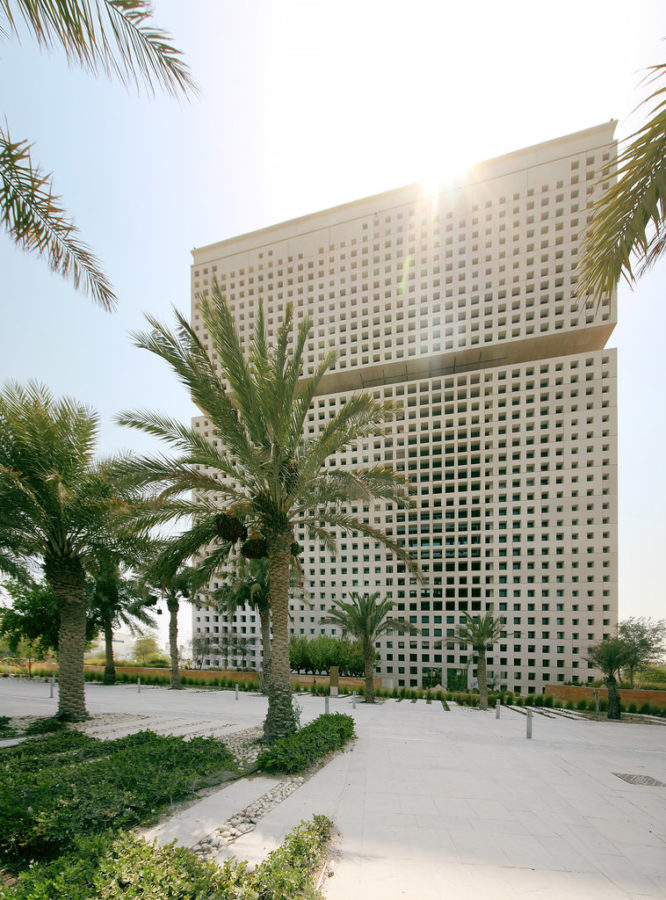 A sustainable world can only be achieved if each of us is more involved in fighting for it, whether it’s through social media or being involved in on-ground projects, according to Ovais Sarmad, Deputy Executive Secretary of the United Nations Framework Convention on Climate Change (UNFCCC).

At an earth talk hosted by Qatar National Library (QNL) on Sept. 11, Sarmad emphasized the need to work towards sustainability through collective action and for each of us to be mindful of our consumer choices.

Qatar has emphasized the need for speeding up efforts towards environmental sustainability and creating an “environmentally aware population” as one of the four pillars of Qatar’s National Vision 2030. With Education City as one of Qatar’s largest initiatives, the campus and its sister universities are charged with playing a major role in that vision, especially students, staff, and alumni.

“When I was a student at Georgetown University in Qatar here, I saw the first efforts of recycling I had seen in Qatar,” said Hessa al Noaimi, board member of Arab Youth Climate Movement about sustainability in Education City.

Matthew Nelson, Head of Residence Life at Student Housing and Residence Life, said that sustainability is one of the “core values within student housing.” The efforts towards this goal have led to a range of projects, from something as simple as recycling bins placed in numerous areas within housing to the LEED platinum construction of buildings and solar panels on top of the housing buildings.

Nelson acknowledged that the wind turbines erected outside student housing are not operational and have not been since the fall of 2017 because they need repair work. When they were working, the wind turbines generated 2-3 percent of the total electric usage, said Nelson. The solar panels account for about 10-12 percent of the power for Student Housing.

The use of plastic is a major topic of concern when it comes to environmental toxicity and sea water pollution. But about this issue, students say, Education City can do better.

“Even though there is metal cutlery available at the Global Café in Student Centre, we are still given plastic cutlery with our meals while dining in,” said Safoura Usmani, a freshman at Georgetown University in Qatar.

If unsustainable products are being provided, that is when you need to be “a conscious consumer,” according to Noaimi. “Fast fashion, plastic, all of these things you have to be very conscious about and very ethical with,” said Noaimi. These are matters of individual choice that can contribute towards environmental sustainability.

For some people, however, the unavailability of certain sustainable options hinders consumption. Such is the case with the absence of water fountains in the SHRL apartment buildings.

“I find it annoying that there’s no water fountain in the apartments especially because we had access to it in Suduq [the single room SHRL building], said Jade Chen, a sophomore at Northwestern University in Qatar (NU-Q) and an apartment building resident at SHRL. “Every time I go grocery shopping now, I buy extra water bottles because there is no guarantee that the tap water is clean.”

Nelson, however, encouraged students to use the tap water, emphasizing that the water is monitored and safe to drink, and further stated that Student Housing has looked into the installation of water fountains in its apartment buildings. However, it is currently only in the design stage, because of the significant changes that will be needed.

Nelson said that an environmentally unsustainable practice at housing is food delivery culture at Student Housing, which involves the constant movement of cars and motorcycles resulting in excess gas usage and exhaust generation. He said that the reason behind this is perhaps because the dining hall meals are not suited to the residents’ tastes. Jasna Chalangal, a student at Weill Cornell Medicine Qatar, said that “it [dining hall food] is almost the same every day and mostly bland so I don’t eat there much.”

To curb this issue, Nelson mentioned potential upcoming changes in the meal choices of the dining hall food that simultaneously serves sustainability issues and students having a healthier diet.

Students have also raised the matter of lights usage at night on campus. William Gitta, a freshman at NU-Q said, “Whenever I come to NU-Q the lights are always on. I’m not sure if we even need those at night or whether they are solar powered.”

It is a “mandatory safety feature,” and “public spaces and corridors are required to be lit,” said Ray Corcoran, director of Facilities at NU-Q. He also noted that the light bulbs are either LED or energy efficient rated with the system reducing the number of luminaries “to 50 percent from midnight to six in the morning.”

As for solar power, Corcoran said that there are solar power collectors fitted to a number of buildings across Education City, which put power into the Qatar Foundation (QF) grid. “This reduces the amount taken from Kahramaa [the company supplying electricity to EC],” Corcoran explained. These buildings include Texas A&M Qatar, Carnegie Mellon Qatar and Weil Cornell Medicine Qatar. While NU-Q itself has not been fitted with solar power units yet, it is in QF’s plans, Corcoran added.

To further the cause, separate entities within EC also seem to be supporting the community’s sustainability initiative in their own ways.

Recently at NU-Q, there was a change in the packaging of food orders for community events from plastic to paper. This material is “environmentally friendly but also keeps the integrity and safety of the food,” according to Asi Christy Marianta, Executive Assistant to the COO at NU-Q, who initiated this change.

“I am proud to say [that] we have two caterers for community-wide events that have complied with our requirement of environment friendly packaging,” said Marianta. She added that there was a two-month long planning and inspection process for the change in packaging to come into effect.

For the general public and other Education City universities, The Arab Youth Climate Movement will be holding more events at QNL as part of their earth talk series, according to Noaimi. Along with speaker sessions, these will include workshops to teach practical skills such as “How to measure energy consumption in your household.”