“I Feel Like a Part of Me is Still There”: Lebanese NU-Q Students Grapple with Transition Back to Student Life During Historic Protests 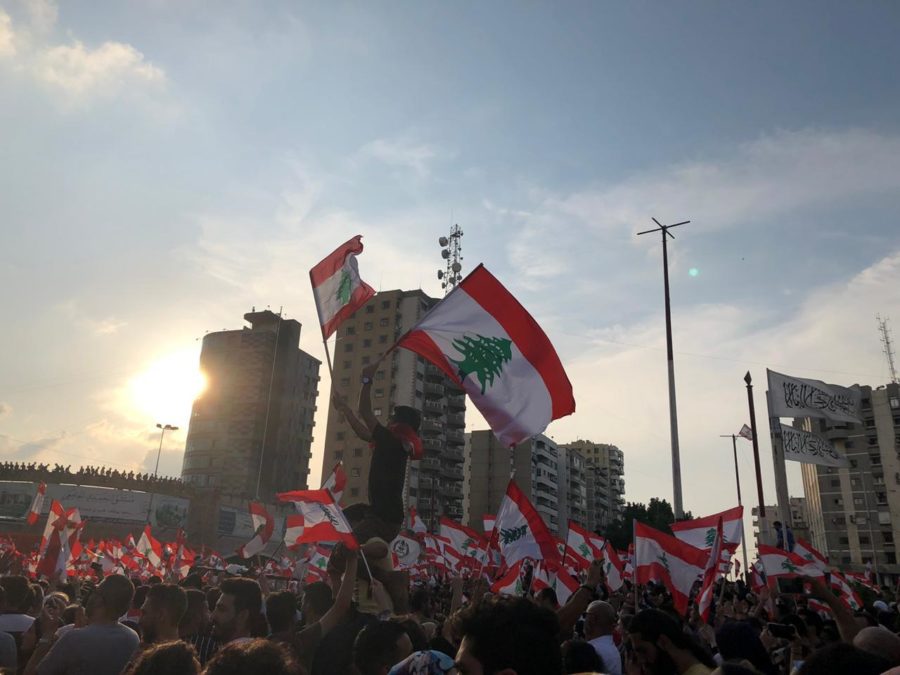 It was 2:30 p.m. on the Monday after Fall Break, and instead of walking into class, Northwestern University in Qatar freshman Kim Makhlouf was in Lebanon boarding a plane to Doha. She had arrived at the airport in Beirut eight hours earlier, afraid of missing her flight like she had the first one.

“It was an adventure,” she said. “It wasn’t violent, [the] closing down of roads, it was just people who wanted to protest and were like, ‘We’re sorry; we’re not opening this for anyone.’”

A series of massive protests in Lebanon, seemingly sparked by a so-called Whatsapp tax, have rocked the country for more than two weeks in a display of widespread popular unrest. Protesters are seeking to confront what they see as deep-rooted corruption and sectarianism, alongside an impending economic crisis.

For Makhlouf and Omar Shehab, two Lebanese freshman at NU-Q, Fall Break at home in Lebanon was an opportunity to experience the history-making demonstrations firsthand. Their return to Doha, however, has been complicated by mixed emotions, besides the road closures and missed flights in Lebanon.

For Shehab, 18, this show of unity has been emotional.

“The way [the Lebanese people] took to the streets, the way they are united through [the] different sects, it’s just beautiful,” he said.

Makhlouf agreed, saying, “To see people coming together as one entity, regardless of gender, age, religion, or all of that, to raise one flag for one mission, which is to get rid of all this corruption in the country, it’s not something you can miss.”

Since the movement has no leader, no single set of demands has emerged from protesters’ laundry list of concerns. However, the resignation of the government, who the protesters hold responsible for the country’s gridlock and economic decline, has become a rallying cry.

“One of the main slogans is ‘everyone means everyone,’” said Sami Hermez, an assistant professor of anthropology at NU-Q and author of War is Coming, a recent book on violence in Lebanon. This rallying cry is a call for the country’s leadership to step down.

Protestors appeared to achieve part of this goal when Prime Minister Saad Hariri tendered his resignation to President Michel Aoun on October 29, but Hermez cautioned that a complete replacement of Lebanon’s current administration might exacerbate the country’s political and economic issues.

“If the government collapses,” he said, “there would be a vacuum, and that could destabilize the economy and the currency even further.

“If the government resigns, that doesn’t solve anything,” he said, adding that any new leaders, who would be selected according to the quotas, “are going to come from the same ruling class.”

Some Lebanese are also concerned about the protests’ impacts on everyday life. Lebanese NU-Q sophomore and communications major Selina Atat said that because many Lebanese rely on the roads to get to work, the road closures have hampered their ability to earn a living.

Despite these drawbacks, protests have expanded beyond the Lebanese capital of Beirut.

“If you couldn’t make it to Beirut, or to big protests, there was something happening nearby so that everyone could participate,” said Makhlouf.

According to Hermez, when protests move outside the capital it shows that people of all incomes, education, and sectarian views want to see a change.

Makhlouf herself attended demonstrations repeatedly while she was in Lebanon. Afterwards, however, the transition back to NU-Q and away from the protests has been challenging. Her family and the people of Lebanon stay on her mind.

Shehab also said he struggled to be away from Lebanon during the monumental protests.

“I hate the fact that I left Lebanon,” said Shehab. “Honestly, I am so upset that I am no longer there with my people at a time like this, during something that I have been waiting for, for a long time.”

The only reason he’d left, said Shehab, was because of his father’s insistence that the protests not interfere with his studies in Qatar. Since he left Lebanon, however, Shehab has been unable to think of anything else.

“I can’t get any work done, because I am still glued to the screen trying to know more about what’s going on, about any updates that have happened,” he said. “I feel like a part of me is still there.”

The distance has been painful for Makhlouf as well, but she said she has found ways to participate from afar.

“I repost a lot of pictures, a lot of news, I make sure people are well-informed about what’s happening,” said Makhlouf. “It’s kind of like I’m there emotionally, but just not physically.”

Both students are hoping the demonstrations lead to a more viable political future for Lebanon.

“I hope I get to see the day where they accomplish all that they want during this political crisis,” said Shehab, “and I hope it comes soon.”